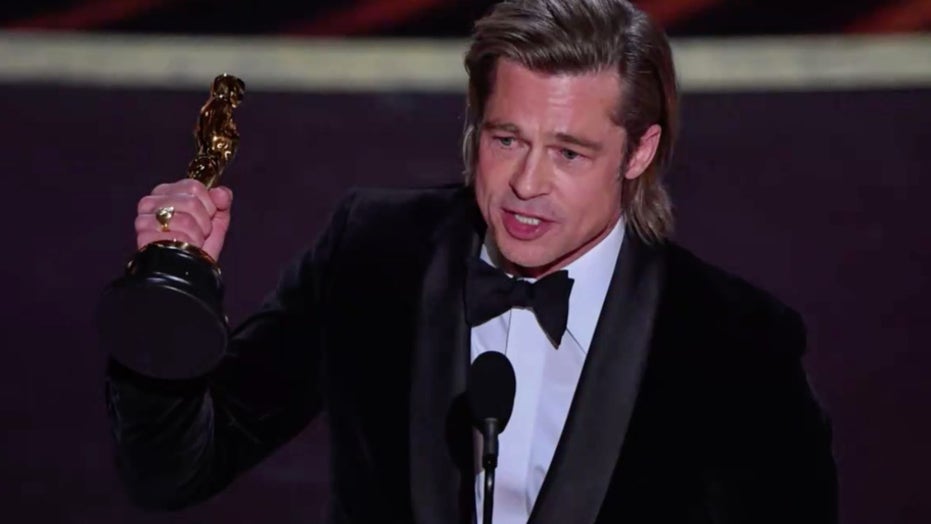 The four-time Academy Award nominee won the best-supporting actor accolade for his role as a stuntman in “Once Upon a Time in Hollywood.” The win marked his first-ever Academy Award win for acting. He immediately took the stage and got political by taking a jab at senators who voted against Democrats’ requests to call new witnesses in the impeachment trial, specifically former National Security Adviser John Bolton, who claimed he was willing to testify.

BRAD PITT'S DATING HISTORY: THE MANY FAMOUS WOMEN HE'S BEEN ROMANTICALLY LINKED WITH OVER THE YEARS

No new witnesses were called in Trump’s impeachment trial, for which he was ultimately acquitted by the Senate in a vote across party lines, with the exception of a lone Republican vote to convict coming from Sen. Mitt Romney.

BRAD PITT HAS 'NO COMPLAINTS' ABOUT LIFE: 'I GOT LOVELY KIDS... I LIKE MY DOGS'

Pitt had been expected to win the category after scooping up a series of honors this year, including at the Golden Globes and Screen Actors Guild Awards.

They told me I only have 45 seconds up here, which is 45 seconds more than the Senate gave John Bolton this week

Speaking backstage, the actor explained why he included a political jab in his Oscars acceptance speech.

"I was really disappointed with this week," he told reporters. "And I think when gamesmanship trumps doing the right thing, it’s a sad day and I don’t think we should let it slide, and I’m very serious about that."

Pitt was not the only actor to politicize his comments as Joaquin Phoenix used his lengthy, emotional best actor acceptance speech to discuss, among other things, the state of humanity, and the plight of cows.

"We feel entitled to artificially inseminate a cow, and when she gives birth, we steal her baby," Phoenix said after winning the Oscar for best actor. (Photo by Kevin Winter/Getty Images) (Getty)

"I think whether we’re talking about gender inequality or racism or queer rights or indigenous rights or animal rights, we’re talking about the fight against the belief, one nation, one race, one gender, or one species has the right to dominate, control and use and exploit another with impunity," the animal-rights activist said.

"We feel entitled to artificially inseminate a cow," Phoenix continued. "And when she gives birth, we steal her baby even though her cries of anguish are unmistakable and then we take her milk that’s intended for her calf and we put it in our coffee and our cereal."

Even socialist revolutionary Karl Marx was mentioned in a speech by Julia Reichert, the co-director of the Barack and Michelle Obama-produced Best Documentary winner "American Factory."

Reichert concluded her speech with a paraphrase of the "Communist Manifesto," written by Marx and Frederich Engels, stating "[W]e believe that things will get better when workers of the world unite."

Pitt’s politically driven tone was significantly different than previous wins, where he kept it light with jokes and breezy speeches. Pitt was more somber on Sunday, calling his win “incredible” as his peers cheered.

“‘Once Upon a Time in Hollywood,’ ain’t that the truth,” an emotional Pitt said before he thanked his children, Tarantino and DiCaprio.

“I’ll ride on your coattails any day,” he concluded of his co-star. “The view’s fantastic.”

Brad Pitt accepts the award for best performance by an actor in a supporting role for 'Once Upon a Time in Hollywood' at the Oscars on Sunday, Feb. 9, 2020, at the Dolby Theatre in Los Angeles. (AP Photo/Chris Pizzello)