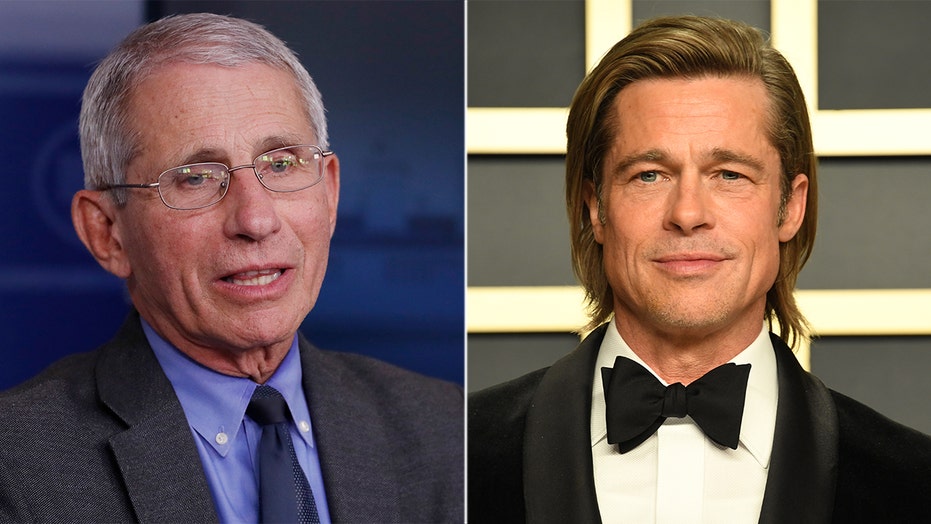 Brad Pitt has taken on a hilarious new role amid the coronavirus outbreak.

For the sketch, Pitt, 56, wore a suit, glasses and a grey wig as he sat at a desk in front of a bookshelf.

"Good evening, I'm Dr. Anthony Fauci," Pitt began. "First, I'd like to thank all the older women in America who have sent me supportive, inspiring and sometimes graphic emails."

Pitt's Fauci then addressed the "misinformation out there about the virus," and the "liberties" taken by the president in regards to recent guidelines.

"Tonight, I would like to explain what the president was trying to say," said Pitt in reference to President Trump's recent remarks concerning the coronavirus. "And remember, let's all keep an open mind."

First, a real-life clip of Trump claiming there would be a vaccine "relatively soon" was played before cutting back to Pitt.

"'Relatively soon' is an interesting phrase," he said. "Relative to the entire history of Earth? Sure, the vaccine's gonna come real fast. But if you were to tell a friend, 'I'll be over relatively soon,' and then showed up a year and a half later, well your friend may be relatively p---ed off."

Next came a clip of Trump saying that one day, the virus will disappear "like a miracle."

"A miracle would be great, who doesn't love miracles?" said Pitt's Fauci. " But miracles shouldn't be Plan A. Even Sully tried to land at the airport first."

In the next clip, Trump said that "anybody that needs a test gets a test," calling them "beautiful."

"A couple of things: I don't know if I would describe the tests as 'beautiful' unless your idea of beauty is having a cotton swab tickle your brain," said Pitt. "Also, when he said 'Everyone can get a test,' what he meant was: almost no one."

Another clip of Trump played, in which he suggested he's not sure "anybody even knows what [the virus] is."

"We know what it is," said Pitt simply.

The next clip was a recent one, in which the president suggests that an injection of disinfectant could help to fight the coronavirus.

Cut back to Pitt, who had no response, but his mouth hung open.

Then, Pitt addressed Trump's comments on ultraviolet light being used as a possible treatment for coronavirus patients.

With his head in his hand, Pitt said: "I know I shouldn't be touching my face, but..."

"Now, there is a rumor that the president is going to fire me," said Pitt, still in-character. "Let's see what he said about that."

A clip then played featuring Trump saying he won't fire Fauci, calling him "a wonderful guy."

"So yeah, I'm getting fired," said Pitt's Fauci. "But until then, I'm gonna be there putting out the facts for whoever's listening. And when I hear things like 'The virus can be cured if everyone takes the Tide Pod challenge,' I'll be there to say, 'Please don't.'"

Pitt then pulled off his wig and addressed the camera as himself.

"And to the real Dr. Fauci, thank you for your calm and your clarity in this unnerving time," said Pitt. "And thank you to the medical workers, first responders and their families for being on the front line."

He finished: "And now, live, kinda, from all across America, it's Saturday Night."

Several weeks ago, when asked who he'd like to play him on "Saturday Night Live," Fauci joked: "Brad Pitt, of course."