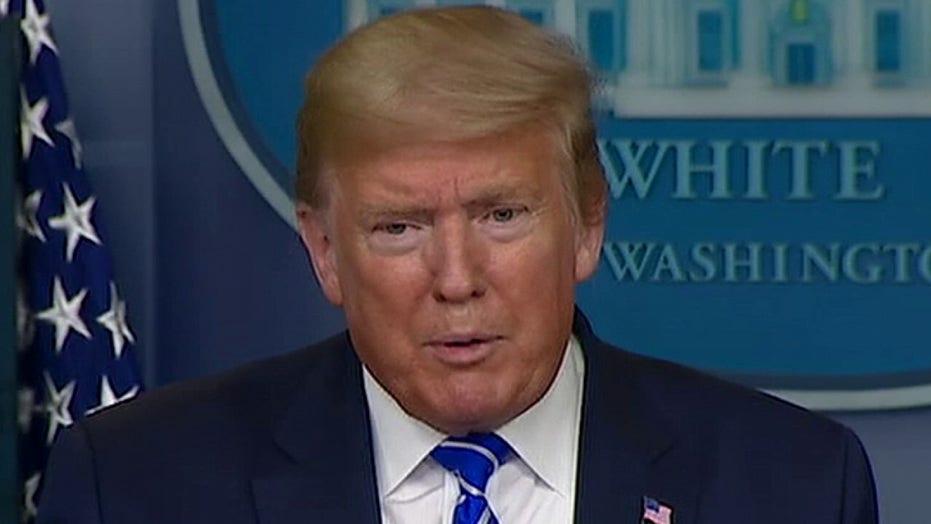 Bret Baier: Trump stepped in it with comment on injecting disinfectants to treat COVID-19

At a news briefing Thursday, Trump speculated on the effectiveness of several possible treatments for the virus, most notably by injecting disinfectant into the body.

"And then I see the disinfectant where it knocks it out in a minute. One minute,” Trump said. “And is there a way we can do something like that by injection inside or ... or almost a cleaning? Because you see it gets on the lungs and it does a tremendous number, so it will be interesting to check that. So that you're going to have to use medical doctors. But it sounds, it sounds interesting to me.”

The comment alarmed medical professionals around the world.  The president subsequently claimed on Friday that he was being "sarcastic," although at the press conference he was soberly addressing health experts on the coronavirus task force, urging them to launch a study.

Lysol parent company Reckitt Benckiser issued a statement Friday reminding people that "under no circumstance should our disinfectant products be administered into the human body (through injection, ingestion or any other route)."

In Maryland, the Emergency Management Agency received over 100 calls inquiring about the president’s suggestion, forcing the service to issue an alert to remind citizens that “under no circumstances should any disinfectant product be administered into the body through injection, ingestion or any other route.”

More concerning, though, is the number of people who actually went ahead with the suggestion.

In New York City, the Daily News reported that the Poison Control Center saw 30 cases of “exposure to Lysol, bleach & other cleaners in 18 hours after Trump’s suggestion” that cleaning products might be used to treat coronavirus. NYC Poison Control saw only 13 such cases in a similar period last year.

Anna Sanders, who wrote the Daily News article, reported that no one died or was hospitalized as a result.

The Illinois Poison Center had a 36 percent increase in March in calls statewide concerning "inappropriate use of disinfectants and cleansers,” according to Danny Chun,  a communications and marketing employee at the center. “Since the president made his remarks Thursday night, we have gotten two specific cases where we got calls.”

“A 36 percent increase overall since March is a huge increase," he said. "People were doing this already.”

Kentucky has seen a similar surge in calls. According to WDRB, the Kentucky Poison Control Center receives 1,000 calls a day related to COVID-19 issues. Usually, the center gets around 150 calls a day.

The American Association of Poison Control Centers confirmed to Fox News that there has been a general increase in poison control calls across the nation.

"Although NPDS does not provide a definite link between exposures and COVID -19 there appears to be a clear temporal association with increased use of these products."

Poisonous “cures” for coronavirus are not new, either.

In Iran, 300 people died after consuming methanol in the belief it would protect them from infection, with a further 1,000 falling ill, according to reports. The “cure” was suggested online and spread via social media.

Meanwhile, Florida courts last week ordered a self-described “church” to stop selling a supposed cure. The treatment contained chlorine dioxide, which the FDA warned would turn into bleach when mixed with other things.