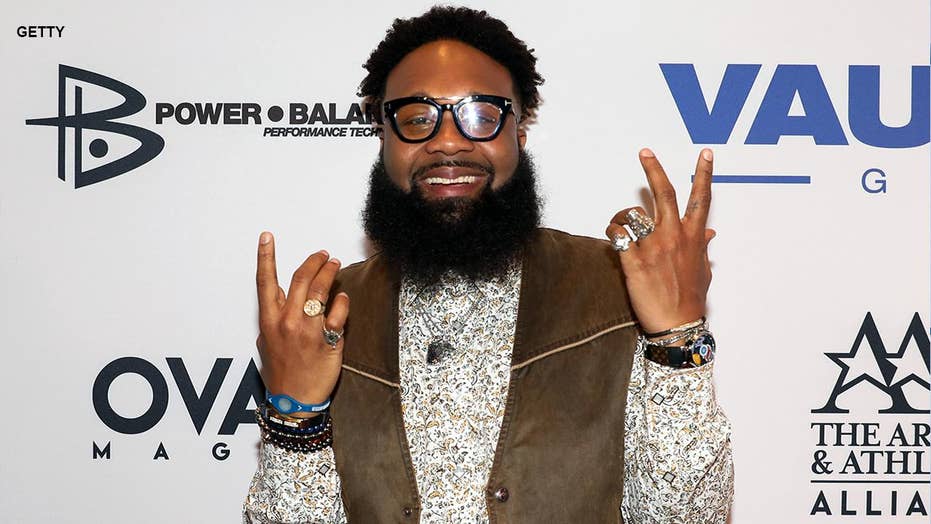 Blanco Brown reflects on the success of his viral hit ‘The Git Up.'

Blanco Brown says he doesn’t plan on slowing down following the mega success of his viral country smash, “The Git Up.”

LOS ANGELES – For Blanco Brown, the feeling his music gives others is more important than the success his multi-faceted career has brought him.

The 31-year-old Georgia native, whose real name is Bennie Amey, has a style all his own – fusing the grit of Johnny Cash and the groovy trap melodies largely made famous by Outkast. In May, Brown released his single, “The Git Up," which was an immediate hit with more than 2.5 billion viral video views across social media.

The singer, who garnered initial success writing and producing for other artists, sat down with Fox News to discuss the unimaginable ride he’s enjoyed on the way to his viral triumph and explained the meaning behind his debut album titled “Honeysuckle and Lightning Bugs.”

CHRISTIAN MUSICIAN DAVID CROWDER REFLECTS ON HIS JOURNEY: 'I KIND OF STUMBLED INTO THIS WHOLE THING'

“It's been an interesting ride. I take it one breath at a time, one stride at a time. And, you know, just try to continue to spread positive energy and purpose,” Brown said about the flurry of attention he has seen in the last 6 months since releasing “Git Up." (The catchy tune comes complete with its own accompanying viral dance.)

“I don't know what the future holds for me, but I will say that I'll continue to manifest my purpose and just keep this journey going; making great music with meaning. I mean, since ‘The Git Up’ took off in May and June, it's been nonstop; I don't plan on slowing down.

"I just want to keep on riding. It's what I do for a living, it's my calling and I just want to continue to spread the purpose. That's my living message."

Brown grew up in the projects of Atlanta, Ga. but would often visit his grandparents in rural Butler -- the combination of the two inspired the title for his debut album.

He added: “You know, the journey of writing these records, I started in 2011 – the end of 2011, beginning of 2012 and I've been building thus far. Eight years of putting this body of work together and I'm just glad to be on this journey, this course."

Brown said the culmination of the mainstream notoriety he’s experiencing has been more than eight years in the making and started while doling out hits for other artists, putting that “Blanco sauce” on it, as he put it.

“I've been writing and vocal-producing for so many artists over the years and just giving them a little sauce here and there – the little Blanco sauce--and I finally got a chance to just narrate my own stories and, you know, put the visuals together in the things that I always want to be a part of that I seen happening,” he said.

“It's a beautiful thing to be in my own pilot seat right now and have my label, Broken Bow Records and BMG like, supporting me. You know what I'm saying? It's a beautiful journey.”

Brown says he absolutely loves creating magic for other artists but, as his fans will soon find out, Brown is a sentimental person who values the idea of rareness and exclusivity – it’s made him a collector of sorts. Because of that, the “Tn Whiskey” performer said that writing for others doesn’t feel as significant as creating his own feel-good music from the ground up.

“It don’t hold the same sentimental value,” said Brown. “I appreciate writing for other people and then I appreciate the things that came to me, for me to narrate myself and make sure that people understand my journey. It's just two different worlds, but they all essentially work hand-in-hand.”

Brown said creating his overall body of work is a “meticulous” process, and developing his first-ever album was no different.

“Everything in my life is meticulous, you know what I'm saying? Like, I just make sure all the hairs are exactly where they're supposed to be and I put my heart into it,” he said. “And that's gonna be for every album, I don't see one being harder than the other or easier than the other. I got like 80, 90 trailer-trap records. So it's the same journey.”

Brown added of his musical influences: “Growing up the way I did listening to country music, Johnny Cash, and then pressing play on [Outkast's] 'Southernplayalistic,' you know what I'm saying – like, come on, man. Outkast was bigger than just rap. They were everything, they were music."

“Then Johnny Cash was like, whoever he wanted to be. He said whatever he wanted to say but he had that grit and he had that thing that still charmed folks. So those two worlds together, colliding is what I stand for, you know what I'm saying? [It’s] country music essentially, with 808s.”

But as far as creating his viral sensation “The Git Up,” Brown said he wrote the record in his bedroom and knew the song would reach the stratosphere because of how it made him feel, calling the sensation “magical.” He decided to lead with it as his first single, he said, because “the world really wasn’t dancing at the moment and I wanted to bring people joy as the record did for me.

“I started with the lap steel. I had never played a day in my life, so I re-tuned it to [chord] open E because I hit that first chord and it was like... it was horrible,” Brown said. “After that, I put the beatbox and the 808s, the snares, the high-hats, the spoons, anything I could find that'll make a nice sound, I put it on the record. I don't even know what all was on the record because I was picking up stuff.

“After that, I wrote the record and I was doing the dance at the same time and I put it all together – just made sure it worked together. And here we are, 'The Git Up,'” added Brown.

After “The Git Up” was released into the universe, Brown recalled the rate at which the song gained traction and said he often thinks about the timing at which everything seemed to fall into place.

“Yeah, it took off on its own. Like, there was not one red cent behind it. No marketing, no nothing,” said Brown. “So the world actually chose that record also and they made it what it was. You know how many people put out songs a day and the records never get heard globally? This record took off globally, thanks to social media and the record being on Tik Tok and Facebook and Instagram. It took the record to the next level.”

When asked where he picked up his work ethic, Brown opened up about his youth and his feeling that the value of something is whatever price someone is willing to pay – and folks are paying to work with Brown and to watch him perform.

“That's just me. That's who I became, you know, growing up. Like, I found myself collecting baseball cards and comic books and stuff and making sure they was in mint condition, and that was at age 7,” Brown said. “And I still have those same things in those same conditions – I've had them that many years. So that's just learned behavior from exactly what I liked in life.”

In reflecting on his latest album release and the success of “The Git Up,” Brown said he certainly feels the record will stand the test of time off the strength of the joy so many people have in singing and dancing along to it.

“I feel like it'll be around forever," he said. "Kids are taking their first steps to it, the first dance they know, the first line song they ever heard. And I say it's from [ages] 2 to 92 and beyond because the world is actually smiling and laughing and enjoying themselves to the record.

“Those types of records last forever – it's just a gift to me that I could create something that would, you know, be that pivotal moment in this world.”