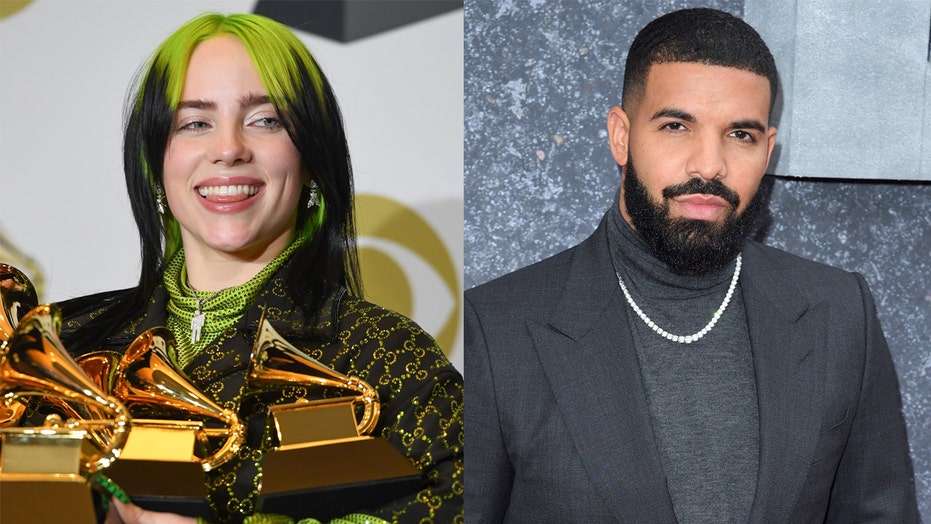 In 2019, the singer revealed to Vanity Fair that she texted with rapper Drake, who received backlash for engaging with a then-underage Eilish.

Now 18, Eilish is defending her relationship with the 33-year-old rapper in an interview with Vogue.

"The Internet is such a stupid a-- mess right now,” said Eilish of the negative response to her statements. “Everybody’s so sensitive. A grown man can’t be a fan of an artist?"

The "Bad Guy" singer said she felt there are more concerning things to worry about than Drake's taste in music.

"There are so many people that the internet should be more worried about. Like, you’re really going to say that Drake is creepy because he’s a fan of mine, and then you’re going to go vote for Trump?" she said. "What the f--k is that s--t?"

Eilish recently made history as the second person ever and the first woman to win all four major Grammy Awards in a single year. Similarly, she became the youngest artist to ever win album of the year.

Billie Eilish with the awards for best album and best pop vocal album for "We All Fall Asleep, Where Do We Go?", best song and record for "Bad Guy" and best new artist at the 62nd annual Grammy Awards. (AP Photo/Chris Pizzello)

"This is my first Grammys," the young pop star said when she received her song of the year trophy for "Bad Guy" on Jan. 26. "I never thought this would ever happen in my whole life. I grew up watching them. And this is my brother, Finneas [O'Connell], and he’s my best friend."

"I feel like I joke around a lot, and I never take anything seriously at these kinds of things, but I genuinely want to say I’m so grateful," Eilish added. "I only want to say that I’m grateful, and I’m so honored to be here amongst all of you. I love you to my core. I grew up watching all of you. Thank you to my team, my mom, my dad, my best friends... for keeping me alive to this day."