Jurors found Bill Cosby sexually abused a 16-year-old girl in the civil suit filed by Judith Huth, who accused the former comedian of sexual assault at the Playboy mansion in 1975 when she was a teen.

Huth, now 64, told Fox News Digital shortly after the trial: "Victory is right. Love it. Happy as can be."

She was just a teenager when she and a friend met Cosby at a Los Angeles-area park, where he was filming the movie "Let’s Do It Again."

The 12 jurors nearly reached a verdict on Friday, but were forced to begin deliberations again on Monday morning after Judge Craig Karlan was required to clear the courtroom at the Santa Monica Courthouse at 4:30 p.m.

Karlan, at first, indicated he would accept a partial verdict in the case, but then changed his mind when the bailiff informed him the building was closing and the Sheriff’s Department could not incur overtime expenses.

Nine of the 12 jurors — one was an alternate who stepped in on Monday — had to agree to reach a verdict on each issue with a "yes" or "no."

Bill Cosby's verdict was read on Tuesday in the civil suit filed by Judith Huth who accused the former comedian of sexual assault in 1975. Cosby attended a sentencing hearing in Norristown, PA, on Sept. 25, 2018.  (Bastiaan Slabbers/NurPhoto) 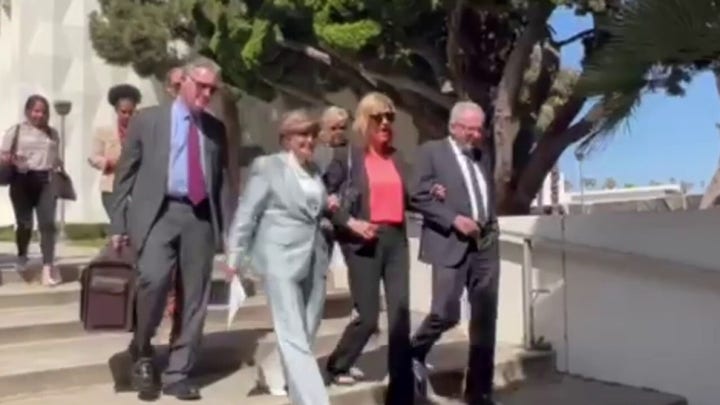 Cosby's representative, Andrew Wyatt told Fox News Digital: "This was a huge victory for us because they was looking for millions of dollars. That amount will not cover the legal bills, and we will be appealing that matter. However, Mr. Cosby will not be paying punitive damages."

Wyatt previously released a statement at 4 p.m. regarding the verdict: "We have always maintained that Judy Huth, Gloria Allred and their cohorts fabricated these false accusations, in order to force Mr. Cosby to finance their racist mission against successful and accomplished Black Men in America."

Wyatt allegedly spelled Gloria's last name "AwlfulRed" throughout the rest of the notice as he wrote, "all Americans had a front row seat to witness AwlfulRed’s true obsession with Mr. Cosby. Even Gloria AwlfulRed’s racist attempt to hijack and exploit Juneteenth in open court yesterday, during a civil trial for Actor & Comedian Bill Cosby, which she’s suing for million of dollars without the sheer evidence of proof, truth and/or facts."

He continued: "We exposed Ms. AwlfulRed’s hatred for Black Men in America. For these many reasons, Mr. Cosby continues to maintain his innocence and will vigorously fight these false accusations, so that he can get back to bringing the pursuit of happiness, joy and laughter to the world."

The questions presented to the jury were: "1. Was Ms. Huth under the age of 18 years when she was at the Playboy Mansion with Mr. Cosby?"

"3. Would a normal person, without hesitation, have been disturbed, irritated, offended or injured by Mr. Cosby's conduct?"

"4. Was Mr. Cosby's conduct motivated by an unnatural or abnormal sexual interest in Ms. Huth, a minor?"

"5. Did Mr. Cosby actually and reasonably believe Ms. Huth was at least 18 years of age when she was at the Playboy Mansion with Mr. Cosby?"

"8. Has Ms. Huth proved by clear and convincing evidence that Mr. Cosby engaged in the conduct with malice, oppression, or fraud?"

"9. This lawsuit was filed on December 2, 2014. Did Ms. Huth file this lawsuit within five years after the date she discovered, or reasonably should have discovered, that psychological injury or illness occurring after she turned 18 was caused by the conduct of Mr. Cosby?"

Judy Huth appears at a news conference outside the Los Angeles Police Department's Wilshire Division station in Los Angeles on Dec. 5, 2014. Huth won her civil suit against Cosby on Tuesday where she accused the former comedian of sexually assaulting her as a teen at the Playboy mansion in 1975 ((AP Photo/Anthony McCartney, File))

Jurors began deliberations Thursday morning following a two-week trial. Cosby was not in the courtroom.

Cosby lawyer Jennifer Bonjean requested a mistrial because of a photo taken by a member of Cosby's team showing a juror standing near one of the comedian's accusers who had been sitting in the audience.

Artist Lily Bernard, who has filed her own lawsuit against Cosby, said she had not talked to any jurors.

"I never spoke to any juror, ever," Bernard told the judge from her seat in the courtroom. "I would never do anything to jeopardize this case. I don't even look at them."

Huth alleged Cosby made her drink alcohol "as part of a game," then took her to the Playboy Mansion. There, according to the complaint, he took her into an isolated bedroom, kissed her on the mouth, slid his hand down her pants and used her hand to perform a sex act on him.

The 84-year-old was freed from prison last year after the Pennsylvania Supreme Court overturned his 2018 criminal conviction. In a snippet from a 2015 video deposition shown to jurors, Cosby denied having any sexual contact with Huth. His spokesman and attorney have each reiterated his denial throughout the trial.