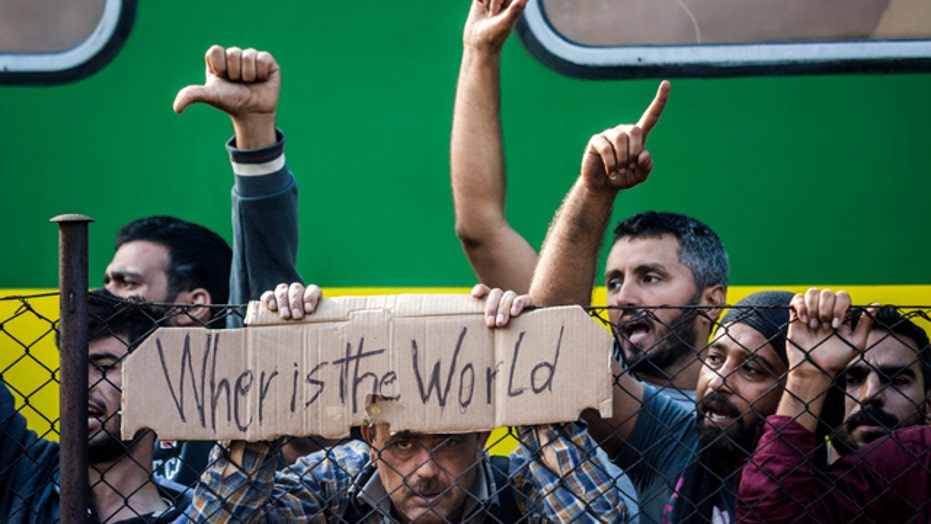 SKOPJE – Anger is mounting in nations along the path Middle Eastern and North African refugees are taking to Europe, where citizens and officials alike say the crisis is stretching resources and threatening security.

An estimated 1 million refugees, many from Syria, are making their way to European Union nations that have agreed to take them in. But their treacherous path crosses Greece and winds through Balkan nations including Macedonia and Serbia, which are finding themselves overwhelmed. Many blame European Union officials for making policy that has brought a wave of human misery across their borders.

"On the road towards the EU, refugees must undergo Balkan route, leading through Greece, Macedonia and Serbia to Hungary the first EU country,” Dusko Stojanovski, a professor of security and international crime at University American College, in Skopje. “Balkan countries are not members of NATO or the EU, and they have sensitive economies and defenses. The refugees have fueled crime and smuggling of people and other illegal businesses.”

"Macedonia is undergoing a severe crisis.”

The EU has allocated the equivalent of about $2.7 million to Macedonia and Serbia to aid refugees, an amount seen as woefully inadequate in nations where streets have become flooded with hungry refugees and mass transit is taxed to the breaking point. European and U.S. leaders are crafting policy on the fly even as the refugee crisis explodes, complain leaders in Macedonia. Finer points are expected to be hammered out next month at a meeting of European interior and foreign ministers in Paris.

More than 350,000 refugees, most fleeing war and Islamic terror in the Middle East, have already landed in Europe this year, according to the United Nations High Commissioner for Refugees (UNHCR). While the lion’s share are from Syria, thousands more have fled Eritrea, Somalia, Nigeria, Iraq and Sudan.

"Macedonia is undergoing a severe crisis,” Arlen Désir, France’s secretary of state for European Affairs, told FoxNews.com after touring a refugee rail crossing at the border between Macedonia  and Serbia. “Greece should introduce more border control, and build shelters for refugees coming from Turkey.”

Macedonian volunteers and police with refugees in Gevgelija, near the border of Macedonia and Greece. (FoxNews.com) ( )

Last month, Macedonia declared a state of emergency at its border with Greece, where an estimated 4,000 refugees already cross in on a daily basis. According to the UNHCR, more than 180,000 refugees with boats recently arrived in Greece and another 3,000 people per day are expected to arrive at the Greece’s northern border with Macedonia.

Just inside Macedonia, at a transit center set up near the border town of Gevgelija, volunteers from UNHCR, the Red Cross, and many Macedonian citizens are helping the current influx of weary refugees. They distribute water, food and medical assistance, and help process the necessary documents to send the refugees along to Serbia.

Trains headed to Belgrade are packed with hundreds of families and a large number of women and children. Many are intellectuals fluent in English and European languages, hoping to find a better life in EU countries.

Abad, an English-speaking economist from Syria, where a civil war has raged since 2011, hopes to find work in Germany.

"The Syrians want to get educated and work, they are hardworking people,” he told FoxNews.com. “I would like to use my degree and knowledge, to live well, I want to build my future, I can not have that in Syria. The war seems to last for years."

Serbian Minister of Internal Affairs Nebojsa Stefanovic warned that the wave of refugees is not near its peak. He said Serbia cannot send people back if they are passing through on their way to seek EU asylum.

"We have no right to stop these people to continue their journey when they come to Serbia and apply for asylum,” he said. “The only thing you can do is to make sure that their stay in our country is without incident."

Serbia is better equipped than Macedonia to accept refugees, with centers established in the border towns of Mitrovac and Presevo. The centers provide food, water, shelter and receive documents for transit within 72 hours, time to reach one of five centers in Serbia for asylum seekers. Still, most refugees stay outdoors in parks around Belgrade, and wash in city cisterns before continuing on through Hungary and into the European Union.

Refugees face a number of perils along their journey, including threats from the smugglers who help them along the way, price-gouging for food and water, police harassment, hunger and exhaustion.

"We face a risk to our life, loss of life at sea, in the trucks,” Syrian journalist Amir Deirvan told Radio Free Europe. “There are unpleasant situations with people to the borders of Macedonia, Hungary, Greece, Serbia, even in Turkey, there are many stories of human organs traders. But Syria is becoming impossible to live, and there is no prospect that the war will end soon.”

Refugees also encounter local populations that hold them in contempt, according to many.

"Some locals believe that refugees will bring diseases, infections and they make noise and left to much waste during their residence in the open," said Eftim Jovanov, of Gevgelija.

Most of the refugees are Muslim, prompting questions from potential host countries of why they want to relocate to predominantly Christian or secular nations. Macedonian ethnics studies Professor Aleksandar Cvetkovski said the refugees have seen what the largely Muslim-on-Muslim violence in their homelands has wrought, and seek the relative safety of the west.

"These people are fleeing the war in which both sides are Muslims, and have created many Muslim groups,” he said. “So they choose to go to countries where they would be exempt from this problem.

“They see diversity as richness,” he added.

Recent data shows that most asylum applications are from people of Syria, Iraq and Afghanistan seek to live in Germany, followed by France, Britain, Austria, Sweden and Belgium.

The EU plans to take in 800,000 refugees this year, with Germany taking the most. Although the policy has created a backlash in Germany, German Chancellor Angela Merkel has called the anti-refugee sentiment a “disgrace for Germany.”

French President Francois Hollande has agreed with Merkel that the European Union must bear the burden of the refugee crisis and establish a uniform system for giving asylum.

But the welcome mat being laid out by the west passes through Eastern Europe and the Balkans, where prime ministers of the Visegrad Group – composed of Hungary, Poland, Slovakia and the Czech Republic - reject the EU proposal for quota refugees to be distributed among EU Member States and are introducing security measures at borders.

They also are skeptical that policies dictated from Paris or Brussels can truly help control the wave of refugees. Instead, they believe the policies are increasing the tide of humanity, which includes an increasing number of people without legitimate claims to asylum.

"Everywhere where visas are mandatory, there are thousands of undocumented entries," said Deputy Prime Minister of the Slovak Republic Miroslav Lajcak.

The refugees have become a “threat to the internal structure,” added Serbian intelligence official Miroslav Lazanjski.