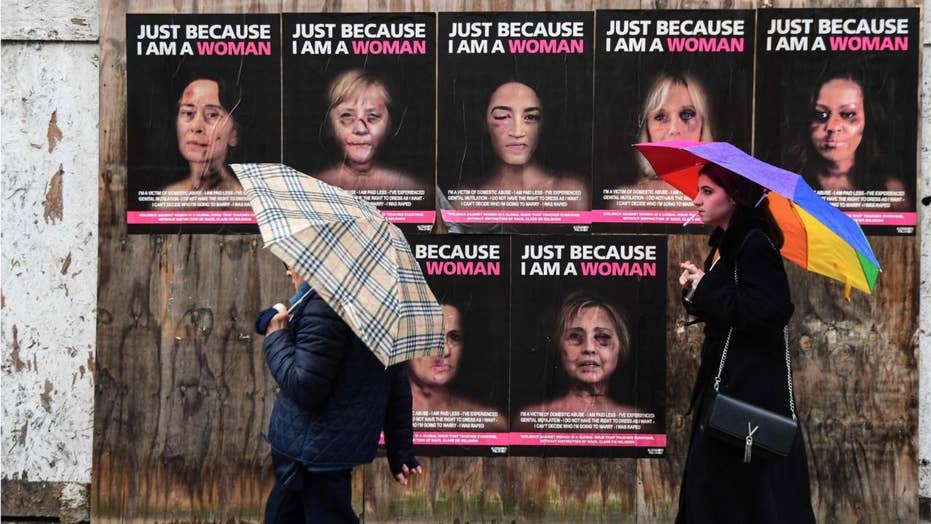 An Italian artist looking to raise awareness of violence against women has unveiled a series of posters featuring doctored faces of top political figures such as Hillary Clinton, Michelle Obama and German Chancellor Angela Merkel.

An Italian artist looking to raise awareness of violence against women has unveiled a series of posters featuring doctored, roughed-up faces of top political figures such as Hillary Clinton, Michelle Obama and Alexandria Ocasio-Cortez.

The "Just Because I am a Woman" campaign created by AleXsandro Palombo, which is currently on display in Milan, also features altered portraits of German Chancellor Angela Merkel and French first lady Brigitte Macron.

"I am a victim of domestic abuse. I am paid less. I've experienced genital mutilation,” reads a message underneath each of the posters, according to the BBC. “I do not have the right to dress as I want. I can't decide who I'm going to marry. I was raped."

A woman walks past a poster showing a manipulated picture of German Chancellor Angela Merkel with bruises and scars, during the street art campaign Just Because I am a Woman by Italian artist AleXsandro Palombo, in downtown Milan.

The posters note that such violence against women does not differ between races, classes or religions, the BBC points out.

In a statement, Palombo said he created the posters "to illustrate the drama that affects millions of women throughout the world... with the aim of denouncing, raising awareness and obtaining a real response from institutions and politics."

It’s not the first time Palombo has altered portraits of well-known figures to evoke a response.

In 2015, he rolled out a series of posters showing the doctored, battered faces of celebrities like Kim Kardashian and Angelina Jolie, next to a message that “No woman is immune from domestic abuse.”