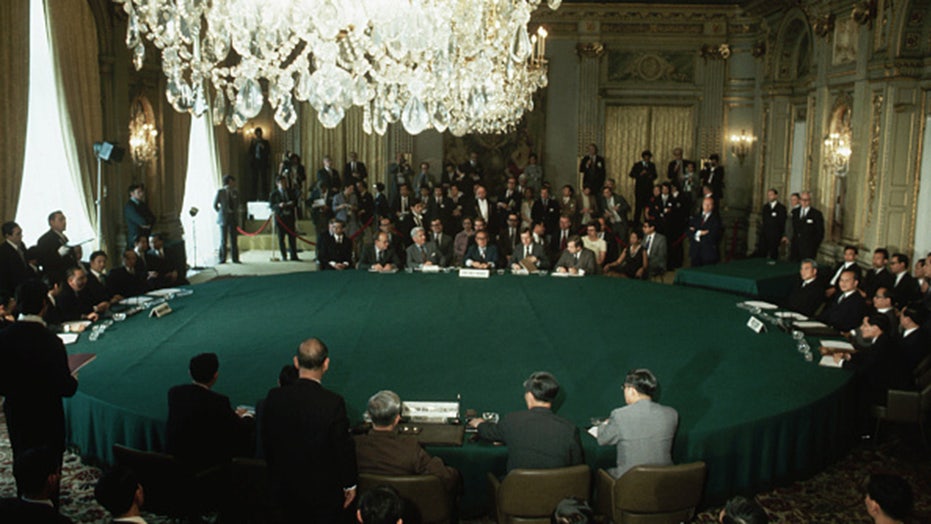 On this day in history, in 1973, the United States, South Vietnam, the Viet Cong and North Vietnam signed the Paris Peace Accords, which formally brought an end to the Vietnam War.

The Paris Peace Accords, or “An Agreement Ending the War and Restoring Peace in Vietnam,” brought an end to direct U.S. involvement in the war.

Representatives from the four factions of the Vietnam War meet in Paris to sign a peace agreement.  (Getty Images)

By that time, the United States had been waging war in Vietnam for more than a decade, having ramped up operations in 1965.

To appease South Vietnam, who was unwilling to recognize the Viet Cong as a legitimate partner in negotiating the terms of a cease-fire, references to it were omitted from the signing document.

The agreement established a cease-fire throughout Vietnam, and the United States agreed to remove all of its troops and advisors (totaling nearly 24,000) and dismantle its bases within two months. The North, in turn, agreed to release U.S. troops and other prisoners of war.

In the summer of 1976, the North and South unified as the Socialist Republic of Vietnam under communist rule that continues today.

Estimates of the number of Vietnamese killed range from about 2 million to nearly twice that number. The Vietnamese regarded the war as a continuation of their fight for independence from French colonial masters, and it was quickly followed by a border war with China in 1979.