Venezuela’s socialist regime failure is the single largest economic collapse outside war in over four decades, beating the fall of the Soviet Union or Zimbabwe’s collapse under Robert Mugabe, economists say.

The country’s economy – once touted as an example of a working socialist system – turned into a basket case over the years amid corruption and mismanagement by the socialist government that relied on oil revenues to pay for expensive government programs and prop up other industries.

Following the collapse in oil prices, the government’s corruption and lack of competency became apparent, leading to an unprecedented economic collapse that caused a humanitarian crisis and put the country on the verge of a civil war.

“It’s really hard to think of a human tragedy of this scale outside civil war,” Kenneth Rogoff, an economics professor at Harvard University and ex-chief economist at the International Monetary Fund (IMF), told the New York Times. “This will be a touchstone of disastrous policies for decades to come.”

“It’s really hard to think of a human tragedy of this scale outside civil war. This will be a touchstone of disastrous policies for decades to come.”

IMF economists say that similar levels of economic devastation can only be found in war-torn countries such as Libya following the downfall of Muammar Gaddafi or in Lebanon in the 1970s.

But unlike those countries, Venezuela hasn’t been engaged in an armed conflict that led to the downfall. The desolation is entirely the fault of the poor governance, corruption and ill-advised policies of President Nicolás Maduro and his predecessor, Hugo Chávez, the economists said, according to the Times.

The economic devastation led to a number of social problems, with armed gangs taking control of the towns as ordinary Venezuelans began to witness empty supermarkets, with their once-valuable money losing the entirety of its value in a day’s time.

US SUSPENDS ALL PASSENGER, CARGO FLIGHTS TO VENEZUELA

Some Venezuelans reportedly began scavenging through garbage to find leftovers, while retailers drove worthless piles of cash to deposit it in banks. 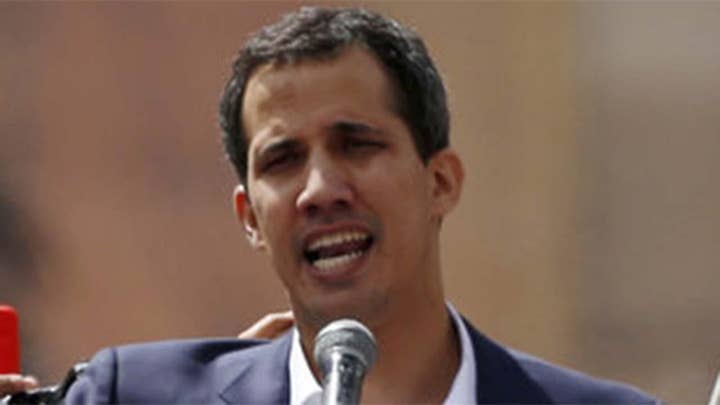 Amid the human misery, with shortages in medication and sanitation products, a political turmoil is also underway, with the country’s opposition leader Juan Guaidó declaring himself the interim leader of the country in an effort to oust Maduro and end his authoritarian regime.

Guaidó's legitimacy has been supported by virtually all Western counties. The challenge to the regime prompted brutal clashes between the people and the government forces.

Maduro, for his part, has blamed the humanitarian crisis and lack of medical supplies on the U.S. and its allies, saying the sanctions caused the economic downturn, a claim contradicted by economists who say the devastation began before the tough sanctions regime.