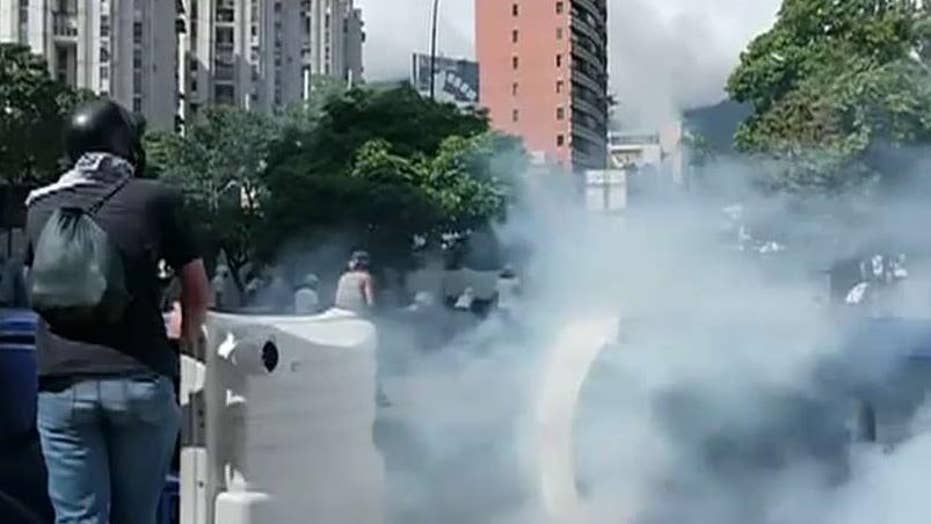 Russia and China back President Nicolas Maduro while the U.S., Canada and much of South America recognize opposition leader Juan Guaido as the interim president; Steve Harrigan reports on what happens next.

The re-invigorated political standoff between Nicolas Maduro and his vocal and inspired opponents has turned the gaze of the international community towards Venezuela’s humanitarian and economic plight, increasing pressure on the socialist leader.

The South American country is navigating uncharted political waters after congress chief Juan Guiado declared himself interim head of state on Wednesday and demanded democracy and free elections – quickly garnering the diplomatic backing of the United States. Maduro however has been backed by the likes of Russia and China.

“The citizens of Venezuela have suffered for too long at the hands of the illegitimate Maduro regime,” President Donald Trump said in a tweet officially recognizing Guaido as the Interim President of Venezuela on Wednesday.

“The people of Venezuela have courageously spoken against Maduro and his regime and demand freedom and the rule of law,” he said in a White House statement.

In a seemingly coordinated and united front, Canada, and some Latin American and European countries echoed President Trump, saying they supported Guaido’s claim to the presidency.

“The people of Venezuela are bravely working for a free future for their country,” German government spokesman Steffen Seibert tweeted on Thursday. “This now requires a political process that results in free and credible elections.” 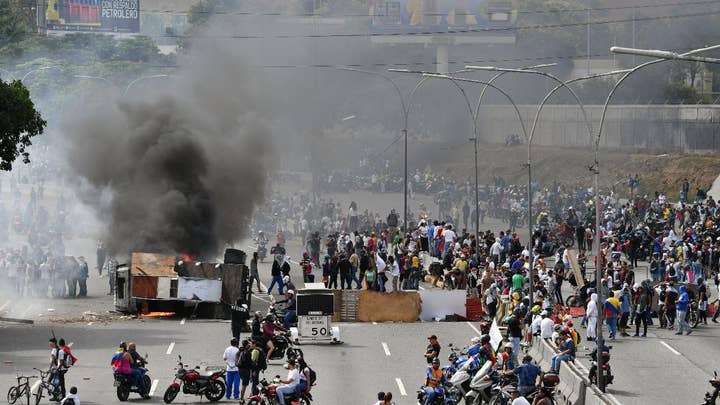 Maduro, who started his second term as president on January 11 after highly disputed elections and accusations of undemocratic actions, responded in kind. He broke off diplomatic relations with the U.S. – its biggest trading partner for the oil-exporting nation – and recalling the long history of heavy-handed U.S. interventions in Latin American.

“Don’t trust the gringos,” he thundered to a crowd of red-shirted supporters gathered outside the presidential palace. “They don’t have friends or loyalists. They only have interests, guts and the ambition to take Venezuela’s oil, gas and gold.”

Washington said it would ignore the order to remove its diplomats in 72 hours.

Maduro has received the backing from China, Iran, Syria, Cuba, Turkey and Russia – who commended the actions of the opposition as an “attempted coup” backed by the U.S.

MADURO SEVERING VENEZUELAN RELATIONS WITH US

Russia has been propping up Maduro with arms deliveries and loans. Maduro visited Moscow in December, seeking Russia's political and financial support. Over the last decade, China has given Venezuela $65 billion in loans, cash, and investment. Venezuela owes more than $20 billion.

"Venezuela is friendly to us and is our strategic partner," Russian Deputy Foreign Minister Sergei Ryabkov told the International Affairs. "We have supported them and will support them."

He also warned against any U.S. military intervention in Venezuela, saying it would be a "catastrophic scenario that could shake the foundations of the development model which we see in Latin America."

Tension, unrest in Venezuela as opposition leader declares himself president

The European Union called for Venezuelans authorities to respect the “civil rights, freedom and safety” of Guaido, but stopped short of recognizing him as interim president.

"On 23 January, the people of Venezuela have massively called for democracy and the possibility to freely determine their own destiny. These voices cannot be ignored,” EU foreign policy chief Federica Mogherni said in a statement. “The EU strongly calls for the start of an immediate political process leading to free and credible elections, in conformity with the constitutional order.”

The U.N. chief has called for dialogue and says violence or escalation should be avoided.

"It is absolutely essential to have dialogue, to avoid violence and to avoid escalation,” United Nations Secretary-General Antonio Guterres said at the World Economic Forum in Davos.

Tensions began ramping up earlier this month as Maduro took the oath of office for a second six-year term won in an election last May that many in the region contend was not free or fair because his strongest opponents were barred from running.

The assault on Maduro's rule came after large crowds gathered in Caracas waving flags and chanting "Get out, Maduro!" in what was the biggest demonstration since a wave of unrest that left more than 120 dead in 2017.

Marco Ponce, a coordinator with the Venezuelan Observatory of Social Conflict, a human rights monitoring group, said at least 12 had been killed overall, giving names but no details on the other cases.

Amid the showdown, all eyes are on the military, the traditional arbiter of political disputes in Venezuela — and to which Guaido has been targeting his message.

The 35-year-old Guaido has the near-impossible task of pushing forward the transition of power without control over crucial state institutions and armed that have disavowed him.

Several generals, each standing behind rows of green-uniformed officers, appeared on state television early Thursday to profess their loyalty to the embattled president.

"The people of Venezuela in their exercise of a free and secret vote chose citizen Nicolas Maduro Moros to be their president," Major General Manuel Gregorio Bernal said.

Maduro has relied extensively on the military to maintain power amid the country’s growing economic hardships and humanitarian crisis.

“While it’s true that Guaido has been recognized internationally, the real power of the state is still in the hands of Nicolas Maduro,” Ronal Rodriguez, a political science professor who focuses on Venezuela at Rosario University in Bogota, told Reuters.