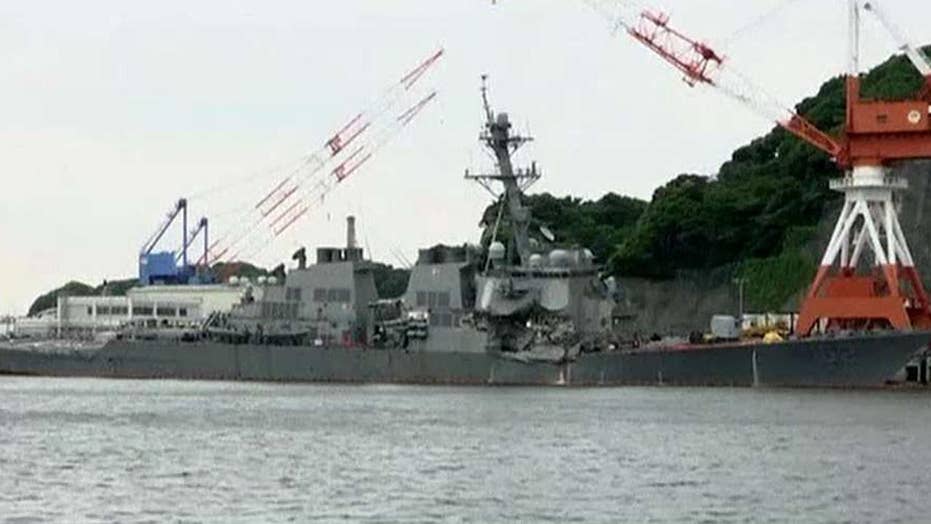 The search for seven missing U.S. Navy sailors was called off Sunday after several bodies were recovered from the flooded compartments of the destroyer.

Commander of the Navy’s 7th Fleet told the grim news to reporters at a Navy base in Yokosuka, just south of Tokyo. Vice Adm. Joseph Aucoin wouldn’t say how many bodies were found but said the identities of the sailors would be released following notification of the families.

The bodies were found in previously flooded compartments, including sleeping quarters.

Searchers gained access to these spaces that were damaged during the collision and brought the remains to Naval Hospital Yokosuka where they are to be identified, the Navy said in a statement.

The USS Fitzgerald was back at its home port in Yokosuka Naval Base south of Tokyo by sunset Saturday. The Philippine-flagged container ship was berthed at Tokyo’s Oi wharf, where officials were questioning crew members about the cause of the nighttime crash.

After stabilizing the USS Fitzgerald, the destroyer USS Dewey had joined other American and Japanese vessels and aircraft in the search for the missing sailors.

The U.S. 7th Fleet said in a statement that the crash damaged two berthing spaces, a machinery room and the radio room. Most of the more than 200 sailors aboard would have been asleep in their berths at the time of the pre-dawn crash.

Water was being pumped out of flooded areas and it was unclear how long it would take to get into the crushed mid-right side of the ship once it was at the pier in Yokosuka, the statement said.

An injured USS Fitzgerald personnel is carried by U.S. military personnel, left, and Japanese Maritime Self-Defense Force members upon arriving to the U.S. Naval base in Yokosuka (Japan's Defense Ministry via AP)

Nippon Yusen, the Japanese shipping company that operates the container ship, said in a statement it is collaborating with the ship owner and fully cooperating with the investigation by the coast guard. The 29,060-ton ship is Philippine-flagged and all the crew are Filipinos.

The USS Fitzgerald's captain, Cmdr. Bryce Benson, was airlifted early Saturday to the U.S. Naval Hospital in Yokosuka and was in stable condition with a head injury, the Navy said. Two other crew members suffered cuts and bruises and were evacuated. It was unclear how many others may have been hurt, but they remained on board for the 16-hour journey back to port in Japan following the collision, officials told Fox News.

Benson was in his stateroom at the time of the collision, officials tell Fox News. The stateroom aboard a guided-missile destroyer is located on the right side of the ship and below the bridge, and was destroyed when the cargo ship crushed the destroyer. The collision also caused severe damage and flooding to berthing spaces, the radio room and an auxiliary (machinery) space.

The Navy said that the collision occurred 56 nautical miles (103 kilometers) southwest of Yokosuka, home to the 7th Fleet.

"Right now we are focused on two things: the safety of the ship and the well-being of the sailors," said Adm. Scott Swift, commander of the U.S. Pacific Fleet.

Conditions were clear at the time of the collision, though Yutaka Saito of the coast guard said the area is particularly busy with sea traffic.

The names of the sailors were being withheld pending notification of their families. U.S. Navy personnel set up support and counseling services to help families as they sought updates on crew members.

"Just heard the sweetest voice and saw a wonderful face. He's okay. Thank you all for the prayers," Rita Schrimsher of Athens, Alabama, tweeted after speaking with her 23-year-old grandson, Jackson Schrimsher, via Facetime.

"It could have been worse, so we're grateful," she said by phone.

The USS Fitzgerald collision is the third mishap since February involving Navy warships near Japan.

In February, USS Antietam, a guided-missile cruiser, damaged its propellers and spilled hydraulic oil into the ocean after running aground off the coast of Japan. At the time, officials told Fox News the warship had dragged its anchor after 30 knot winds blew the ship from its anchorage onto shoal water grounding the ship.

Last month, USS Lake Champlain a guided-missile cruiser hit a South Korean fishing boat, near the Korean peninsula but no injuries were reported.