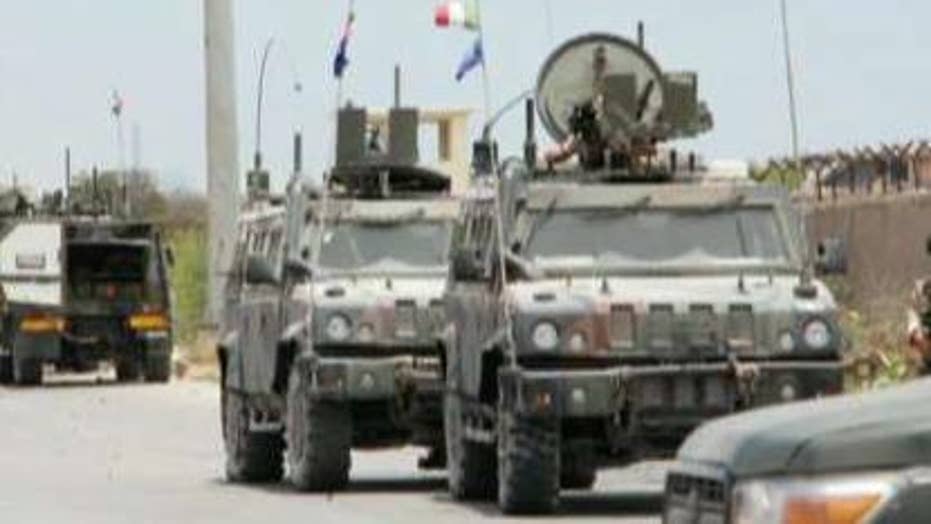 Al-Shabab extremists attack US base in Somalia

The United States Embassy in Mogadishu, Somalia, has reopened after being closed for 28 years, officials said Wednesday.

"The reestablishment of Embassy Mogadishu is another step forward in the resumption of regular U.S.-Somali relations, symbolizing the strengthening of U.S.-Somalia relations and advancement of stability, development and peace for Somalia and the region," the embassy said in a statement.

The embassy closed on Jan. 5, 1991, after Somalia became engulfed in a civil war and the regime of Siad Barre was overthrown.

The United States reestablished a permanent diplomatic presence in Mogadishu back in December, operated out of Nairobi, Kenya.

“Today we reaffirm the relations between the American people and the Somali people, and our two nations," Ambassador Donald Yamamoto said. "It is a significant and historic day that reflects Somalia’s progress in recent years, and another step forward in regularizing U.S. diplomatic engagement in Mogadishu since recognizing the federal government of Somalia in 2013."

The U.S. "remains a strong partner to Somalia in its effort to build a stable, credible, and democratic country," the embassy said.

AL-SHABAB EXTREMISTS ATTACK US MILITARY BASE IN SOMALIA, OFFICIALS SAY

The Al Qaeda-linked al-Shabab extremist group has been responsible for several attacks in Somalia this year, as it attempts to topple Somalia’s weak U.N.-backed government.

On Monday, militants staged an attack on a U.S. military base that is used to launch drone strikes.

In July, al-Shabab assailants attacked a Somali hotel and killed 26 people -- including two Americans -- in an all-night siege.

Also in July, Mogadishu's mayor Abdirahman Omar Osman was badly injured when a suicide bomber walked into his office and detonated explosives.

Al-Shabab claimed responsibility for the attack.

Fox News' Lucas Tomlinson, Danielle Wallace and Lucia I. Suarez Sang contributed to this report, as well as The Associated Press.