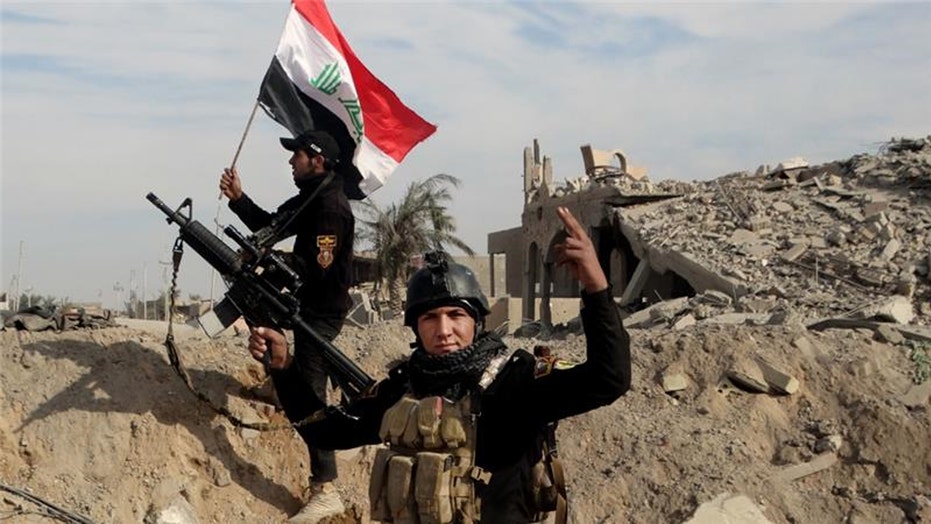 US backs Iraqi forces to retake ISIS-held Fallujah: Why now?

The U.S. military launched airstrikes and advised Iraqi government forces in their push to recapture the city of Fallujah from Islamic State fighters Monday, a U.S. military spokesman based in Baghdad confirmed to Fox News.

Col. Steve Warren said the U.S. was advising the Iraqis at operation centers in Baghdad and Taqaddum.

Iranian-backed Shiite militias -- whose forces were located on the outskirts of town -- reportedly tried to play a role in the Fallujah operation, but Col. Steve Warren said the U.S. military would not support those forces.

"We are not going to drop bombs in support of the Shiite militias," he told Fox News by phone.

Warren estimated that there are between 500 and 1,000 ISIS fighters in Fallujah, along with 50,000 civilians.

ISIS captured the city roughly 40 miles west of Baghdad in January 2014. Since May 17, U.S. airstrikes have destroyed 21 ISIS targets in Fallujah, Warren said.

The U.S. support for the Iraqi military aimed to mirror recent operations that pushed ISIS out of the western town of Rutbah -- near Iraq's border with Jordan -- and Hit and Ramadi, also in Iraq's Anbar Province, according to Warren.

Following a string of bombings that killed hundreds of Iraqis in Shiite neighborhoods in Baghdad, the Iraqi government prioritized the operation to clear ISIS from Fallujah ahead of plans to recapture Mosul, located roughly 250 miles north of Baghdad.

The commander of the Fallujah operation, Lt. General Abdul-Wahab al-Saadi, could not say how long the offensive would take, citing terrain, the number of civilians in the city and bombs planted by the militants. Al-Saadi added that the first phase aimed to surround and bomb ISIS positions.

Federal police battalion commander, 1st Lt. Ahmed Mahdi Salih, said ground fighting was taking place around the town of Garma, east of Fallujah, considered the main supply line for the militants. ISIS holds the center of Garma and some areas on its outskirts.

Col. Mahmoud al-Mardhi, who is in charge of paramilitary forces, said his troops recaptured at least three agricultural areas outside Garma. Al-Mardhi added that airstrikes and artillery shelling intensified against ISIS positions inside Fallujah.

In the early days of the Sunni-led insurgency that followed the 2003 U.S.-led invasion that toppled Saddam Hussein, Fallujah emerged as the main stronghold for different militant groups opposed to American forces. The main group was Al Qaeda in Iraq, which later spawned ISIS. Fallujah was the site of two bloody battles against U.S. forces in 2004.

Since August, Fallujah has been under siege by government troops, who have prevented the entry of food and medicine into the city. Residents seeking to flee the city have sometimes found themselves trapped by the militants, who aim to retain Fallujah's civilian population as human shields against a full-scale government assault.

As of Monday, there was no evidence of mass displacement from the city or surrounding areas, but the U.N. Refugee Agency, UNHCR, said in a statement that around 80 families are reported to have fled Fallujah over the past few days. UNHCR says it has emergency stocks in Baghdad of 10,000 tents and 10,000 core relief items — such as sanitary kits and food and water supplies — that can assist families.

Flanked by senior military commanders, Iraqi Prime Minister Haider al-Abadi announced the beginning of military operations in a televised speech late Sunday night. He vowed to "tear up the black banners of strangers who usurped this city" and hoist the Iraqi flag.