Video surfaces of UN peacekeepers under attack in Lebanon

Hezbollah believed to be responsible for the ambush that happened 5 miles from the Israel border; David Lee Miller reports.

The United Nations Security Council is expected to renew the yearly mandate of its UNIFIL, its peacekeeping force in Lebanon, this week.

But exclusive video obtained by Fox News shows a peacekeeping patrol under attack by the U.S.-designated terrorist group Hezbollah. An intelligence source confirmed to Fox News the Iranian proxy force was behind the attack.

While the U.N. described the attack in a report, the video and the ensuing chaos following the ambush show how dangerous Hezbollah has made the situation for UNIFIL, or the United Nations Interim Force in Lebanon.

The video shows groups of men block off the convoy with their cars. Once blocked off several men set upon the vehicles, trying to break in through the windows with hammers and stones.

“This is clearly a Hezbollah-coordinated operation,” said Tony Badran, a research fellow at the Foundation for the Defense of Democracies.

Badran, who has testified to Congress about the terror group, said: “Hezbollah's freedom of maneuver in the south is absolute… which leaves UNIFIL in a sort of awkward situation where they not only can't do anything but don't want to do anything either for fear of the kind of incidents that we saw in the video.”

Hezbollah is believed to have an arsenal of some 150,000 rockets that can reach nearly all of Israel. Iran continues to fund its proxy by giving it hundreds of millions of dollars each year.

The U.N. described the attack as one of the “most serious incidents involving UNIFIL personnel in recent years.”

A report filed by the U.N. on the incident in the village of Majdal Zun - just five miles from the Israeli border - said the attack happened because the peacekeepers were taking pictures.

“The United States has considered Hezbollah a terrorist organization for more than two decades,” a State Department official told Fox News. “We have made clear our deep concerns about Hezbollah terrorist activities and hostile actions which threaten Lebanon’s security, stability and sovereignty.  We have reiterated these concerns publically and to the Lebanese government.”

Andrea Tenenti, a UNIFIL spokesman, told Fox News that a report by the Lebanese military given to the U.N., “diverged from the findings of UNIFIL which noted that organized civilians, some armed and illegally carrying assault weapons and were responsible for the violent attack on the peacekeepers.”

Tenenti said the Lebanese military’s investigation failed to attribute responsibility for the attacks or offered a way to bring the perpetrators to justice.

“To date, no criminal proceedings have been launched against any of the attackers," Tenenti said.

Israel’s UN ambassador Danny Danon upon seeing the video broadcast on Fox News said, “Hezbollah’s blatant attack against UNIFIL is further proof of the need to change the peacekeeping force’s mandate. The international community must summon the determination required to empower UNIFIL to combat the terrorist organization.”

U.N. peacekeepers were sent to Lebanon in 1978 following the passage of U.N. Security resolutions 425 and 426.

After the 2006 war between Israel and Hezbollah, the U.N. Security Council passed resolution 1701, which in part called on UNIFIL to assist the Lebanese military in establishing an area free of any armed personnel, assets and weapons other than the government and UNIFIL. The budget of UNIFIL for 2018-19 was $481 million. The U.S. is the biggest donor to U.N. peacekeeping, paying around a quarter of its total $6.5 billion budget.

Two former UNIFIL peacekeepers spoke to Fox News about their experiences. Neither gave their name due to the sensitive nature of their jobs. The first, a French national who served two tours of duty with UNIFIL, told Fox News it was not possible to do the job of patrolling properly under the present mandate.

“What can we say about UNIFIL’s attitude," he said, "when decisions and orders are taken with the aim of avoiding issues with Hezbollah?"

He said they are prohibited from doing such things as patrolling and taking photos in Hezbollah villages. 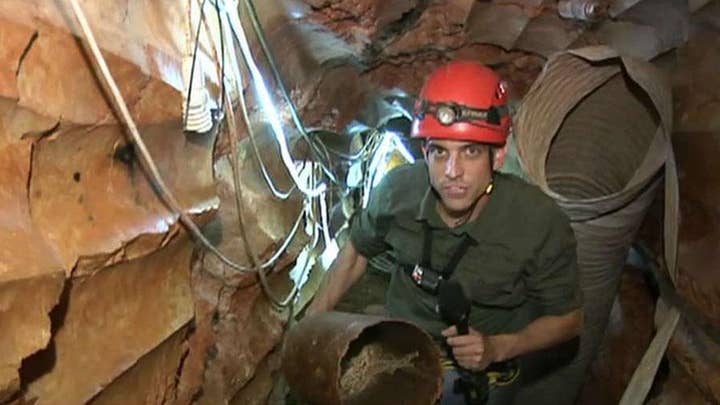 Hezbollah can muster up thousands of members in a short time, according to the former peacekeeper. Members could be working in a bar or in a restaurant and can be called to action very quickly. This reduces the capacity of the U.N. peacekeepers, he said, adding, “we have a real army in front of us.”

Another former peacekeeper, a major, who served two tours in Lebanon, told Fox News that the level of intimidation of the peacekeepers by Hezbollah is considerable. He mentioned three or four incidents where convoys were blocked from patrolling areas of interest, and where rifles and communications equipment was taken from the patrols.

He said that in his experience the Lebanese Armed Forces are sharing information 100 percent with Hezbollah. He said Hezbollah is the strongest non-governmental army on the planet and they are the ones who call the shots.

“During my stay we were always warned that (the) information you give to the (LFA) is going to Hezbollah," he said.

He stated that whenever UNIFIL has tried to be “too active," Hezbollah sends a clear message to U.N., as was the case when Hezbollah was training men for the Syrian battleground.

“When some of the battalions tried to go (and) observe these activities their movement has been blocked, and they have been given a 'fair warning' not to continue their activity. Areas have been marked as UNIFIL 'no-go-areas.'”

Tenenti told Fox News that “interruptions in UNIFIL’s movements are minuscule in relation to the large volume of UNIFIL operational activities, which total more than 450 every day.”

He said from January to July of this year only nine out of thousands of its operational activities were “interrupted.”

While questions sent to Lebanon’s UN mission were not answered, Ambassador Amal Mudallali told the Security Council last week that her country strongly supports UNIFIL and is fully committed to the implementation of resolution 1701.

The FDD’s Tony Badran said the administration needed to carefully rethink its strategy for Lebanon, calling the present policy “an abject failure.”

“U.S. policy in Lebanon," Badran said, "has relied on the support of the Lebanese armed forces under the assumption, or the hope, that it would somehow assert Lebanese sovereignty against Hezbollah. This is an illusion.”

The U.N. Security Council will meet Thursday afternoon and is expected to give its blessing to UNIFIL and roll over its mandate for another year.