Venezuelan migrants under the Simon Bolivar International Bridge plead for people to support them with food and water so they can continue protesting in La Parada near Cucuta, Colombia, Sunday, on the border with Venezuela. (AP Photo/Fernando Vergara)

The United Nations is condemning violence at points on the Venezuelan border where opposition figures have been trying to bring in aid shipments, according to a statement tweeted Sunday.

“The Secretary-General appeals for calm and urges all actors to lower tensions and pursue every effort to prevent further escalation,” Stephane Dujarric, spokesman for Secretary-General António Guterres, said in a statement Sunday.

Opposition leader Juan Guaido has called on the international community to consider “all options” to resolve Venezuela’s crisis, a dramatic escalation in rhetoric that echoes comments from the Trump administration hinting at potential U.S. military involvement.

“The Secretary-General is following with increasing concern the escalation of tensions in Venezuela.  He was shocked and saddened to learn that a number of civilians lost their lives in the context of yesterday’s events,” Dujarric added. “The Secretary-General appeals for violence to be avoided at any cost and for lethal force not to be used in any circumstances.”

Former Chilean President Michelle Bachelet, the U.N.’s high commissioner for human rights, focused her criticism on excessive use of force used by the Venezuelan security forces, as well the involvement of pro-government groups.

She told Fox News on Sunday, “The Venezuelan government must stop its forces from using excessive force against unarmed protesters and ordinary citizens.”

“People have been shot and killed, others have reportedly received wounds from which they will never completely recover, including losing eyes,” added Bachelet.

She called the scenes of violence “disgraceful.”

She said: “The use of proxy forces has a long and sinister history in the region,” and added, “it is very alarming to see them operating openly in this way in Venezuela.” 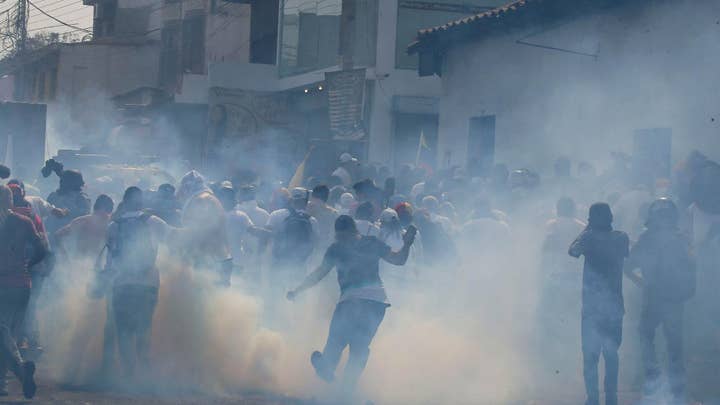 In addition to weakening multilateral pressure against Maduro, analysts said the opposition saber-rattling also risked undermining Guaido’s goal of peeling off support from the military, the country’s crucial power broker.

The 35-year-old Guaido has won the backing of more than 50 governments around the world since declaring himself interim president at a rally in January, arguing that Maduro’s re-election last year was illegitimate because some popular opposition candidates were barred from running.

However, so far he’s been unable to spark a major rift inside the military, despite repeated appeals and the offer of amnesty to those joining the opposition’s fight for power.

More than 100 members of the security forces, most of them lower-rank soldiers, deserted and took refuge in Colombia during Saturday’s unrest, according to migration officials. But none of them was higher ranked than a National Guard major, and there’s been little suggestion any battalion or division commanders are willing to defect despite almost daily calls by Guaido and the U.S.

There’s been no strong indication the U.S. has been planning a military invasion and Trump has made a habit of threatening friends and foes alike — China, North Korea and Canada among them — only to dial back the rhetoric down the road. Washington still has more diplomatic tools available, including extending oil sanctions to punish non-American entities that conduct business with Maduro’s government in much the way such sanctions strangled communist Cuba for decades.