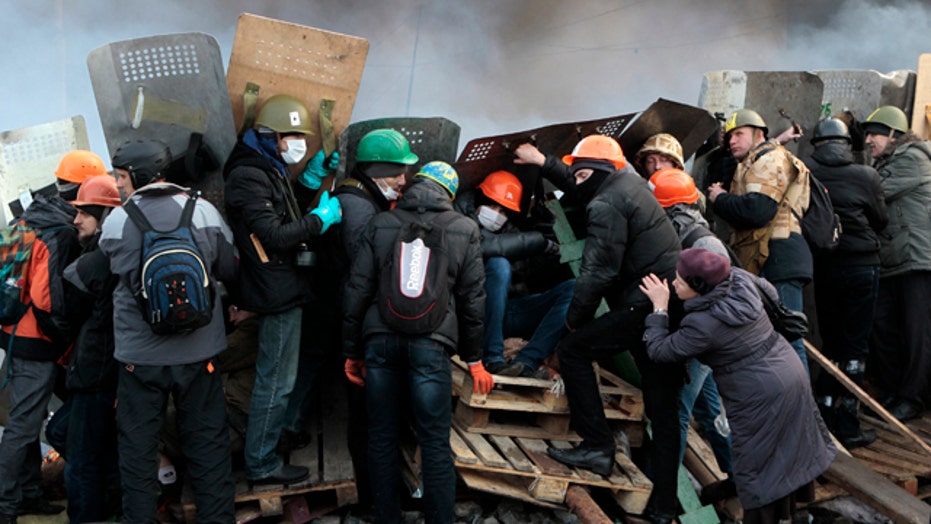 Protesters fight for position against riot police in Kiev

Report from the scene in Ukraine

As fires burned in Kiev during a second night of deadly clashes between Ukraine dissidents and police, President Viktor Yanukovych fired his military chief and the military announced it could take part in a national anti-terrorist operation to restore order.

The move, announced in a decree from Yanukovych, came a day after 26 people were killed and nearly 425 injured in clashes between police and protesters at the sprawling protest camp in central Kiev.

The announcement boded ill for any reconciliation efforts between Yanukovych's government and the protesters who have demanded his resignation for nearly three months. Officials have often referred to the demonstrators as "terrorists."

President Barack Obama said the U.S. condemns the violence in the strongest possible terms, and said the Ukraine military should not step into a situation that should be resolved by civilians, Reuters reported.

The White House, hoping to reduce the escalating tensions, said it would like to see Russia become more involved and support efforts to find a truce between the two sides, the report said.

Russian President Vladimir Putin spoke with Yanukovych overnight, his spokesman said, but added that Putin told him that it’s up to the Ukrainian government to end the bloodshed.

The protests began in late November after Yanukovych froze economical ties with the European Union in exchange for a $15 billion bailout from Russia, but the political maneuvering continued and Moscow later suspended its payments. Both Moscow and the West have been eager to gain influence over this former Soviet republic.

The Kremlin said it put the latest disbursement of its bailout on hold amid uncertainty over Ukraine's future and what it described as a "coup attempt"; it criticized the West for the escalation of violence.

The recent wave of street violence began Tuesday when protesters attacked police lines and set fires outside parliament, accusing Yanukovych of ignoring their demands to enact constitutional reforms that would limit the president's power — a key opposition demand. Parliament, dominated by his supporters, was stalling on taking up a constitutional reform to do so.

On Wednesday morning, the center of Kiev was cordoned off by police, the subway was shut down and most shops on Kiev's main street were closed. But hundreds of Ukrainians still flocked to the opposition camp, some wearing balaclavas and armed with bats, others, in every-day clothes and with make-up on, carrying food to protesters.

A group of young men and women poured petrol into plastic bottles, preparing fire bombs, while a volunteer walked past them distributing ham sandwiches to protesters from a tray. Another group of activists was busy crushing the pavement into pieces and into bags to fortify barricades.

"The revolution turned into a war with the authorities," said Vasyl Oleksenko, 57, a retired geologist from central Ukraine, who said he fled the night's violence fearing for his life, but returned to the square in the morning, feeling ashamed. "We must fight this bloody, criminal leadership; we must fight for our country, our Ukraine."

In the western Ukrainian city of Lviv, where most residents yearn for stronger ties with the EU and have little sympathy for Yanukovych, protesters seized several government buildings Tuesday, including the governor's office, police stations, prosecutors and security agency offices and the tax agency headquarters. They also broke into an Interior Ministry unit and set it on fire. The building was still smoldering Wednesday morning and some protesters were driving around town in police cars they had seized during the night.

Ukraine’s Health Ministry said some of the people who died in the clashes Tuesday suffered gunshot wounds, and Kiev hospitals were struggling to treat hundreds of injured. Activists also set-up a makeshift medical unit inside an landmark Orthodox Church not far from the camp, where volunteer medics were taking care of the wounded. It was the deadliest day yet in the protests.

Opposition leader Vitali Klitschko has urged the protesters to defend the camp.

The government has imposed restrictions for transport moving toward Kiev, apparently to prevent more opposition activists from coming from Western part of the country, and at least one train from Lviv was held outside Kiev. Several highways toward into Kiev were also blocked by police.

The State Department also issued a travel alert for U.S, citizens in Ukraine late Tuesday, saying, "The situation in Ukraine is unpredictable and could change quickly. Further violent clashes between police and protesters in (Kiev) and other cities are possible."

Shortly before midnight, Klitschko headed to Yanukovych's office to try to resolve the crisis. But he returned to the square early Wednesday without reaching any agreement on ending the violence. Klitschko told reporters that he had asked the president to stop the police action to clear the square and prevent further deaths, but Yanukovych's only proposal was that the demonstrators have to go home and stop the protests.

Still, Klitschko urged the protesters and police to stop the escalation of violence. He said opposition leader Arseniy Yatsenyuk was trying to arrange for more negotiations with Yanukovych later Wednesday.

In a statement published online early Wednesday, Yanukovych said that he had already made several attempts to compromise, but that opposition leaders "crossed a line when they called people to arms."

Yanukovych said opposition leaders had to "draw a boundary between themselves and radical forces," or else "acknowledge that they are supporting radicals. Then the conversation ... will already be of a different kind."

Tensions soared after Russia said Monday that it was ready to resume providing the loans that Yanukovych's government needs to keep Ukraine's ailing economy afloat. This raised fears among the opposition that Yanukovych had made a deal with Moscow to stand firm against the protesters and would choose a Russian-leaning loyalist to be his new prime minister.

The European Union has called a meeting of its 28 member countries on Thursday to address Ukraine, and could impose sanctions on the country's government, including travel bans targeting Ukraine’s leadership and the freezing of its assets.

Foreign Minister Laurent Fabius told reporters Wednesday in a joint appearance with U.S. Secretary of State John Kerry that he and his counterparts from Germany and Poland will travel to Ukraine ahead of the meeting to talk with government and opposition figures.

The European Investment Bank also announced Wednesday that it has frozen its activities in Ukraine, which include the extension of a metro train line, modernization of air traffic control facilities and a credit line designed to fund projects, according to Reuters.