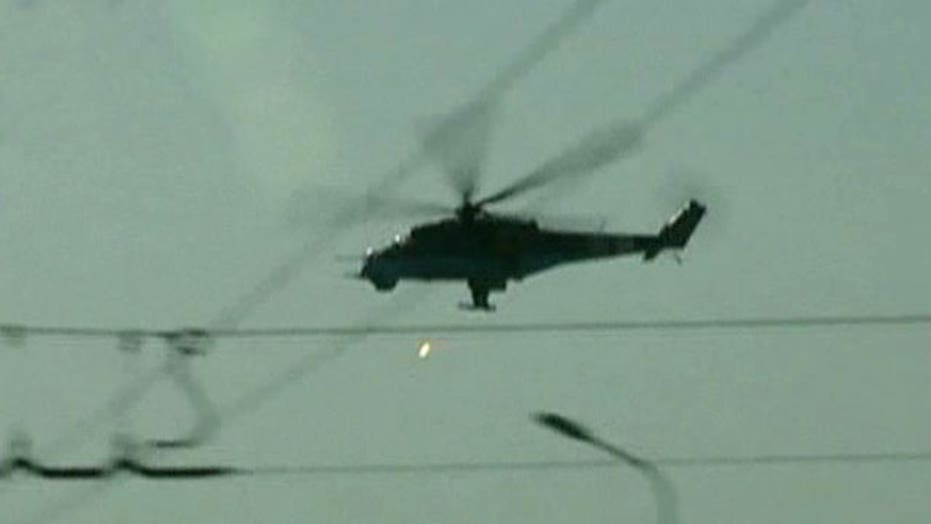 A Ukrainian military general and 14 soldiers were killed when their helicopter was shot down in eastern Ukraine Thursday, the country’s acting president said.

Oleksandr Turchynov said rebels used a portable air defense missile to down the helicopter over the city of Slovyansk.

He told parliament that Gen. Serhiy Kulchytskiy was among those who died, according to the Interfax news agency.

Ukraine's National Guards put the death toll at 12 including the general, but said information about the crash was still being clarified. It said one soldier was badly wounded.

Turchynov said the helicopter was flying troops to a hill outside Slovyansk where Ukrainian forces have set up positions. Interfax said Kulchytskiy had once served in the Soviet army and was in charge of combat training for Ukraine's National Guards.

Sources told Fox News heavy artillery and jet fighters were being used around Slovyansk, which has become the epicenter of fighting between pro-Russia insurgents and government forces in recent weeks. The city -- located 100 miles west of the Russian border -- has seen constant clashes and its residential areas have regularly come under mortar shelling from government forces, prompting some residents to flee.

Meanwhile in Donetsk, a Russian-dominated armed faction of the separatists, the Vostock Battalion, has taken over the main rebel building in the city, according to a Fox News reporter there.

The faction was seen clearing away barricades around the building, installing and anti-aircraft gun and positioning their well-armed fighters, many of whom come from Russia including Chechnya.

The Kiev government condemns the insurgency roiling the east as the work of "terrorists" bent on destroying the country and blames Russia for fomenting it. Russia denies the accusations, saying it has no influence over rebels, who insist they are only protecting the interests of the Russian-speaking population of the east.

An insurgent leader in eastern Ukraine also said Thursday that his fighters are holding four observers from the Organization for Security and Cooperation in Europe and promised that they would be released imminently.

Vyacheslav Ponomarev, the self-proclaimed "people's mayor" of Slovyansk, a city in the Donetsk region, told The Associated Press the monitors -- who are from Turkey, Switzerland, Estoniaáand Denmark -- were safe.

"I addressed the OSCE mission to warn them that their people should not over the coming week travel in areas under our control. And they decided to show up anyway," Ponomarev said.

"We will deal with this and then release them," he said, without setting any specific timeframe.

The OSCE said it had lost contact with one of its four-man monitoring teams in Donetsk on Monday evening. Rebels have previously kidnapped military observers working under the auspices of the OSCE.

Poroshenko has promised to negotiate with people in the east, where insurgents have seized government buildings and fought government troops for more than a month. But he also vowed to continue a military operation to uproot the armed rebels and bring it to a quick end.

In the most ferocious battle yet, rebels in Donetsk tried to take control of its airport Monday but were repelled by Ukrainian forces using combat jets and helicopter gunships. Dozens of men were killed and some morgues were overflowing Tuesday. Some insurgent leaders said up to 100 fighters may have been killed. Fox News has been told that the bodies of 33 rebel fighters were scheduled leave a local morgue to be repatriated to Russia on Thursday.

Helicopters, armored vehicles and combat ready troops were moving toward Donetsk in the event the Kiev government makes good on its threat to enter the city.

The rebels have declared the Donetsk and Luhansk regions independent of Ukraine. They have pleaded to join Russia, but President Vladimir Putin has ignored their appeal in an apparent bid to de-escalate tensions with the West and avoid a new round of Western sanctions.

Putin has supported an OSCE peace plan that calls for ending hostilities and launching a political dialogue. Russia said it would be ready to work with new leader Poroshenko, but strongly urged the Ukrainian government to end its military operation in the east.

Chechens are also fighting alongside the pro-Russia rebels in eastern Ukraine, according to a self-appointed mayor of a militant stronghold in the region who spoke to Fox News on Wednesday.

Chechnya's Moscow-backed leader, Ramzan Kadyrov, on Wednesday rejected allegations he had ordered his paramilitary forces to Ukraine, but said he can't stop fellow Chechens acting on their own from joining the fight.

Fox News' Greg Palkot and the Associated Press contributed to this report.