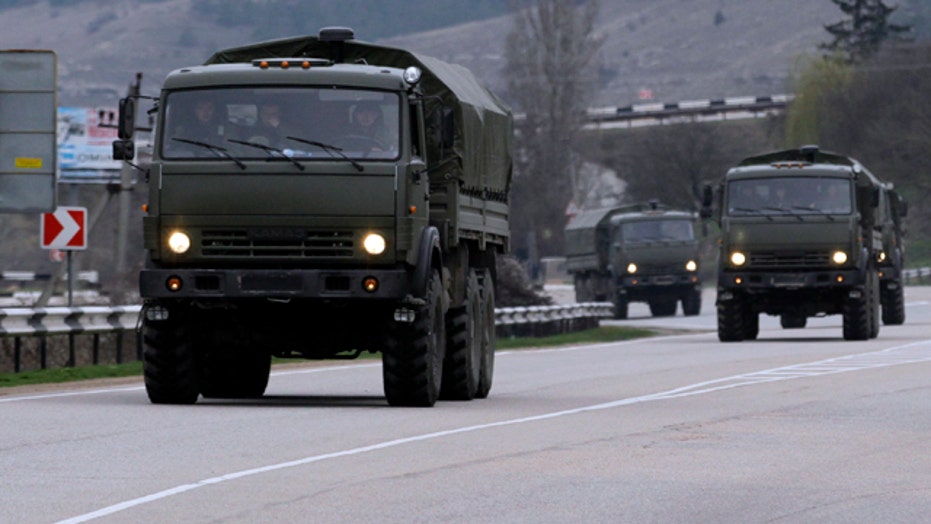 US urges Russia to pull back forces in Ukraine

Western leaders on Sunday scrambled to defuse the crisis in Ukraine, as the nation's new government placed its military on "high alert" after more than 6,000 Russian forces poured into the Crimean Peninsula.

The response was seen in phone calls between world leaders, statements of protest and threats of diplomatic and economic pressure against Russia.

The Group of Seven nations  -- including the United States, Canada, France, Germany, Italy, Japan and Britain -- said Sunday night that they're suspending participation in the upcoming economic summit scheduled to be held in Sochi, the recent site of the Winter Olympics, in protest of Russia's actions.

"We call on Russia to address any ongoing security or human rights concerns that it has with Ukraine through direct negotiations, and/or via international observation or mediation under the auspices of the UN or the Organization for Security and Cooperation in Europe," the G-7 said in a statement released by the White House.

The leaders pledged to work together on a package of financial assistance to Ukraine, which is nearly bankrupt.

Also on Sunday, Secretary of State John Kerry said he would be visiting Kiev on Tuesday in a show of support for the nation's new government, as he blasted Russia's actions as part of "a stunning, willful" choice to invade another country.

In a conference call with reporters, senior Obama administration officials said military options were off the table but ways to exert diplomatic and economic pressure on Russia were being considered.

The officials said that more than 6,000 Russian military members had been detected, along with "considerable" materiel.

"(The Ukraine incursion) is a show of weakness," a senior administration official said. "They have lost the government they backed in Kiev, now they're resorting to the type of intervention that will severely distance them from the international community."

Meanwhile, NATO Secretary General Anders Fogh Rasmussen said at a press conference that Russia should pull back its forces and refrain from interfering elsewhere in Ukraine, according to Reuters. NATO is urging the two countries to seek a peaceful resolution through dialogue.

Ukraine is not a NATO member, which means the United States and Europe are not obligated to come to its defense. But Ukraine has taken part in some alliance military exercises and contributed troops to its response force.

So far, however, Ukraine's new government and the West have been powerless to counter Russia's tactics. Armed men in uniforms without insignia have moved freely about Crimea for days, occupying airports, smashing equipment at an air base and besieging a Ukrainian infantry base.

Russian President Vladimir Putin has defied calls from the West to pull back his troops, insisting that Russia has a right to protect its interests and those of Russian-speakers in Crimea and elsewhere in Ukraine. His confidence is matched by the knowledge that Ukraine's 46 million people have divided loyalties. While much of western Ukraine wants closer ties with the 28-nation European Union, its eastern and southern regions like Crimea look to Russia for support.

Russia has long wanted to reclaim the lush Crimean Peninsula, part of its territory until 1954. Russia's Black Sea Fleet pays Ukraine millions every year to be stationed at the Crimean port of Sevastopol and nearly 60 percent of Crimea's residents identify themselves as Russian.

During a phone conversation Sunday with Merkel, Putin "directed her attention to the unrelenting threat of violence from ultranationalist forces (in Ukraine) that endangered the life and legal interests of Russian citizens," according to a Kremlin statement.

"The measures taken by Russia are fully adequate with regard to the current extraordinary situation," it said.

Russia's state-controlled media has played almost nonstop footage of the Ukrainian crisis, highlighting what it says are ultranationalist attacks on Russians and pro-Russian Ukrainians by activists from Kiev or regions further west. However, AP reporters in Ukraine witnessed no acts of violence directed at Russians or Russian sympathizers in Crimea.

Ukraine's new government came to power last week following months of pro-democracy protests against the country's pro-Russian president, Viktor Yanukovych, and his decision to turn Ukraine toward Russia instead of the EU. Yanukovych fled to Russia after more than 80 people were killed in the protests, but insists he's still president.

Ukraine's acting president, Oleksandr Turchynov, put Ukraine's armed forces on alert Sunday, calling up reserves for training and stepping up security at nuclear power plants, airports and other strategic locations. However, no overt military actions by Ukraine were seen.

Turchynov also moved to consolidate the new government's authority in eastern Ukraine, appointing 18 new regional governors and enlisting the support of the country's wealthy businessmen, known as oligarchs. The new appointees included two oligarchs in the eastern cities of Dneprotrovsk and Donetsk, as big business and the Ukrainian government united against Russia.

Ukraine's richest man, Rinat Akhmetov, urged business, ordinary people and the government to join together, saying Sunday that the use of force and "illegal action from outside" were "impermissible."

"I call upon all my fellow citizens to unity for the sake of a whole and undivided Ukraine ... Our strength is in the solidarity of business, government and society," said Akhmetov, whose SCM Group has 300,000 employees and interests in steel, coal and mining.

WATCH: Is it too late to warn Russia to stay out of Ukraine?

Faced with the threat from Russia, "the national elite has consolidated around the new government," political analyst Vadim Karasyov of the Institute for Global Strategies told The Associated Press. "This is a very good sign for the new government."

Russian troops, meanwhile, pulled up to the Ukrainian military base at Perevalne on the Crimean Peninsula in a convoy Sunday that included at least 13 trucks and four armored vehicles with mounted machine guns. The trucks carried 30 soldiers each and had Russian license plates, and the Ukrainian colonel in charge of the base, Sergei Storozhenko, told the Wall Street Journal that the troops are Russian.

In response, a dozen Ukrainian soldiers, some with clips in their rifles, placed a tank at the base's gate, leaving the two sides in a tense standoff. It appeared to be the first known case of outmatched Ukrainians standing up to Russian military might.

Unidentified soldiers were also seen cutting power to the headquarters of the Ukrainian naval forces in Crimea — whose commander defected later Sunday and pledged his allegiance to "the people of Crimea."

In Kiev, a Ukrainian security official said the head of the Ukrainian navy — Adm. Denis Berezovsky — had been dismissed and faces a treason investigation after declaring his allegiance to the pro-Russian government in Crimea and offering no resistance to the Russian troops.

The speaker of Crimea's legislature, Vladimir Konstantinov, was quoted as saying local authorities do not recognize the new government in Kiev. He said a planned referendum on March 30 would ask voters about the region's future status.

A convoy of hundreds of Russian troops was also seen heading toward Simferopol, the regional capital of Crimea. Armed men in military uniforms without markings strolled around Simferopol's central plaza, Lenin Square, outside its Council of Ministers building.

"It is very important that we all do everything we can to calm tensions," said British Foreign Minister William Hague, who flew to Kiev on Sunday.

He said he has urged Russian officials to "speak directly to the Ukrainians" but so far they had not.

In Kiev, Moscow and other cities, thousands of protesters took to the streets to either decry the Russian occupation or celebrate Crimea's return to its former ruler. Ukraine’s government has accused Russia of sending over hundreds of its citizens across the border to stage the protests so it can justify an invasion, Reuters reports.

"Support us, America!" a group of protesters chanted outside the U.S. Embassy in Kiev. One young girl held up a placard reading: "No Russian aggression!"

"Russia! Russia!" the crowd chanted in Moscow, where at least 10,000 people bearing Russian flags marched freely through the city Sunday, while a few dozen demonstrating on Red Square against the invasion of Ukraine were quickly detained by Russian riot police.

"We understand that the West wants to attack us and seize this territory. The West "is dangerous to us," said Victor Sidelin, a Moscow resident at the march.