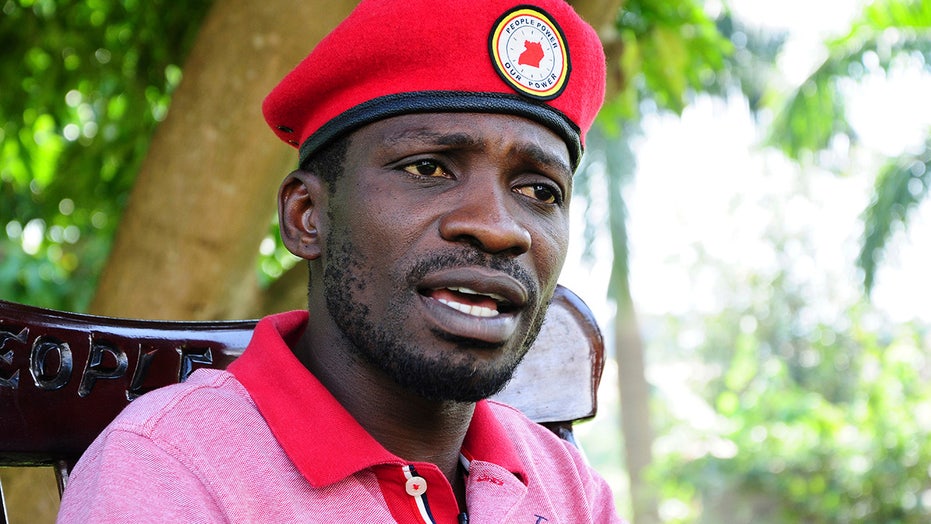 Ugandan musician turned Member of Parliament and political opposition leader Bobi Wine has been charged with "annoying" the African country's president, Yoweri Museveni, according to his lawyer.

The "annoy" charge stems from an August 2018 incident where Wine and other opposition leaders allegedly stoned the president's convoy, Wine's lawyer, Asuman Basalirwa, told the AFP on Wednesday.

Wine had been charged with treason following the incident, and he also faces charges of inciting violence and encouraging people to harm the president.

FILE- In this file photo of Monday July 15, 2019, pop star-turned-opposition lawmaker Bobi Wine, whose real name is Kyagulanyi Ssentamu, is seen while giving an interview to Associated Press at his home, Magere in Kampala, Uganda. (AP Photo/Ronald Kabuubi-File)

SUSPECTS ARRESTED IN KIDNAPPING OF AMERICAN TOURIST AND GUIDE IN UGANDA

The BBC reported Wednesday that Wine, whose real name is Robert Kyagulanyi, is newly charged with intending to "alarm, annoy or ridicule" Museveni.

"This government of President Museveni is in panic mode. At first, it was treason and now it is annoying President Museveni. Who on earth can't be annoyed? It is a ridiculous charge and [I] am ready to challenge it in court," Wine told the AFP this week.

Wine is currently out on bail. He could face life in prison if convicted of all the charges against him.

Wine, 37, took up politics in 2017 and has recently announced he will run against Museveni in the country's 2021 presidential elections. He has more than 1 million followers on Facebook and 341,000 on Twitter and is leading what he calls the "People Power Movement," whose agenda is to end oppression and corruption in the country.

Republic of Uganda President Yoweri Museveni speaks during an interview, Tuesday, May 5, 2015, at the Waldorf Astoria in New York. Supporters believe that Museveni, who is one of the longest serving leaders on the African continent, will win another term should he decide to seek one in 2016. (AP Photo/Bebeto Matthews) (The Associated Press)

He and 35 others are charged with treason, and the charge sheet states they "wrongfully restrained" Museveni by "refusing to give him right of way" in 2018, according to the BBC.

AT LEAST 5 DEAD, OTHERS MISSING AFTER MUDSLIDES IN UGANDA

The new charge comes after a prominent Ugandan activist, Stella Nyanzi, was recently sentenced to 18 months in prison for posting a poem that criticized Museveni on Facebook. She had been found guilty of cyber harassment.

Wine took to Facebook to speak out about the sentencing, saying, "The Magistrate also found it convenient to condemn Dr. Stella Nyanzi for using immoral words! The same courts which have protected the corrupt, shielded murderers and defended land grabbers are now castigating a poet for being immoral."

Museveni, 74, has been president of Uganda for more than three decades, since 1986, and will be seeking a sixth term in 2021. He accuses Wine and other opposition figures of trying to lure young people into deadly rioting.