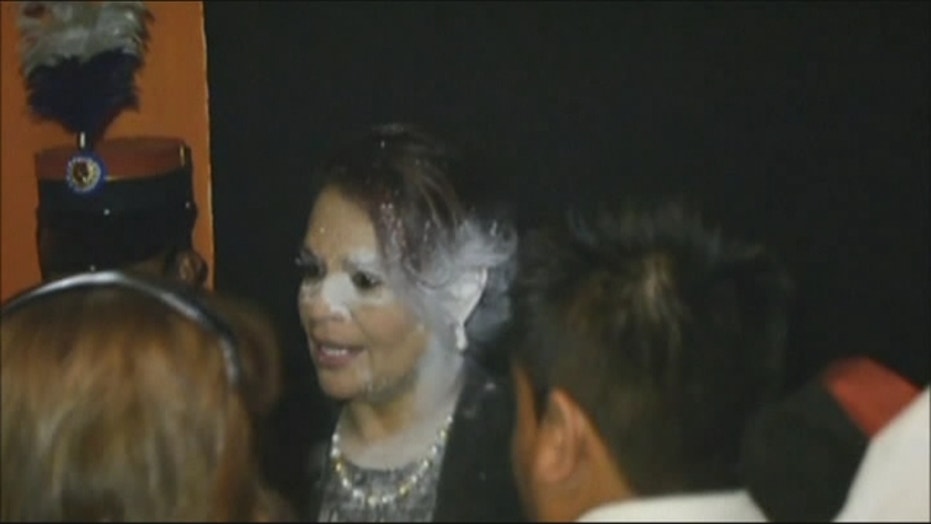 Guatemalan Vice President Roxana Baldetti rushed to hospital after protester throws bag of flour at her.

GUATEMALA CITY (AP) – Guatemalan authorities have detained four people after two women who threw flour on Vice President Roxana Baldetti's face at the end of the president's state of the nation speech.

Baldetti was about to leave the Teatro National on Tuesday when the women approached and attacked her. The vice president was taken out on a stretcher and driven to a hospital by ambulance after she said she was having difficulty breathing.

The detainees are Yeraldin Yvett Del Cid and Dayra Crystal Cotton, who threw the flour at Baldetti and José Miguel Hernández Andrés and Aníbal Fernando Rodríguez Aquino, who were arrested in a waiting vehicle ready to flee after the attack.

"I have the right to express myself freely," said one of the women to reporters minutes before being arrested.

In his speech to members of Congress, President Otto Perez Molina talked about advances made in the issues of public safety and children malnutrition. He also stressed the need to overcome the insecurity in the country.

"Our nation is on its way to being a safer nation because we work with a clear strategy that is working for a nonviolent Guatemala," Perez said. He said that in the second year of his administration, the homicide rate fell from 39 to 34 per 100,000, and 119 bands responsible of robberies and murders across the country have been dismantled.

According to the United Nations, Guatemala is one of the three most violent countries in Latin America, with a rate of 14 homicides per day.