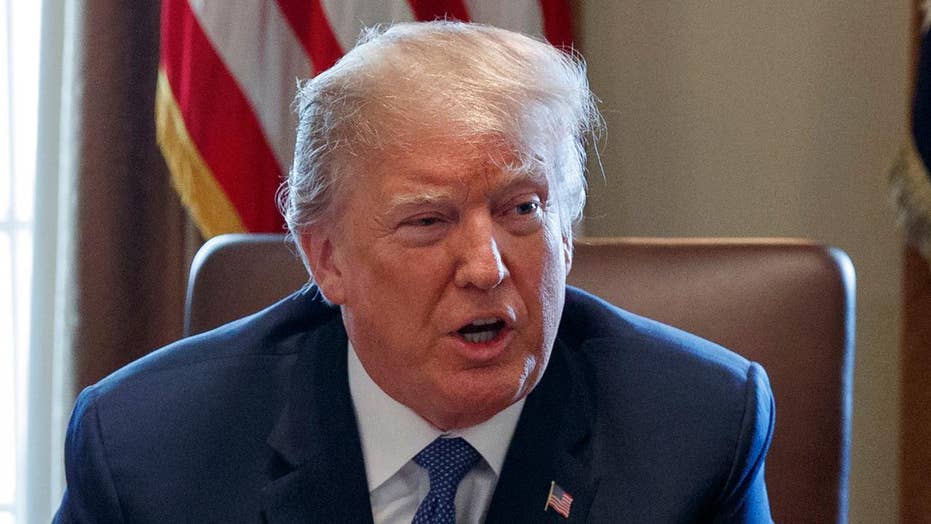 President Trump: Attack in Syria will be met forcefully

Trump meets with military leaders, says decision on U.S. retaliation against suspected chemical attack in Syria will be coming tonight or shortly thereafter.

After another suspected chemical attack in Syria, President Trump promised the U.S. would respond “forcefully” but so far has not given specifics.

“We're making a decision as to what we do with respect to the horrible attack that was made near Damascus, and it will be met and it will be met forcefully,” Trump said as he met with top military leaders at the White House, adding that “we have a lot of options militarily.”

He later warned that missiles "will be coming" at Syria, cautioning the Kremlin on social media against shooting them down. But he also added to speculation about an attack and its timing in a tweet, saying, "Never said when an attack on Syria would take place. Could be very soon or not so soon at all!"

The president canceled a planned trip to South America this week, instead choosing to stay in the U.S. to “oversee the American response to Syria and to monitor developments around the world,” according to press secretary Sarah Sanders.

The government of Syrian President Bashar Assad has denied responsibility for the alleged attack.

Here’s a look at some options Trump has in responding to the reported attack – and what experts say are the consequences of those actions.

Trump ordered airstrikes in Syria in 2017 to “prevent and deter the spread and use of deadly chemical weapons,” the president said at the time.

Luke Coffey, director of the Allison Center for Foreign Policy at the conservative Heritage Foundation, said a “quick response that’s very punitive in nature” is the best route for the Trump administration to take after the latest purported chemical attack – opposed to working for a regime change.

“There’s no doubt that we have very smart people with high tech equipment who can figure out how the attack was carried out and who was in charge,” Coffey told Fox News. “There’s a whole chain that they could construct for targeting, and I think that needs to be done.”

But Trevor Thrall, a senior fellow at the more libertarian-leaning Cato Institute’s Defense and Foreign Policy Department, said “there aren’t any good options” when it comes to responding to Syria, calling the use of chemical weapons a “distraction.”

“Trump already sent bombs away for this once before,” Thrall, also an associate professor at George Mason University’s Schar School of Policy and Government, told Fox News. “A few cruise missiles isn’t going to do anything to change the course of the war in Syria or stop Assad.”

“The problem Trump has, now that he’s punished Assad once for this, I think he might feel like he has to do something again to save face,” Thrall continued, adding that he expects the administration to use "harsh, but not too serious of airstrikes again.”

The problem with airstrikes, according to Thrall, include the possibility of accidentally causing causalities among innocent civilians and creating a future problem for the U.S.

Another issue is the congressional authorization of strikes, according to to Hina Shamsi, the director of the American Civil Liberties Union’s National Security Project, who harshly criticized the Trump administration for lacking congressional approval in the 2017 air strikes.

“No one disputes that Bashar al-Assad’s use of chemical weapons on Syrian civilians is illegal, immoral, and unacceptable,” Shamsi wrote. “But Assad’s illegality does not excuse illegality in response.”

A U.S. official told The Associated Press that the U.S. was discussing whether they would participate in a retaliatory strike. If Trump decides to proceed quickly, the most likely partner would be France, rather than Britain, because of concerns about obtaining permission from Parliament, said the official.

“It can’t be the U.S. alone firing off 50 cruise missiles,” Coffey said. “Other countries who have similar capabilities should also participate.”

He also added that a Middle Eastern country – such as Qatar, Saudi Arabia or the United Arab Emirates – could also join the coalition.

“I think it would be worth the diplomatic legwork that it would require. It would send a very strong message if Arab countries participated,” Coffey said.

When it comes to airstrikes, Thrall questioned why it’s the sole responsibility of the U.S. to retaliate to the suspected use of chemical weapons in Syria.

“Why is it magically, uniquely [the United States’ job]? We don’t live next to Syria, we didn’t start the war, we are not Assad’s keeper,” he said. “Why, without any vote at the United Nations Security Council or without deliberation with allies, why should we take it on ourselves?”

The U.S. had called on the Security Council to vote on a resolution that would condemn the continuing use of chemical weapons in Syria “in the strongest terms” and establish a new body to determine responsibility for the chemical attacks.

Trump also said Monday that everybody involved in the alleged attack "is going to pay a price," including Russian President Vladimir Putin.

“If it’s Russia, if it’s Syria, if it’s Iran, if it’s all of them together, we’ll figure it, out and we’ll know the answers quite soon,” Trump told reporters ahead of a Cabinet meeting.

Rep. Michael McCaul, chair of the House Homeland Security Committee, said Iran and Russia “must not be left off the hook” as both nations “have blood on their hands as they have been partners in carrying out these atrocities” in Syria.

“Both countries need to be subject to additional economic and diplomatic penalties for propping up Assad, sponsoring terror, and supporting other destabilizing actions in the Middle East,” McCaul, a Republican, wrote in an opinion column for Fox News.

Coffey said the U.S. could target “Iranian enablers of Assad” but doubted that Russia would be a target.

“I don’t think the U.S. wants to go to World War III over Syria,” he said.

Thrall, too, expressed concern about the U.S. possibly going after other nations.

“My deep concern is every time you do something that you think is limited inside a conflict zone like Syria, you end up getting more deeply engaged,” he warned.