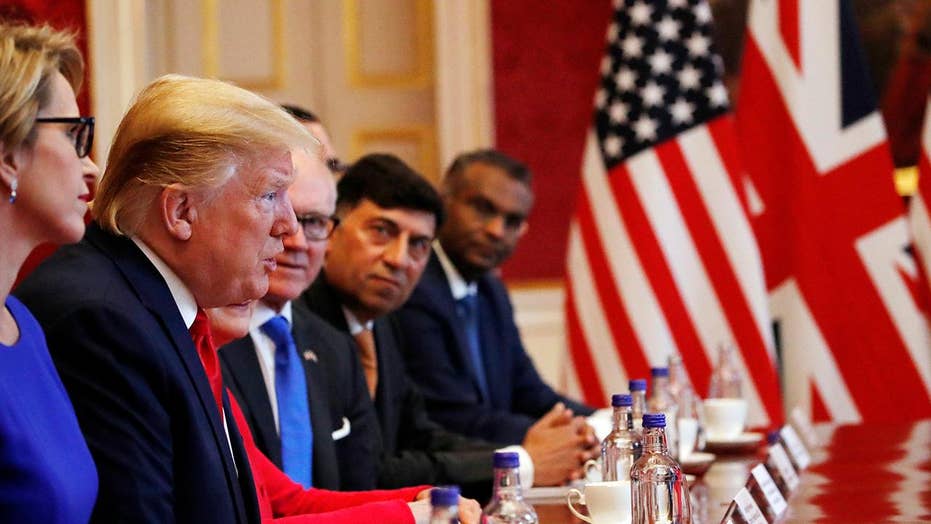 With political tensions high, why is the US-Britain alliance more important now than ever?

A woman popped the massive balloon depicting President Trump as a baby in London on Tuesday, berating protesters for disrespecting the "best president ever."

"That's a disgrace," she told bystanders in a video posted by The Sun newspaper. "The president of the United States is the best president ever." It's unclear what she used to deflate the balloon but she prompted people to yell in response.

"I think Donald Trump's balloon is not very well," she said as she walked away from the scene. "He's going down rapidly for a reason." During the video, an officer appeared to confront her, prompting her to delcare "the police are coming after me."

She also seemed to claim that her bloody hand, apparently a result of her attempt to burst the baby balloon, came from a biking accident. The video ended with the woman yelling and accusing the officers of injuring her.

The balloon became a symbol of London protesters' disdain for the president as he visited British leaders on Tuesday. The group that carried the balloon reportedly attributed the woman's actions to her "far right" inclinations.

“A woman … punctured the mini Trump baby replica with a sharp object,” a group spokesman said, according to The Independent. “It’s not surprising that the far right would want to meet freedom of expression with violence.”

The incident was just the latest indication that tensions were rising to a potentially dangerous level in the British capital. In an attempt to maintain their safety, police reportedly barricaded 20 Trump supporters in a pub amid protests.

One Trump supporter was shouted down as "Nazi scum" and had a milkshake thrown on him.