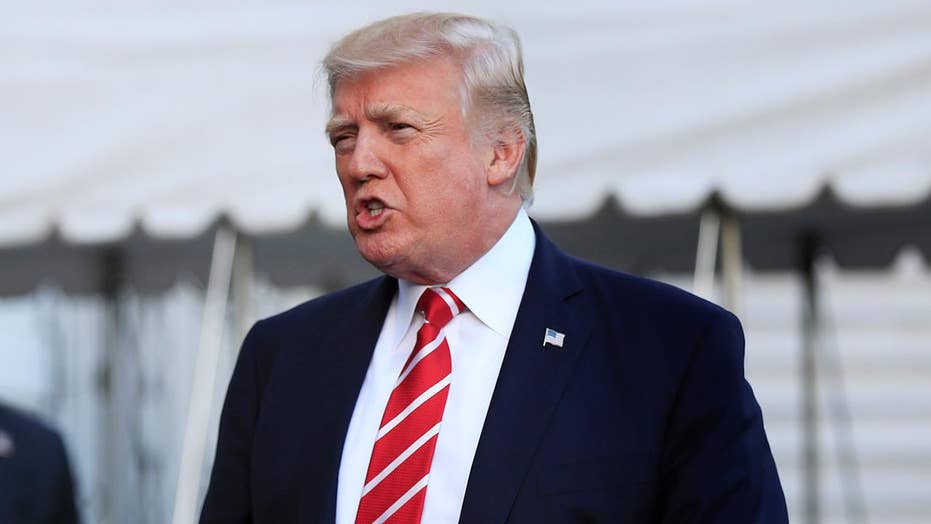 President Trump took aim at the hard-line regime in Iran Monday, tweeting it is "time for a change" and blasting the Obama administration's controversial nuclear deal as the death toll from protests around the Islamic republic rose to 12.

Trump – who has clashed with Irannian President Hassan Rouhani in recent days as the protests have continued – opened 2018 with a Twitter broadside at Tehran's authoritarian mullahs. Iran “is failing at every level despite” the controversial nuclear deal the Obama administration made with Iran in 2015, Trump tweeted.

“The great Iranian people have been repressed for many years. They are hungry tor food [and] for freedom. Along with human rights, the wealth of Iran is being looted,” Trump said. “TIME FOR CHANGE!”

The deal Trump referenced included the Obama administration's unfreezing of more than $100 billion in Iranian assets and cash payments of more than $1 billion for Iran's pledge not to pursue nuclear weapons for at least 10 years.

On the streets of Iran, thousands have called for the theocratic regime to end, in a reprise of the so-called "Green Movement" of 2009, when protesters clashed over elections and called fruitlessly on the U.S. to support their cause. That protest movement ended with the arrest of hundreds of students, political figures and dissidents.

Benjamin Netanyahu, the prime minister of Israel, said Monday he wishes the Iranian people “success in their noble quest for freedom.”

Without elaborating, state TV reported that 10 people were killed during clashes Sunday night. Two other demonstrators were killed in a protest in western Iran late Saturday, according to the Associated Press.

"Some armed protesters tried to take over some police stations and military bases but faced serious resistance from security forces," state TV reported.

Earlier Monday, the semi-official ILNA news agency quoted Hedayatollah Khademi, a representative for the town of Izeh, as saying two people died there Sunday night. It was not clear if they were included in the state TV toll. Izeh is about 500 miles south of Tehran.

Analysts have suggested that the widespread protests have begun as a way to challenge Iranian President Hassan Rouhani.

Demonstrators have focused on Iran’s economy as the country faces inflation and high unemployment.

Iran has blocked access to Instagram as well as Telegram, a popular messaging app used by activists to organize demonstrations.

The recent protests are the largest show of dissent since the Green Movement rallies of 2009, the BBC reported. Then, millions of demonstrators rallied in opposition of the controversial election of then-President Mahmoud Ahmadinejad.