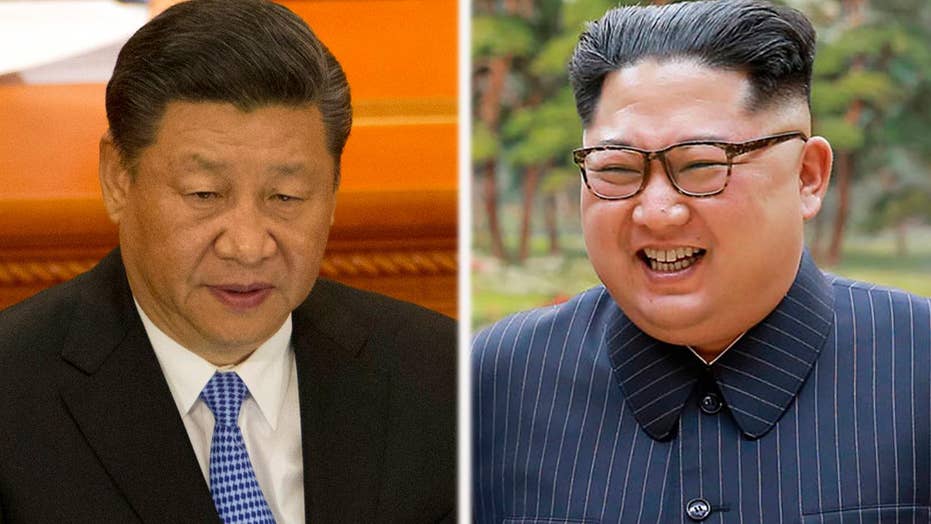 As Chinese President Xi greeted a visiting North Korean delegation, the North Korean ally urged Pyongyang not to give up on the talks; senior foreign affairs correspondent Greg Palkot reports from London.

SEOUL, South Korea – After a few months of rapprochement, North Korea abruptly called off scheduled high-level talks with South Korea on Wednesday and warned the U.S. that a planned summit with President Donald Trump could be at risk. A look at developments on the Korean peninsula:

Jan. 9: North and South Korean officials, meeting in the border village of Panmunjom, agree on North Korea sending athletes and delegates to the Winter Olympics taking place in the South the following month.

Feb 9: The North and South Korean Olympic teams march together in the opening ceremony for the Winter Games. Kim's sister, Kim Yo Jong, attends, making her the first member of her family to visit South Korea since the 1950-53 Korean War.

March 7: A top South Korean official visits Pyongyang and says Kim is willing to discuss the fate of his nuclear arsenal with the United States and expressed a readiness to suspend nuclear and missile tests during such talks.

March 9: Trump accepts Kim's invitation to meet, which the White House initially says will take place by the end of May.

March 27: Kim makes a surprise visit to Beijing and meets Chinese President Xi Jinping in an apparent move to strengthen his leverage ahead of negotiations with Trump.

April 18: Trump confirms that Mike Pompeo, then the CIA chief, had met secretly with Kim in North Korea and said "a good relationship was formed" heading into the adversaries' anticipated summit.

April 21: North Korea says it has suspended nuclear and long-range missile tests and plans to close its nuclear test site as part of a shift in its national focus to improving the economy. Trump tweeted, "This is very good news for North Korea and the World" and "big progress!"

April 27: Kim crosses onto the South Korean side of the Panmunjom border village for a day-long summit with South Korean President Moon Jae-in.

May 7: Kim makes another surprise visit to meet Xi in the Chinese coastal city of Dalian. He calls for stronger "strategic cooperation" between the longtime allies amid shifts in the region's political environment.

May 9: Pompeo, now U.S. secretary of state, makes an unannounced one-day trip to Pyongyang to prepare for the planned Trump-Kim summit. North Korea releases three Americans who had been imprisoned, and they return with Pompeo to the U.S.

May 10: Trump announces he will meet with Kim in Singapore on June 12. He tweets: "We will both try to make it a very special moment for World Peace!"

May 12: North Korea says it will hold a ceremony to dismantle its nuclear test site between May 23 and 25 and foreign journalists will be invited to attend.

May 16: North Korea protests an ongoing U.S.-South Korea military drill and says in a pre-dawn dispatch that it is suspending high-level talks with the South that were to be held the same day. It adds that "the U.S. will have to think twice about the fate" of the Trump-Kim summit.