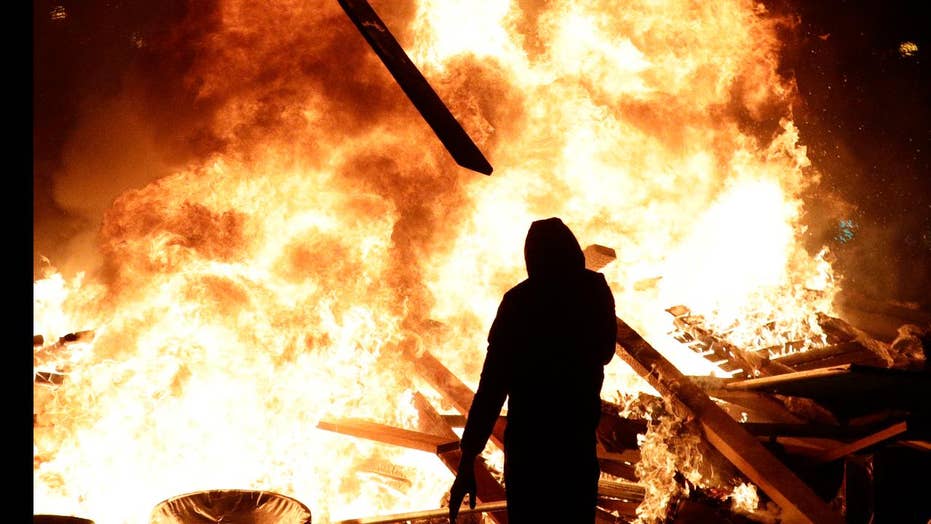 Police and protesters clash in Paris over gas prices

The angry clashes, both in Paris and other towns and cities across the country, mark the eighth day of “yellow jacket” protests against the tax, but have also come to encompass a growing anger against Macron and the French ruling class -- seen by many as out of touch.

The yellow jackets have become a uniform of sorts for the protesters, originating from the neon yellow jackets French drivers are required to keep in their vehicles.

Authorities said that at least 8,000 protesters flooded the Champs-Elysees in Paris alone, with 81,000 protesters in total nationwide compared to 244,000 last Saturday. Police deployed some 3,000 security forces after an attempt to march on the Elysee Palace last week.

Police used smoke, tear gas and even a water cannon to try and disperse the protesters, Le Monde reported.

Officials said that a no-go zone, set up around key areas including the presidential palace and the National Assembly on the Left Bank of the Seine River, has not been breached.

At least eight people, including two police officers, were injured, while dozens of protesters were detained, including for throwing projectiles.

In La Madeleine, an area filled with luxury brand shops popular with tourists, businesses shut down due to the protests. 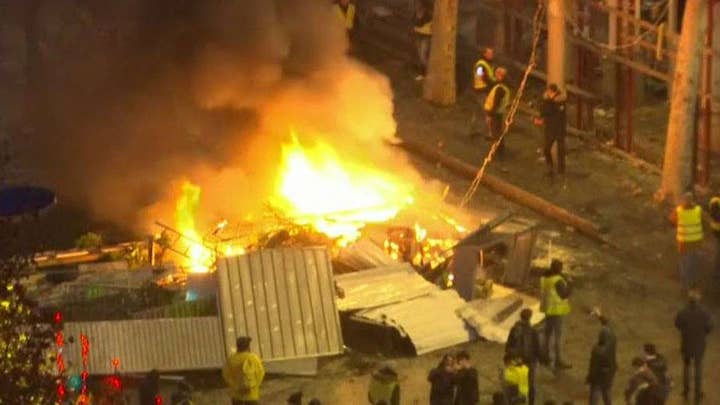 Demonstrators created a fire barricade and began chanting “Macron resign!” when tear gas was launched at them, sparking a brief dash. Thick black smoke was billowing into the sky and the area was completely shut down

French police appeared have created a barricade in the area to prevent the protesters from joining the rest of the group at the Elysee Palace. Sky News reported that other protesters sang the national anthem, called Macron a thief and demanded his resignation.

In other cities, such as Lyon and Marseille, protests were more peaceful.

The diesel fuel tax has gone up seven euro cents (nearly eight U.S. cents) and will keep climbing in coming years, according to Transport Minister Elisabeth Borne. The tax on gasoline is set to increase by four euro cents. Gasoline currently costs about 1.64 euros a liter in Paris ($7.06 a gallon), slightly more than diesel.

A demonstrator holds a flare on a barricade on the Champs-Elysees avenue during a demonstration against the rising of the fuel taxes, Saturday, Nov. 24, 2018 in Paris. (AP)

Macron, however, has said that gas tax increases are necessary to reduce France’s dependence on fossil fuels and fund renewable energy investments.

The protests are the latest blow for Macron, who has been dogged by sinking internal poll ratings for months, dropping into the 20s as he has struggled to shed the perception that he is an out-of-touch elitist,

Responding to those concerns, Macron has noted that he does not face any midterm elections and told Bloomberg News in October he intends to keep “exactly the same pace” with his reforms