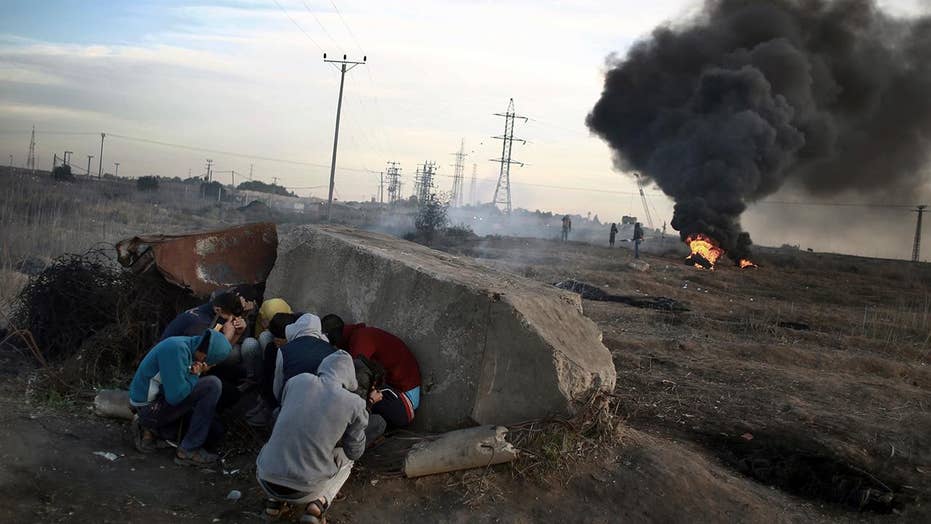 Rockets fired into Israel from Gaza as violence continues

David Lee Miller reports on the latest tensions over Jerusalem.

JERUSALEM – The Latest on the Israeli-Palestinian conflict and the fallout from the U.S. recognition of Jerusalem as the capital of Israel (all times local):

Egypt's defense minister says chances for a Mideast peace deal have been diminished after the U.S. government's decision to move its embassy to Jerusalem.

Sedki Sobhi said talks with his Cypriot counterpart Christoforos Fokaides Tuesday focused on ways in which the two countries can step up cooperation to deal with common challenges including terrorism and illegal migration.

Sobhi said "the chances to settle the Palestinian issue have declined, particularly after the U.S. decision to move the American embassy in Israel to Jerusalem."

Fokaides said Egypt is a key country for regional stability and that Cyprus is urging is fellow European Union member states to give the country "greater, more substantial and tangible" support.

He said joint training and military drills are planned for next year.

The Palestinian Islamic Jihad militant group says two of its members have been killed in an explosion in the Gaza Strip.

The cause of the blast was not immediately clear.

Islamic Jihad claimed the men were killed by an Israeli airstrike while riding on a motorcycle. But Israel said it was not responsible.

Earlier Tuesday, four Palestinians were wounded, one seriously, by Israeli gunfire as they protested near the Israeli border fence in eastern Gaza City.

In addition to border protests, Palestinian militants have fired several rockets at Israel in recent days, sparking Israeli retaliatory airstrikes and shelling. Two Hamas militants and two demonstrators were killed over the weekend.

The poll found that 91 percent consider Trump's declaration last week a threat to Palestinian interests. Forty-five percent believe the Palestinians should cut all contacts with the U.S., submit a complaint to the International Criminal Court and launch an armed uprising.

While Trump said his declaration does not prejudge future talks on the status of Jerusalem, 72 percent of respondents believe his administration will not submit any peace plan. It also found widespread distrust of the Palestinians' Arab allies.

The poll, conducted by the respected Palestinian Center for Policy and Survey Research, questioned 1,270 adults and had a margin of error of 3 percentage points.