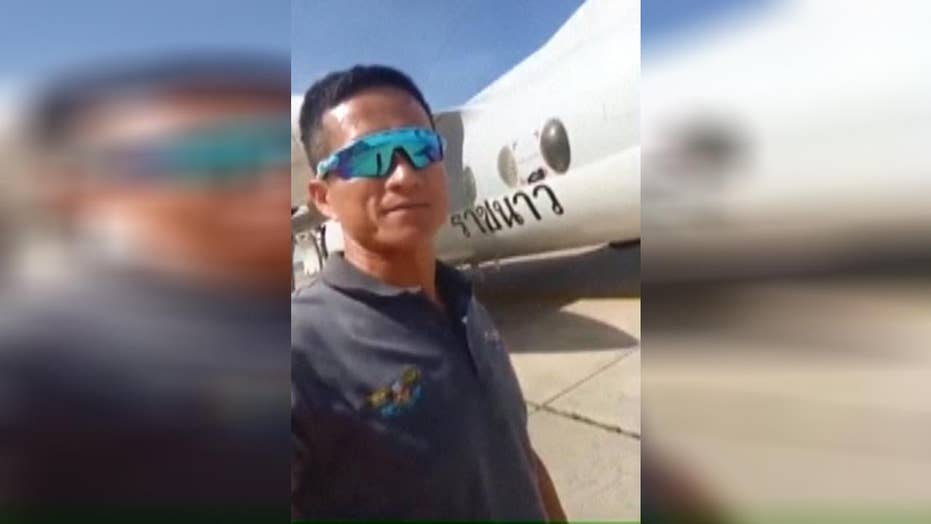 The Thai soldiers of the Underwater Demolition Assault Unit, who are currently trying to rescue a dozen boys and their soccer coach trapped in a flooded cave, are a roving band of fighters responsible for hunting drug smugglers and providing armed escorts -- when they aren’t busy saving lives.

The group, also referred to as Thailand’s Navy SEALs, are at the center of the rescue operation following the discovery of the youth soccer team and their coach earlier this week in a partially flooded cave complex in the country’s mountainous northern region. One of their former members, identified as Saman Kunan, 38, was returning at about 1 a.m. Friday from the chamber where the boys are trapped when he ran out of oxygen, passed out and died.

"He dedicated his life to the operation,” Army Gen. Chalermchai Sitthisad was quoted by the Bangkok Post as saying. “He was a former soldier but he volunteered for this.”

Kunan's body is now being flown to his hometown of Roi Et for a royally-sponsored funeral, the king of Thailand says. Around 100 people observed a 10-minute moment of silence for Kunan Friday as his coffin, covered in the country’s flag, was transported into a Royal Thai Navy plane, the newspaper added.

The Underwater Demolition Assault Unit traces its history back to around the end of World War II, according to an official military biography translated by NationReligionKing.com, which aims to serve as an English-language resource for information on Thailand’s armed forces.

The body of Saman Gunan, a former Thai navy SEAL who died during an overnight mission, is carried during a repatriation and religious rites ceremony at Chiang Rai Airport in Mae Sai . (AP)

The website says in 1952, Thai Ministry of Defense officers met with the United States Military Assistance Advisory Group to explore the creation of an Underwater Demolition Team. From a series of meetings, a resolution was then reportedly given to the Royal Thai Navy to start setting up the unit, but “unfortunately at the time there were not enough instructors from the United States to make the project happen and so it was temporarily put on hold,” the translation says.

The following year, a company affiliated with the U.S. Central Intelligence Agency “was tasked with supporting the initial training of the Royal Thai Navy's Underwater Demolition Team and also the Royal Thai Police Aerial Reinforcement Unit,” it adds. The group would later move on to train in what was reported as “advance courses at unknowable and top-secret places.

“Even though [current] military form has been changed a lot basically the soldiers [are] the doers who [have] to be in discipline, firm, determined, intelligent, can solve problems in advance,” the translation continues, noting the changes in military training following the 9/11 terrorist attacks.

“The unit are under on call alert for international counter-terrorism,” it says.

One section of the biography says the unit trains five times annually with U.S. Navy SEALs, but the Department of Defense could not be reached by Fox News to verify the claim.

In addition to fighting terrorism, Thailand says the force investigates illegal timber smuggling, captures drug smugglers in the Andaman Sea and is the Royal Thai Navy’s escort service in Asia.

“It's easy to find an athlete from Underwater assault team because of their body basically developed from training,” the biography is also reported to say.

The boys being sought in the ongoing rescue mission, aged 11-16, and their 25-year-old coach went exploring in the cave after a soccer game June 23. Monsoon flooding cut off their escape route and prevented rescuers from finding them for almost 10 days as the only way to reach them was by navigating dark and tight passageways filled with muddy water and strong currents.

A senior army commander, Maj. Gen. Chalongchai Chaiyakam, said the most pressing mission is the oxygen line. It is tied to a telephone line to provide a channel of communication for the kids, who are stuck deep in the complex but are being looked after by four SEALs, including a medic.

Oxygen levels are decreasing because of the amount of workers inside the cave and workers were trying to run an oxygen line into the chambers in addition to the oxygen canisters used by divers, Chiang Rai province Gov. Narongsak Osatanakorn said late Thursday. Friday's death of the former SEAL underscores those risks.

Officials prefer to get the boys out as soon as possible because heavy rain is expected by Saturday.