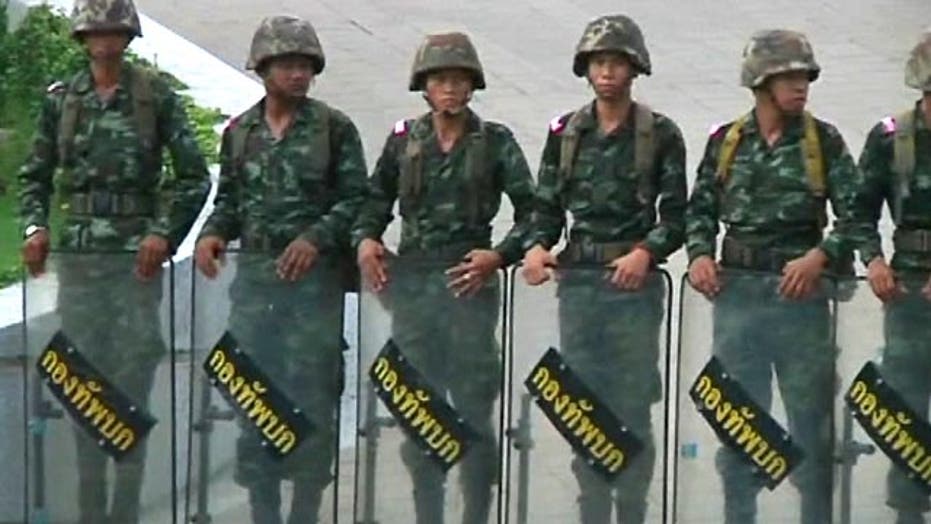 Looking to consolidate their power, Thailand's coup leaders said Saturday they will keep former Prime Minister Yingluck Shinawatra, Cabinet members and anti-government protest leaders in detention for up to a week to give them "time to think," as the junta expanded its target list to include several prominent academics.

The move appears aimed at preventing any political leaders from contacting supporters to rally them against the military, which seized power Thursday after months of sometimes violent street protests and deadlock between the elected government and protesters supported by Thailand's elite establishment.

For a second day, hundreds of anti-coup protesters defied the military's ban on large gatherings and shouted slogans and waved signs outside a Bangkok cinema. Dozens of soldiers with riot shields stood nearby but so far did not move in to stop them.

Deputy army spokesman Col. Weerachon Sukondhapatipak said that all the detained politicians were being well-treated and that the aim of the military was to achieve a political compromise.

"This is in a bid for everybody who is involved in the conflict to calm down and have time to think," Weerachon said. "We don't intend to limit their freedom but it is to relieve the pressure."

The military summoned an additional 35 people including more politicians, political activists and, for the first time, outspoken academics.

One of those on the latest list, Kyoto University professor of Southeast Asian studies Pavin Chachavalpongpun, said by telephone from Japan he would not turn himself in. He said that the summons meant that the junta felt insecure.

"The military claiming to be a mediator in the Thai conflict, that is all just nonsense," he said. "This is not about paving the way for reform and democratization. We are really going back to the crudest form of authoritarianism," he said.

Secretary of State John Kerry has said there was no justification for the coup and has called for the immediate restoration of civilian government and a return to democracy.

Thailand's powerful military says it launched the coup to prevent more turmoil after two days of peace talks in which neither political faction would agree to step aside in their demands.

The anti-government protesters have in recent months blocked streets in Bangkok demanding that the government step down over allegations of corruption and ties to Yingluck's brother, exiled ex-leader Thaksin Shinawatra, who was himself deposed in a 2006 military coup.

Populist parties affiliated with the Shinawatras have won every election since 2001 in Thailand. Thaksin still wields enormous influence over Thailand's political affairs and remains at the heart of the ongoing crisis.

It was unclear Saturday exactly how many political leaders were being detained by the army. On Friday, however, Sky News reported that the army had banned 155 people, including politicians and activists, from leaving the country.

Among the officials who showed up at an army compound in Bangkok on Friday were Yingluck, who was removed from office by a court earlier this month on nepotism charges, and her temporary replacement, Niwattumrong Boonsongpaisan, according to Yingluck's aide Wim Rungwattanachinda.

Several Cabinet members as well as leaders of the anti-government protests have been held since Thursday's coup.

Education Minister Chaturon Chaisang, an outspoken critic of the military's intervention in politics, remained in hiding. Chaturon said in a Facebook post that the coup would only worsen the country's political atmosphere. He vowed not to turn himself in, but said he would not resist arrest.

Human rights groups, including Human Rights Watch and Amnesty International, criticized the detentions of political leaders. U.N. High Commissioner for Human Rights Navi Pillay urged Thailand to "ensure respect for human rights and a prompt restoration of the rule of law in the country."

"The regime must immediately clarify a legal basis for this move and where they are. No one should be detained on the basis for their peaceful political opinions or affiliations," said Richard Bennett, Asia-Pacific director for Amnesty.