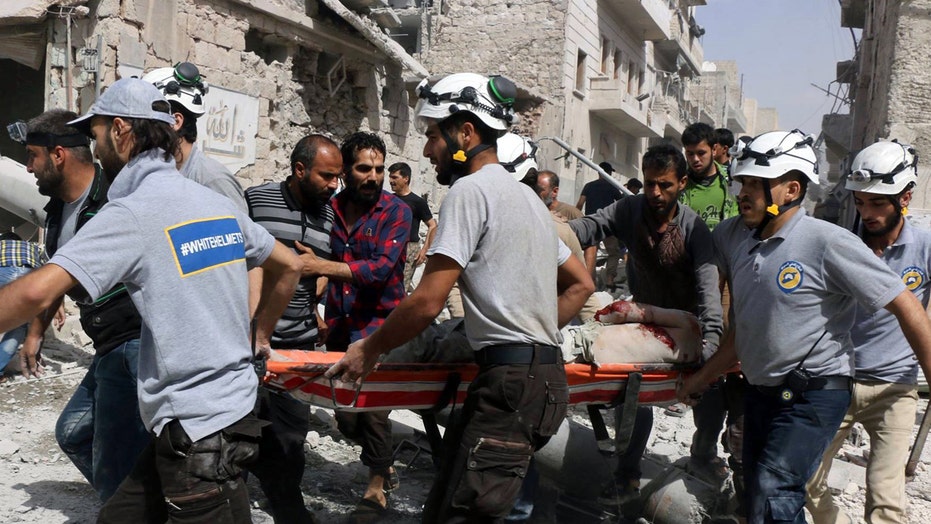 Hundreds of people have fallen victim to an onslaught of airstrikes linked to Russia and the Syrian government in the wartorn city of Aleppo over the past week -- but a video released by Syrian state media suggests that it's still a place for young people to party the night away.

#Aleppo, now dubbed as the "World's Most Dangerous City", still boasts a thriving nightlife, as shown in one of this summer's events #Syria pic.twitter.com/kFUDtGvHME

The video, appearing on the Syrian Arab News Agency's English-language Twitter account over the weekend, shows a packed nightclub with fist-pumping dancers as a D.J. spins tunes. A device resembling a torch shoots out flames at the unnamed club.

A graphic at the end of the video indicated that it was recorded on July 16 somewhere in Aleppo, telling viewers, "Hello Summer."

The video was likely recorded in western Aleppo, an area under government control, according to The Washington Post, which spotted the tweet.

Government shelling and airstrikes in Syria's eastern rebel-held Aleppo landed near a bread distribution center and two hospitals Wednesday, killing seven people and putting at least one of the medical facilities completely out of service, activists and medics said.

The Syrian government and its ally Russia have been accused of targeting medical facilities in rebel-held areas. The U.S.-based Physicians for Human Rights has recorded 382 attacks on medical facilities and hospitals throughout Syria since the start of the conflict in 2011. Of those, 293 were carried out by government forces and 16 were conducted by Russian warplanes, it said.

Hospitals in eastern Aleppo have been overwhelmed with casualties since the start of a government offensive last week in the wake of the collapse of the cease-fire. The international charity Doctors Without Borders, which supports all the hospitals in eastern Aleppo, said doctors in rebel-held areas have reported receiving more than 270 bodies and 800 wounded patients since last Wednesday.