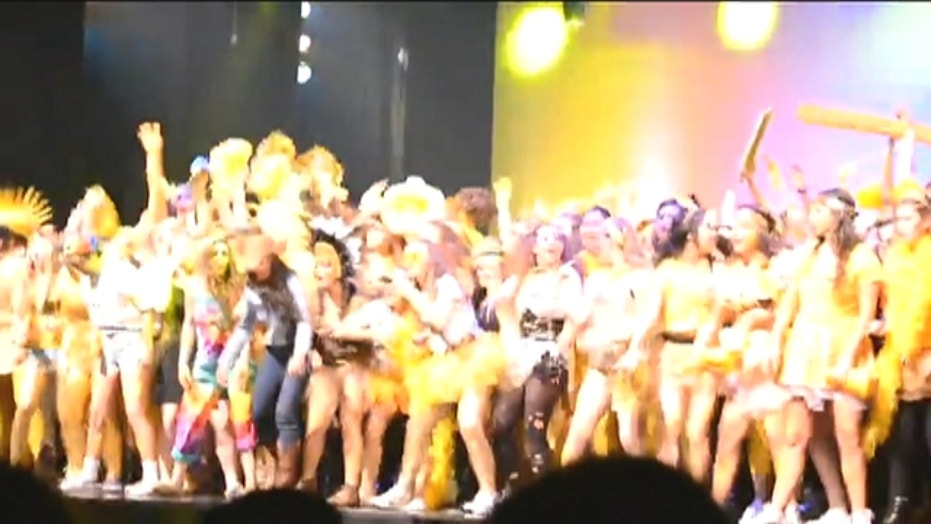 Investigators combed through a collapsed theater stage at a Southern California high school, trying to determine why it buckled during a performance and sent 25 students to the hospital.

ANAHEIM, Calif. (AP) – Investigators combed through a collapsed theater stage at a Southern California high school Sunday, trying to determine why it buckled during a performance and sent 25 students to the hospital, some with broken bones but most with minor injuries like bruises and scrapes, authorities said Sunday.

Police, firefighters and medics responded to a call Saturday night after the wooden stage gave way at Servite High School, an all-boys Catholic school in Anaheim.

About 250 students from nearby Rosary High School, an all-girls sister school, were singing and dancing on the platform when they fell 5 feet, Anaheim police Lt. Tim Schmidt said.

One girl who was on the stage behind the collapsed area said it was the last of several performances and everyone was feeling great when things went suddenly wrong.

"We were all jumping, having fun, we've done it five times before, and then all the sudden the girls in front of me just disappeared," 14-year-old freshman Sabrina Lee told KABC-TV on Sunday afternoon. "I don't know what happened. All I knew was I turned around and ran."

Witness Stephanie Stevenson told the TV station "everyone was jumping around like crazy" when "the very front row just completely fell under. We were all in shock."

More than 100 students, staff and family members from the high school gathered on Sunday to pray and show support for the injured.

The cause appeared to be too many students on stage and too much weight on the platform, Schmidt said.

"We're lucky that no one was seriously injured," he said. "It was a quick, sudden collapse, and the students fell right away."

Inspectors will double-check the school's stage permit to determine if it's up to date. They will also review whether the permit included a weight restriction or a limit on the number of people who could be on stage. The investigation is expected to take two weeks.

The stage was extended in the 1980s to provide more square footage, Schmidt said. It was the add-on that collapsed.

More than 600 students, parents, faculty and alumni were in the auditorium at the time of the accident.

The students were performing in "Red and Gold," Rosary High's annual musical theater challenge since 1971, in which teams prepare for six weeks to put on choral, dance, drama and other performances, according to the school's website.

"Thank you for your prayers and support during this time," Rosary Principal Judy Luttrell said in a statement posted on the school's website after the collapse. "We ask that you continue to pray for our students. We thank you all, the Servite community, and the responders for their calm assistance."

In a statement, the Roman Catholic Diocese of Orange said it was "an unfortunate accident." The diocese said an internal investigation was underway.