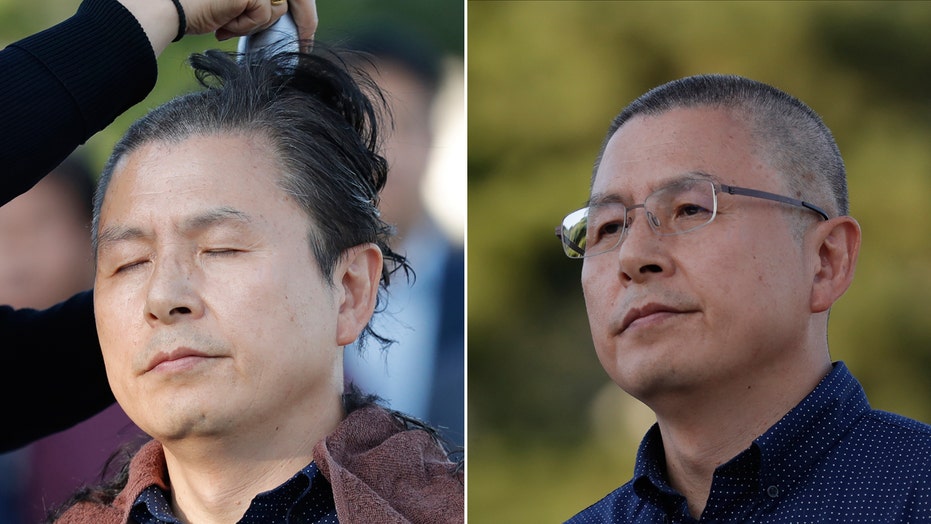 Conservative politicians in South Korea are shaving their heads in protest over the government's newest justice minister after several accusations of academic and financial corruption were leveled against him and his family.

Conservative Liberty Korea Party leader Hwang Kyo-ahn sat in front of Seoul’s presidential palace Monday evening as supporters and journalists looked on while a member of his party removed his hair.

The act, which is a long-standing tradition of protest in South Korea, symbolized calls by the opposition party for newly appointed Cho Kuk to step down as justice minister.

"This is my warning to President Moon Jae-in: Do not go against the will of the people any further," Hwang said. “This is my ultimatum to Cho Kuk: Step down voluntarily from your post and receive an investigation from prosecutors.”

Cho, a law professor and former secretary of civil affairs for President Moon Jae-in, was detained Saturday over suspicions of fraud, embezzlement and attempting to destroy evidence linked to his management of a private equity fund financed by Cho's family.

Female lawmakers Park In-sook of the LKP and independent Lee Un-ju also shaved their heads in past weeks calling for Cho's dismissal.

Allegations have also surfaced that Cho's daughter received special treatment in her admission to a top university in Seoul and a medical school in Busan, which has reignited the debate of class privilege that has previously riddled the government with corruption.

South Korean President Moon, who appointed the embattled politician last week, faces a declining approval rating as defends his decision, saying it would set a "bad precedent" if he withdraws a ministerial nominee based on unproven allegations. (AP)

Prosecutors also have indicted Cho's wife, Chung Kyung-shim, on suspicions of manipulating an award issued to her daughter from a university in the southern city of Yeongju where she works as a professor.

Earlier this month Cho denied the allegations during a news conference.

Moon, who appointed the embattled politician last week, faces a declining approval rating as defends his decision, saying it would set a "bad precedent" if he withdraws a ministerial nominee based on unproven allegations.

Moon also faces pressure over a decaying job market, an uphill trade war with Japan and a fragile diplomacy with nuclear-armed North Korea that is beginning to show signs of falling apart.