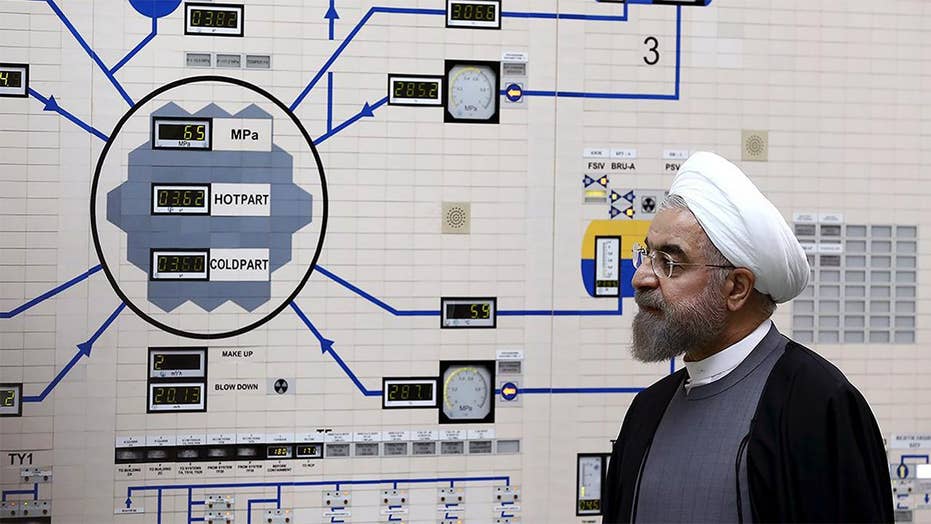 National security experts are voicing growing concerns about the Iranian regime obtaining a nuclear weapon in less than a year; Gillian Turner reports.

The death of Iranian commander Qassem Soleimani, at the orders of President Trump last week, not only has cast a murky shadow on the future of Iraq’s leadership, but also has sent schisms through Syria's leadership, multiple sources tell Fox News.

“Many Syrians wish the U.S. would have killed Soleimani years ago. Perhaps this would not have led to major shifts on the ground, but it is certain that the number of those killed, wounded or displaced would have been fewer,” said Rahim Hamid, a Virginia-based Iranian Arab analyst. “But, many Syrians have felt that they got their revenge.”

In the twisted patchwork of conflicts that the Middle East has been, Syria's policy throughout its long-running civil war has been manipulated largely by the military prowess of Moscow and Tehran. Namely, Soleimani was deemed a chief engineer in aligning with the regime of Syrian dictator Bashar al-Assad and exercising Iran’s military might under the guise of fighting terrorism. Under the slain commander’s governance, Syria received a plethora of weapons, training, and ground support from the top echelon of Iran’s military.

“Soleimani’s project in Syria was to drive away American forces. He was in no hurry because he was busy building the foundations to enhance the Iranian political, military, security, economic and militia influence in Syria and he achieved a lot in this field,” noted Bassam Barabandi, a former Syrian diplomat and founder of the Middle East-focused activism organization, People Demand Change. “Bashar al-Assad is closer to the Iranian influence and the Iranian axis than the Russians within the Syrian regime. But, the Assad regime is split, as never before, into two very distinct wings between pro-Iran and pro-Russia.”

The Iranian wing has been led by Assad, who received his advice and instructions directly from Soleimani, Barabandi underscored. Moreover, Iran has had its own sphere of influence and followers inside the Syrian military.

Over the weekend, Syrian government forces and Iranian associates were documented to have fired several shells at the Conoco gas field in the Deir Ezzor area of eastern Syria, which U.S troops still in the embattled country have been tasked with protecting. Aside from the apparent act of retaliation, sources said that the surprise attack on Soleimani last week has prompted deeper divisions within the Syrian government itself.

While some analysts have speculated that Soleimani’s death will empower Russia in the region, they’ve largely observed a stronger Assad-led tilt toward Tehran over Moscow.

From the lens of one source closely connected to U.S.-Syria policy, Assad – who typically has been less vocal about his conflicts with Israel than many others in the region – has used the incident to ratchet up anti-Israel sentiment, in addition to sending an envoy to Tehran to express condolences.

“It is well known that Russia wants to end the war, but knows that Assad’s image can’t be revived,” the source, who spoke on condition of anonymity, said. “So, his bet is to go to Iran over Russia.”

It remained to be seen exactly what approach Soleimani’s successor, Esmail Ghaani, will take in the region. Historically, analysts have pegged him as being focused on Iranian influence in the east – Afghanistan and Pakistan – while Soleimani set his targets on the western area of Iraq and Syria.

“Trump says that he killed Soleimani to prevent the war, not to ignite it,” Hamid noted. “Syrians have been screaming for many years that Iran’s deterrence is what brings peace to the region, not appeasing it or coping with its agenda.”

Iran has vowed to exact revenge on the United States for Soleimani’s slaying, prompting a flurry of pushback from Trump on Twitter and a bevy of questions as to what would happen next. The Quds Force leader’s death came at a time when the regime and its allies have been closing in on the last Syrian rebel stronghold of Idlib. Almost 300,000 people, according to the United Nations, have escaped the bastion in less than a month amid pro-government attacks – but with few places to run.