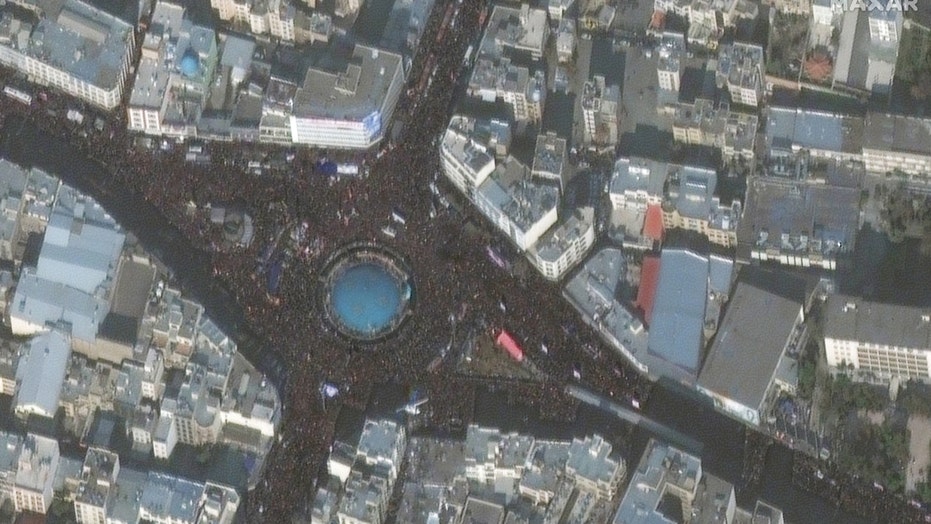 Satellite images show the vast crowds gathered in Tehran for the funeral of Revolutionary Guard Gen. Qassem Soleimani on Monday.

The images were captured by Maxar Technologies’ WorldView-2 satellite.

“The imagery shows crowds that stretch from Azadi Square and for nearly 6 kilometers [3.7 miles] along Azadi Street in central Tehran,” said Maxar in a statement accompanying the images. “Hundreds of buses, used to bring people to the procession, can also be seen parked on roads near Azadi Street.”

The U.S. killed Iran's top general and the architect of Tehran’s proxy wars in the Middle East last week in an airstrike at Baghdad's international airport.

The Defense Department said it killed Soleimani, the head of Iran's elite Quds Force, because he “was actively developing plans to attack American diplomats and service members in Iraq and throughout the region."

SATELLITE IMAGES SHOW PROTESTS AT US EMBASSY IN BAGHDAD

It also accused Soleimani of approving the recent attacks on the U.S. Embassy in Baghdad.

The funeral for Soleimani drew a crowd said by police to be in the millions to the Iranian capital.  Although there was no independent estimate, aerial footage and Associated Press journalists suggested a turnout of at least 1 million.

Iranian State TV estimated that millions of mourners also took part in Soleimani’s funeral procession as it made its way through the cities of Ahvaz and Mashhad Sunday, according to the Times of Israel.  The funeral was said to be the largest in Iran since the funeral of Grand Ayatollah Ruhollah Khomeini, founder of the Islamic Republic, in 1989.