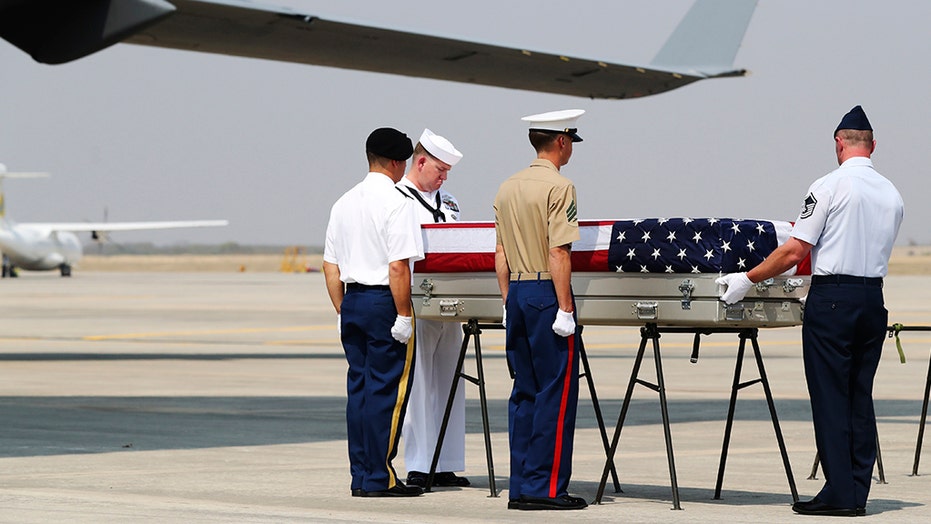 The remains of U.S. military service members who died in action in Myanmar during World War II were returned to the United States on Thursday.

“Over 75 years ago, brave Americans gave their lives on a riverbank in Sagaing, fighting for peace, justice and freedom, far from home,” the U.S. Embassy's Deputy Chief of Mission George Sibley said during a repatriation ceremony at Mandalay International Airport.

U.S. military guard of honor prepare to carry a coffin covered with U.S. national flag during repatriation ceremony at Mandalay International Airport Thursday, in Mandalay, central Myanmar. The U.S. military has repatriated what may be the remains of service personnel who were lost in action in Myanmar during World War II.  (AP Photo/Thein Zaw)

He added: “Today we recommit to those noble values as we repatriate the possible remains of those U.S. citizens, and honor their service and their sacrifices.”

The remains are linked to a B-25G bomber with a crew of seven lost in February 1944. Myanmar – then known as Burma – was a British colony occupied by Japan's armed forces.

The plane's wreckage was located in 1946 and some possible remains were recovered last year in the same region, but have not yet resulted in an identification.

There are more than 500 U.S. service members still unaccounted for in the Southeast Asian country. The remains of 23 have been identified after three recovery missions in 2003 and 2004, and nine since 2009 carried out by the Defense POW/MIA Accounting Agency of the U.S. Department of Defense.

According to the Defense POW/MIA Accounting Agency, more than 72,000 Americans in all remain unaccounted for from World War II, more than 7,800 from the Korean War, and 1,585 from the conflict in Vietnam.