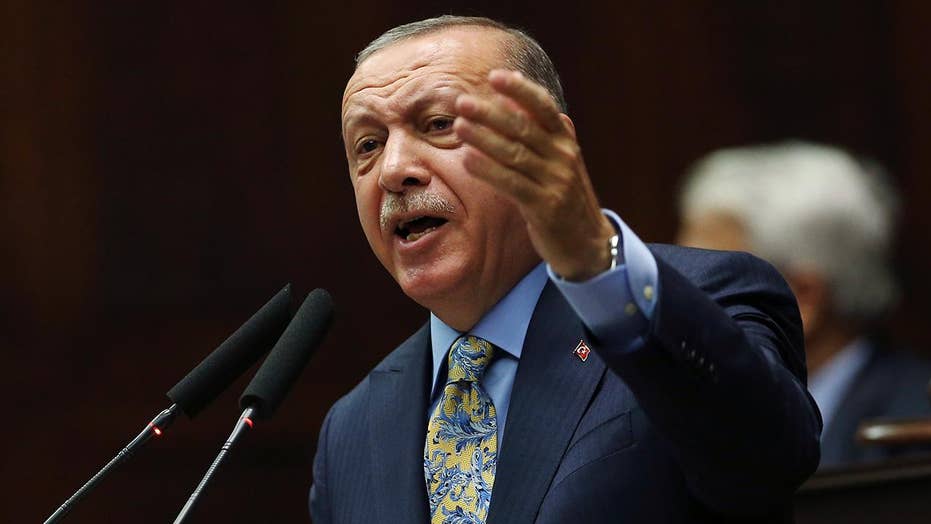 Erdogan calls for action from Saudis on Khashoggi's death

Turkish president addresses parliament on the 'savage murder' at the consulate in Istanbul.

Erdogan revealed the details of the country’s investigation into Khashoggi’s killing after he walked into the Saudi consulate in Istanbul on Oct. 2, contradicting Saudi Arabia’s explanation that the writer was killed in a “fistfight.”

Erdogan fell short of blaming Saudi Crown Prince Mohammed bin Salman and made no mention of whether a tape exists of Khashoggi's killing. However, he kept the pressure on the kingdom with his demands for punishment of all the people involved in the murder.

“All evidence gathered shows that Jamal Khashoggi was the victim of a savage murder. To cover up such a savagery would hurt the human conscience,” he said.

Erdogan said he wanted Saudi Arabia to allow the 18 suspects detained in the columnist’s killing to be tried in Turkish courts.

“To blame such an incident on a handful of security and intelligence members would not satisfy us or the international community,” Erdogan said.

“Saudi Arabia has taken an important step by admitting the murder. As of now we expect of them to openly bring to light those responsible — from the highest ranked to the lowest — and to bring them to justice”

Erdogan laid out a timeline of the events before and after Khashoggi’s death, including the use of a “body double” as a decoy.

Three people flew from Riyadh to Istanbul at around 4:30 p.m. local time on Oct. 1 and went to the hotel and later to the Saudi consulate, Erdogan said, according to Sky News. Another team went from the consulate to Belgrave woods and Yelova, near the consulate, to scout the area, he said.

The next day, Erdogan said, a team of about 15 Saudis met at the consulate between 9:50 a.m. and 11 a.m. He said the team took out the “hard disc” from the consulate’s CCTV and called Khashoggi to let him know he had a meeting at the consulate later in the day.

Khashoggi arrived at the consulate at around 1:08 p.m. local time and was never seen again, Erdogan said. Almost five hours later, Khashoggi’s fiancé alerted authorities that he had been detained or worse.

In his speech, Erdogan suggested Khashoggi was the victim of a “gruesome murder” and said there could be no cover-up.

“I do not doubt the sincerity of King Salman. That being said, independent investigation needs to be carried out. This is a political killing,” Erdogan said, adding Khashoggi’s death was meticulously planned.

Erdogan also noted he spoke with President Trump about the killing, but didn’t reveal details about their conversation.

Trump said Monday he wasn’t satisfied with the explanations he’s heard about the killing of Khashoggi and was waiting for reports from U.S. officials returning from the region.

“We're going to get to the bottom of it. We have people over in Saudi Arabia now. We have top intelligence people in Turkey. They're coming back either tonight or tomorrow,” Trump told the media before leaving a rally in Texas.