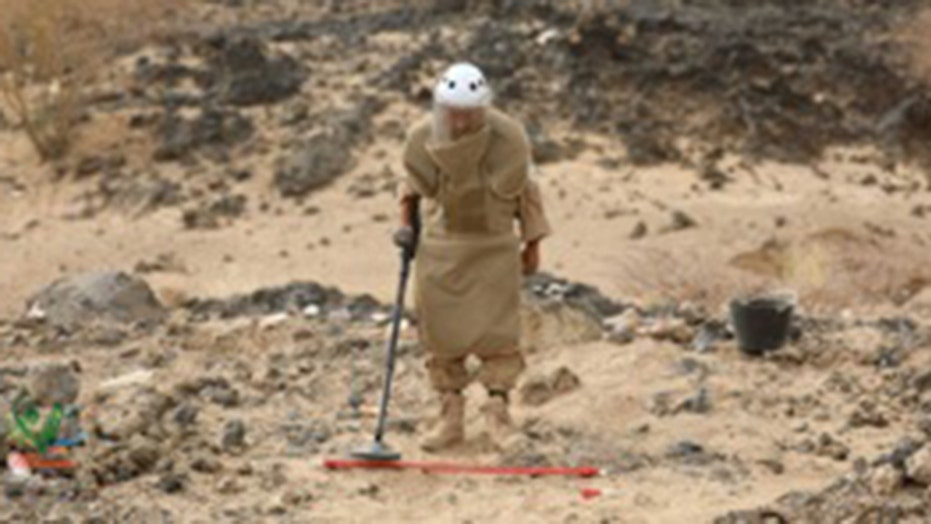 The ongoing civil war in Yemen has resulted in the worst humanitarian crisis in the world today, and Saudi officials have told Fox News that Iran’s continued backing of the Houthi rebels in the country has only exacerbated the crisis.

Col. Turki Al-Maliki, a spokesperson for the Saudi-led Coalition of Arab countries, which supports the legitimate government in Yemen, told Fox News that Tehran, through the Houthis, is "intentionally aggravating the humanitarian crisis.”

In February the United Nations said that Yemen was the worst humanitarian crisis in the world. It noted that tens of thousands had been killed or injured, including more than 17,000 civilians. An additional 18 million people don’t have access to safe water with diseases such as cholera leaving thousands sick – 14 million people are affected with acute malnutrition.

Al-Maliki pointed to statements by UN officials and reports of, “how the Houthis have prevented food supplies from reaching Yemeni civilians and spent months preventing the delivery of vaccines that could have prevented cholera from spreading.”

In February the United Nations said that Yemen was the worst humanitarian crisis in the world. It noted that tens of thousands had been killed or injured, including more than 17,000 civilians. (KSRelief)

Bordering Saudi Arabia and Oman, the conflict in Yemen started when Houthi rebels, who have since been backed by Iran, captured the capital Sana'a and overthrew the internationally recognized government. Fighting has raged on since 2015.

While the two sides agreed to some concessions in December following the Stockholm Agreement and a Security Council resolution that backed it up, the situation remains highly volatile. Earlier this week, Saudi airstrikes targeted a Houthi-controlled facility that, according to the coalition, was used to launch terrorist drones.

“Iran, by contrast,” he lamented, “has given not a penny. It only provides weapons, ideology and the tactics of violence.”

A United Nations report in September, commissioned by the Human Rights Council, called out all sides, declaring that violations of international humanitarian law had been committed. It also expressed the possibility of war crimes being committed.

A United Nations report in September, commissioned by the Human Rights Council, called out all sides, declaring that violations of international humanitarian law had been committed. It also expressed the possibility of war crimes being committed. (KSRelief)

Just last month President Trump vetoed a Congressional resolution, supported by Democrats and some Republicans, that would have ended U.S. military assistance to the Saudi coalition.

While Iran does not seem to feature in the U.N. report, it continues to deny it supplies arms to the Houthis. Its claims, however, were rebuffed by a United Nations Security Council Panel of Experts report last year that found Iran had violated U.N. resolutions by failing to take, “necessary measures to prevent the direct or indirect supply, sale or transfer” of missile remnants, military equipment and drones to Houthis rebels.

Behnam Ben Taleblu a Senior Fellow at the Foundation for Defense of Democracies in Washington D.C. told Fox News that Iran’s support to the Houthis, “has been able to stymie and bleed Riyadh", Tehran’s chief regional competitor in the Persian Gulf.

It is also designed to further ensnare the Saudis and do damage to their national reputation, even as they prosecute a war against a rebel movement underwritten by the world’s foremost state sponsor of terrorism,” he said.

Al-Maliki said the Houthis are a small minority in Yemen and the vast majority of Yemenis reject their domination and, “Iranian indoctrination.”

“They have conducted an extensive and malicious international propaganda war that too many in the Western media - thousands of miles from the battlefield and with limited knowledge of Yemen’s history or culture - have treated as the truth," he added.

Sensitive to international criticism, the Saudis are keen to highlight the billions of dollars in humanitarian aid and help it has provided to Yemen.

“The Iran-backed Houthi militias have planted more than 1.1 million mines in Yemen, making it the most mined country since the Second World War,” stated Dr. Abdullah Al Rabeeah in an email to Fox News.

Al Rabeeah heads The King Salman Humanitarian Aid and Relief Center (KSrelief). He said his organization has plowed over $40-million into a demining project known as “Masam.”

So far he said they have deactivated 53,000 mines and established centers to serve amputees and the injured.

“The danger is grave. We understand that more than 1,000 Yemenis have been killed due to mines. More than 2,000 have been injured.  Despite widespread international criticism, the Houthis have not stopped planting mines.”

Al Rabeeah believes there is a way to end the carnage and stop the suffering.

“We all know that the one action that would have the greatest impact for Yemen would be for the Houthis and their Iranian backers to end this terrible war, grant the UN unfettered access to the country, allow Yemen's legitimate government to reassert authority over the entirety of the country, and enable much larger scale aid and redevelopment to benefit Yemen's long-suffering civilians,” he said.

Fox News' Adam Shaw and the Associated Press contributed to this article.