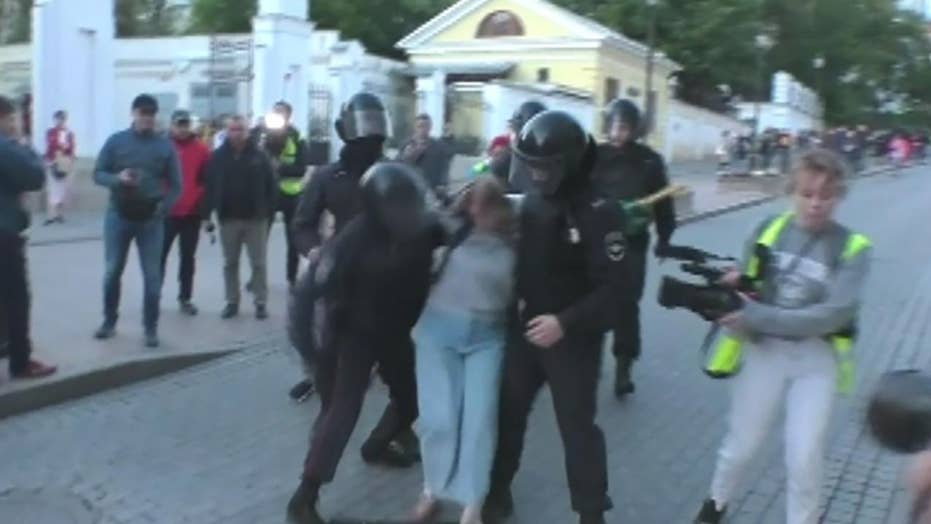 Raw video: A Russian police officer is seen punching a female protester in the stomach during a political demonstration in Moscow.

Footage has emerged from protests in Russia which appears to show a police officer violently punching a female demonstrator in the stomach.

The video was captured during a Saturday rally in Moscow, where around 60,000 people gathered for a sanctioned demonstration to reflect the widespread frustration with Russia's tightly controlled politics.  It was the largest such gathering in eight years, according to officials,

Five officers, two of them armed with batons, can be seen dragging a woman, identified by Reuters as 26-year-old Daria Sosnovskaya. One of the officers, frustrated by the defiant protester, appears to punch her in the stomach.

The five officers dressed in body armor proceed to escort Sosnovskaya to a police-marked bus where she continued to struggle with police.

Over 200 people were arrested after Saturday’s rally in what officials called an illegal protest.

The video sparked outrage throughout Europe with some celebrities even sharing it to their social media.

Russian singer Egor Krid shared the video to his more than 10.7 million followers.

“What kind of a scumbag do you need to be to hit a member of the fairer sex,” a Reuters translation of his post read. “I don’t care what she did. This kind of thing just shouldn’t happen.”

Another musician with over 4 million followers, Sergey Lazarev, also shared the video.

On Tuesday, the Kremlin spoke out officially for the first time on the protests.

Spokesman Dmitry Peskov said that Russian President Vladimir Putin has not spoken out about the demonstrations because he does not think there is anything "exceptional" about them, adding that “protests happen in many countries.”

Peskov also addressed accusations of excessive police force, telling reporters: “We believe that a disproportionate use of force by law enforcement officers is absolutely unacceptable but we think that the police response in clamping down on rioting was totally justified.”

The Moscow protests originally started last month as a reaction to authorities' refusal to register a number of independent candidates for the upcoming election to the Moscow city legislature. They have since grown to include overall dissatisfaction with Russia’s politics.