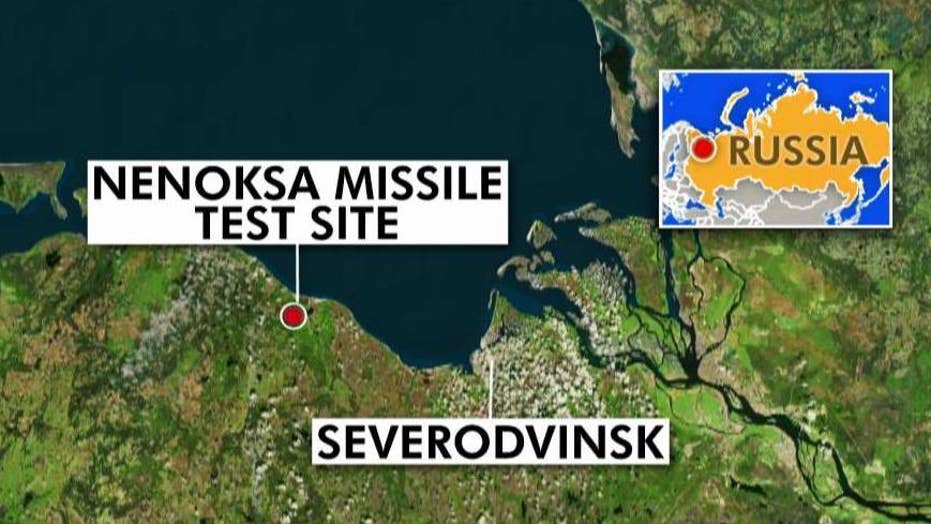 Radiation levels continue to spike after a deadly explosion at a missile test site in Russia; Lucas Tomlinson reports.

A mysterious explosion in northern Russia caused radiation levels to spike up to 16 times above normal, the state weather agency said Tuesday, amid reports that evacuations have been ordered in the village not far from the blast site and medics who treated the initial victims have been ordered back to Moscow.

Russia's Defense Ministry initially said the blast killed two people and injured six, but the state-controlled nuclear agency, Rosatom, later disclosed that the explosion killed five of its workers and injured three others. Rosatom said the explosion occurred while engineers were testing "a nuclear isotope power source" for a rocket.

The group of engineers was thrown into the sea by the explosion.

Russia's state weather agency, Rosgidromet, said on Tuesday that it believed radiation levels had risen by four to 16 times after the accident, the TASS news agency reported.

Local authorities in nearby Severodvinsk, a city of 183,000, initially reported a brief spike in radiation levels after the explosion but claimed it didn't pose any health hazards. Data cited by Greenpeace from Russia’s Ministry of Emergency Situations, however, showed radiation levels rose 20 times above the normal level in the city, which is about 18 miles from the testing site.

Even though authorities said the brief spike didn't pose any health hazards, regional authorities in northwestern Russia said Tuesday the military has advised residents of the village near a navy testing range to move out following the rocket explosion. The Interfax news agency reported that the regional administration based in Severodvinsk said a notice from the military recommended the evacuation due to unspecified activities at the test range.

While officials offered no further details about the advisory for the village of Nyonoksa, Interfax reported that the evacuation was ordered as clean-up work is being carried out after the blast, according to Reuters.

Local news outlet TV29.ru reported that Nyonoksa residents would be evacuated by train to "a safe distance." The village is located about 30 miles from Severodvinsk.

Russia's state weather agency, Rosgidromet, said on Tuesday that it believed radiation levels had risen by four to 16 times in the nearby port city of Severodvinsk after the accident (Google Maps)

Meanwhile, medics who treated victims of the explosion have been ordered back to Moscow for a medical examination, the TASS news agency reported. The medics have signed non-disclosure agreements about the nature of the accident, according to the news report.

The Kremlin on Tuesday did not address any reports of the evacuation, instead telling reporters that Russia remains ot the forefront in developing new nuclear weapons.

"I can assure that all relevant agencies are working to fully ensure safety of Russian civilians," Kremlin spokesman Dmitry Peskov said, according to Interfax.

Neither the Defense Ministry nor Rosatom mentioned the type of rocket that exploded during the test, saying only that it had liquid propellant. But Rosatom's mention of a "nuclear isotope power source" led some Russian media to conclude it was a missile Russia calls the 9M730 Buresvestnik. The NATO alliance has designated it the SSC-X-9 Skyfall.

During his 2018 state of the nation address, Russian leader Vladimir Putin unveiled the missile, along with other new weapons that he said made NATO's U.S.-led missile defense system "useless."

The Russian leader claimed the nuclear-powered cruise missile had an unlimited range, flew at a high speed and was capable of maneuverability that would allow it to pierce any missile defense. While Putin boasted of the ability to strike long-range targets, two U.S. officials briefed on Moscow's military capabilities told Fox News at the time the weapon was not operational yet and still in its “nascent" stage.

“The nuclear-powered cruise missile Putin bragged about has actually crashed a few times,” during recent testing in the Arctic, one official said. “Think about the environmental impact of that,” the official added. Both agreed to speak only on the condition of anonymity because they were not authorized to speak with the media.

President Trump weighed in Monday on the blast, tweeting, "The United States is learning much from the failed missile explosion in Russia. We have similar, though more advanced, technology. The Russian 'Skyfall' explosion has people worried about the air around the facility, and far beyond. Not good!"

The U.S. and the Soviet Union pondered nuclear-powered missiles in the 1960s, but they abandoned those projects as too unstable and dangerous.

Thousands of people attended the funerals Monday of the five Russian nuclear engineers as they were laid to rest in Sarov, which hosts Russia's main nuclear weapons research center, where they worked. Flags flew at half-staff in the city 230 miles east of Moscow that has been a base for Russia's nuclear weapons program since the late 1940s. The coffins were displayed at Sarov's main square before being driven to a cemetery.

Rosatom director Alexei Likhachev praised the victims as "true heroes" and "pride of our country."

"Our further work on new weapons that we will certainly complete will be the best tribute to them," Likhachev said during the funeral, according to Rosatom. "We will fulfill the Motherland's orders and fully protect its security."