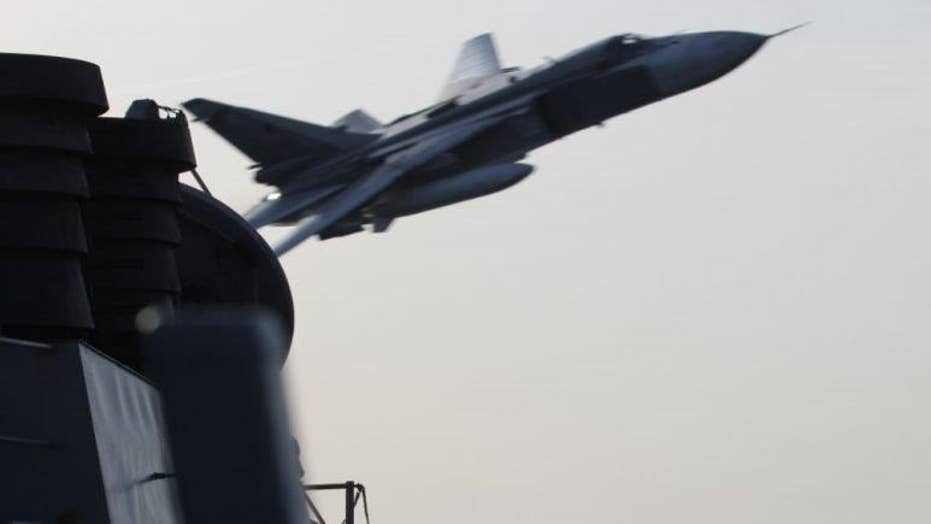 Two Russian warplanes buzzed a U.S. Navy guided-missile destroyer in the Baltic Sea in what a defense official called a "simulated attack profile," one of several close encounters between the destroyer and the aircraft this week.

The USS Donald Cook (DDG-75) was conducting flight operations with a Polish helicopter Monday when two Russian Su-24 attack aircraft approached at an “unsafe” speed and altitude and buzzed the Navy destroyer as the helicopter was taking off from the destroyer’s flight deck, the defense official told Fox News.

The United States and Russia have an agreement that dates back to 1972 that is supposed to prevent this type of behavior, according to the defense official. Turkey shot down a Russian jet of the same type in late-2015 after the aircraft entered Turkish airspace.

The defense official tells Fox News the Russian jets conducted 20 passes in the Baltic Sea incident Monday, ignoring repeated radio calls from the Navy destroyer. The U.S. Navy was able to take photographs and video of the incident and plans on releasing the footage soon.

The USS Donald Cook came no closer than 70 nautical miles of Kaliningrad, Russia. The defense official suspects the Russian aircraft flew from Kaliningrad.

This is not the first time this U.S. Navy destroyer has seen Russian planes up close. In April 2014, Russian jets buzzed the USS Donald Cook in the Black Sea in a similar provocative fashion.

It comes as comes as the U.S. and Russia take part in talks to end the Syrian civil war. The State Department also thanked Russia last week for helping to secure the release of a U.S. citizen from Syria.

According to a statement from the U.S. Embassy in Poland, the USS Donald Cook arrived in the port city of Gdynia on Friday.

This latest provocation from the Russian military comes over two months after a similar dangerous incident took place in the Black Sea in late January, when a Russian fighter jet intercepted a U.S. Air Force spy plane.

The U.S. Air Force has seen more flights of Russian Tu-95 “Bear” bombers in the past year off the coast of Alaska in recent months. Air Force F-22s remain on alert in Alaska to scramble when these Russian nuclear-capable bombers appear on radar heading near the U.S. coast.

On July 4th, as Americans were celebrating Independence Day, a flight of two Russian Tu-95 Bear bombers was intercepted by U.S. Air Force F-15s 39 miles off the coast of Mendocino, Calif.

Russian President Vladimir Putin called President Obama at some point that day to wish him a happy Independence Day. The Russian bombers did not enter U.S. territory during the incident.