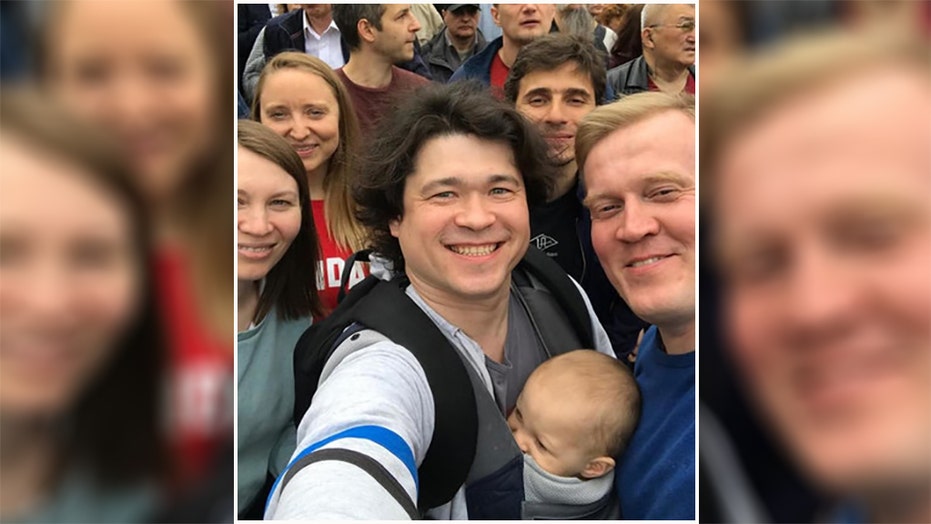 A Russian couple could lose custody of their one-year-old son after prosecutors allege they endangered the welfare of the child by taking him to an unauthorized protest where police detained more than 1,400 people, a claim the couple vehemently denied.

Moscow’s Prosecuting Office announced Tuesday that it was pursuing a case where a young couple, later identified as Dmitri and Olga Prokazov, “abused their parental rights” after they took their son to a violent protest on July 27 where he was reportedly handed off to a man who investigators claim used the boy as a shield to cross police lines.

RUSSIAN OPPOSITION LEADER MAY HAVE BEEN POISONED, DOCTOR SAYS

“During the rally, the parents transferred the young child, who was helpless due to age, to a third party, which endangered the health and life of the boy,” a statement posted to the prosecutor's website read. “Thus, the spouses, while exploiting the child, abused their parental rights to the detriment of the interests of the son.”

Moscow’s Prosecuting Office announced Tuesday that it was pursuing a case where a young couple, later identified as Dmitri and Olga Prokazov, “abused their parental rights” after they took their son to violent protest on July 27 where he was reportedly handed off to a man who investigators claim used the boy as a shield to cross police lines.

Officials said that the parents violated federal law which allows them to remove the child from the home.

“These violations served as the basis for the direction of the prosecutor in the order of h. 1 Article. 45 Code of Civil Procedure of the Russian Federation in court applications for deprivation of parental rights of spouses in relation to a minor child.”

But the couple denies the allegations, telling BBC Russia, they were simply out for a walk when they saw their good friend.

"We knew that a rally for honest elections was being planned, and we were in solidarity with this... and so we weren't afraid," Dmitri Prokazov said.

In this file photo dated Saturday, July 27, 2019, police block a street during an unsanctioned rally in the center of Moscow, Russia. (AP)

He said the couple spotted their friend Sergei Fomin, whom he described as his wife’s cousin and his best friend, and tried to get him to leave with them - handing their son to him at one point.

It didn't even occur to me that I was doing something remotely wrong," he said.

Fomin is now being sought by authorities on charges of inciting riots, and investigators have claimed that he used the child as a shield to cross police lines. Prokazov has denied this, saying they weren't anywhere near police cordons and the child was never in jeopardy.

Moscow’s children's rights ombudsman Yevgeny Bunmovich criticized the prosecutors' action, denouncing what he called "political blackmail involving children." He said he has written to Moscow's prosecutor urging him to drop the charges.

Jon Huntsman to resign as ambassador to Russia, return to Utah

U.S. Ambassador to Russia Jon Huntsman has sent a resignation letter to President Trump outlining his intentions to return to his home state of Utah.

Members of the presidential human rights council also criticized the prosecutors' action, which comes amid a slew of criminal cases launched in the wake of protests that challenged the Kremlin.

Police arrested more than 1,400 people during last month's rally in the Russian capital where demonstrators were protesting the exclusion of opposition candidates from the city council election in September.

An additional 1,001 were arrested Saturday during a second demonstration.