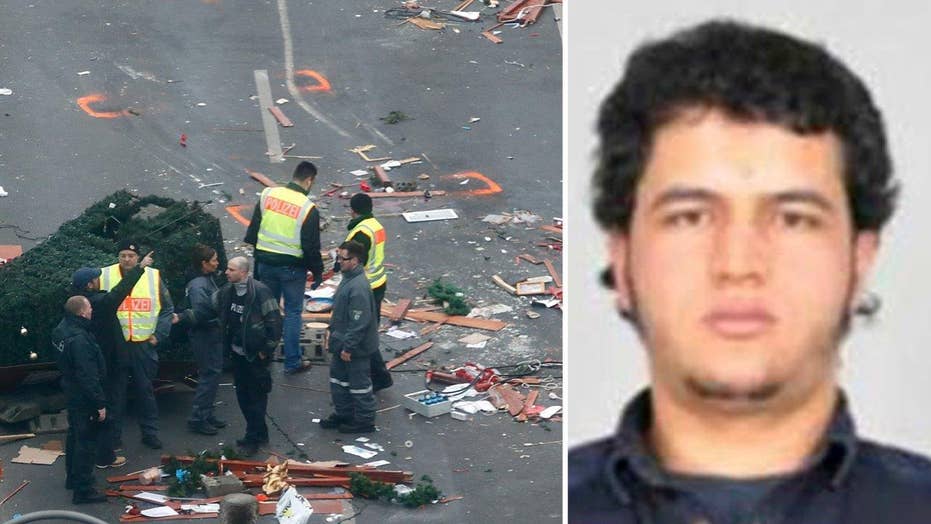 The fugitive suspected of driving a truck into a crowded Berlin Christmas market on Monday was on the radar of German authorities as far back as June, when they tried - and failed - to deport him after learning he was plotting a "serious act of violent subversion," a German official told The Washington Post.

Further, security agencies exchanged info as recently as November that allegedly tied Anis Amri to Islamist militants, yet the Tunisian-born 24-year-old was able to evade terror investigators in the lead-up to Monday's ISIS-claimed massacre, which killed 12 and wounded 48.

Berlin prosecutors told The Associated Press in a statement Wednesday that they first launched an investigation against Amri on March 14 followed a tip from federal security agencies.

The tip warned that Amri might be planning a break-in to finance the purchase of automatic weapons for use in an attack.

Surveillance showed that Amri was involved in drug dealing in a Berlin park and involved in a bar brawl, but there was no evidence to substantiate the original warning and the observation was called off in September.

German police said Amri's wallet and identification papers were found in the cab of the truck used in the terror attack, however, authorities didn't name Amri as a suspect until Wednesday morning and first arrested two other men -- who were subsequently released due to a lack of evidence.

Amri is believed to have multiple aliases and is said to be armed and dangerous. Officials have offered a 100,000-euro reward for information leading to Amri's capture.

Authorities have yet to recover a gun they say was used in Monday's attack. Police believe Amri beat and shot a Polish truck driver to death before using his vehicle to ram the market crowd.

DUTCH POLITICIAN: MERKEL HAS BLOOD ON HER HANDS AFTER BERLIN

He arrived in Germany in July 2015 as an asylum-seeker and was considered part of the "Salafist-Islamist scene" by authorities.

Amri spent some time in pre-deportation detention in Germany after his asylum application was rejected in June 2016, said Stephan Mayer, a senior lawmaker with Germany's governing conservatives. But North Rhine Westphalia Interior Minister Ralf Jager told The Washington Post that Tunisia initially denied he was a citizen of the country and then delayed the issuance of his passport -- which only arrived Wednesday, two days after the Berlin attack.

Amri was registered in an asylum-seekers' hostel, however, he was known to move around often, Der Spiegel reported.

At some point earlier this year, authorities classified Amri as a "potential threat."

He was a follower of the recently arrested Abu Walaa, an Iraqi citizen and preacher who was believed to be one of the top ISIS leaders in Germany, according to Suddeutsche Zeitung.

Die Welt reported that Amri had stayed with another suspected Islamist in Germany and had recently sought to obtain weapons. German officials were reportedly monitoring his communications.

As part of the manhunt, German authorities have been scouring hospitals after reportedly finding Amri's DNA inside the truck and concluding he likely sustained an injury during the Christmas market attack.

Some police raids had been delayed or cancelled due to administrative errors, Die Welt reported.

Prior to arriving in Germany, Amri spent four years in an Italian prison for burning a school, Reuters reported, citing a Tunisia radio interview with his father and security sources. Amri was also reportedly convicted in absentia for aggravated theft with violence and sentenced to five years in prison.

ISIS claimed "a soldier of the Islamic State carried out the attack in response to calls for targeting citizens of the Crusader coalition." The attack, which mirrored the ghastly massacre in Nice over the summer, appeared to follow several of the terror group's online guides for committing acts of terror using vehicles.

Spokesmen for the Tunisian Interior Ministry and Foreign Ministry did not have information about Amri and could not immediately confirm whether the Tunisian government had been contacted by German authorities.