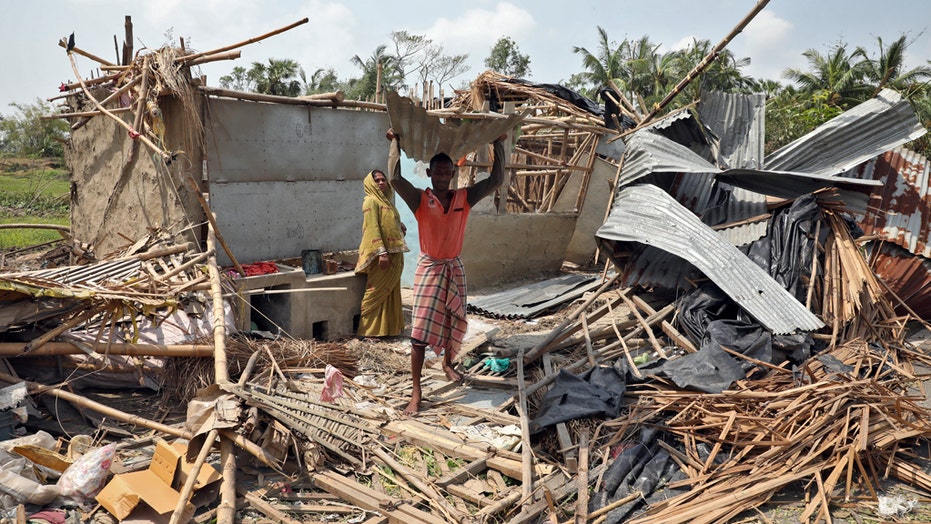 In India's West Bengal state, which bore the brunt of the storm that caused extensive flooding in its capital Kolkata, police and disaster response teams removed fallen trees and other debris, repaired communication lines and began moving hundreds of thousands of people out of shelters.

Roadside vendors along a metro station salvage material from his stall after Cyclone Amphan hit the region in Kolkata, India, May 21. (AP Photo/Bikas Das)

Amphan hit land Wednesday as the most powerful storm in the region in more than a decade, dumping heavy rain amid a battering storm surge.

West Bengal Chief Minister Mamata Banerjee said the cyclone should be treated as a national disaster and appealed for assistance from the federal government.

Motorists make their way through damaged cables and a tree branch fallen in the middle of a road after Cyclone Amphan hit the region in Kolkata, India, May 21. (AP Photo/Bikas Das)

It was Modi's first trip outside the national capital after imposing a coronavirus lockdown in late March.

"The country is already going through a crisis and during that time we have to deal with a cyclone," Modi said in West Bengal.

He announced a $195 million relief fund for the two storm-battered states.

Commuters move past a tree branch precariously hanging after cyclone Amphan hit the region, in Kolkata, India, May 21. A powerful cyclone that slammed into coastal India and Bangladesh has left damage difficult to assess Thursday. (AP Photo/Bikas Das)

WHAT IS A BOMB CYCLONE?

The cyclone has raised fears it could exacerbate the spread of the coronavirus in overcrowded emergency shelters.

In an initial assessment, officials in Bangladesh said the cyclone caused about $130 million in damage to infrastructure, housing, fisheries, livestock, water resources and agriculture. The full extent of the damage along India's eastern coast was not immediately known.

Authorities in both countries managed to evacuate more than 3 million people before Amphan struck.

It least 80 people were killed in West Bengal state and two deaths were reported in Odisha state. Broadcasters in Bangladesh reported 22 deaths.