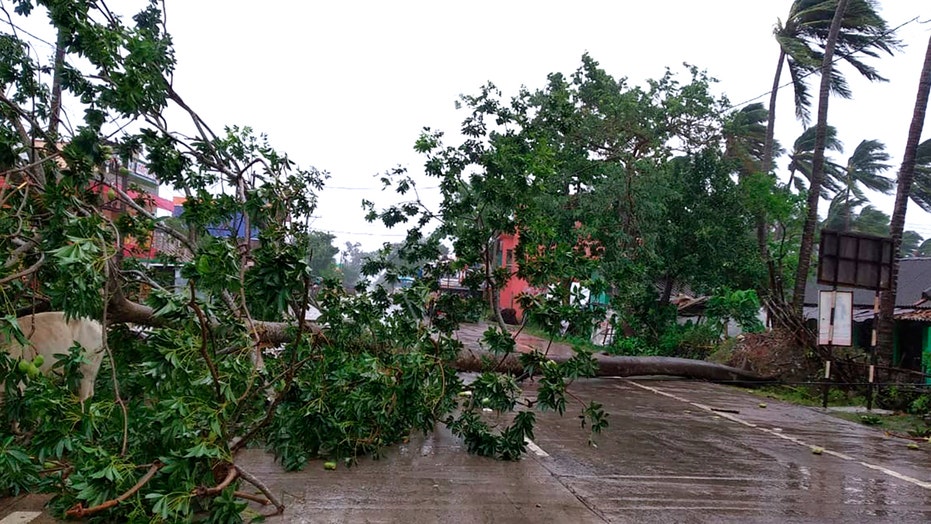 National forecast for May 20

One of the strongest storms in more than a decade roared ashore in eastern India and Bangladesh Wednesday, packing heavy rain and wind as millions fled to shelters in an evacuation complicated by the coronavirus pandemic.

Cyclone Amphan, the equivalent of a Category 3 hurricane, brought winds of up to 105 miles per hour and maximum gusts of 118 mph as it approached the coast.

“The next 24 hours are very crucial. This is a long haul," India’s meteorological chief Mrutyunjay Mohapatra said Wednesday.

The storm weakened from a super cyclone of Category 5 strength earlier this week to an “extremely severe cyclonic storm."

Amphan made landfall between Digha, a seaside resort in West Bengal, and the Hatiya Islands in Bangladesh. The eye of the storm was likely to pass through the Sunderbans, one of the largest mangrove forests in the world, India's meteorological department said.

In the city of Kolkata, electric poles were scattered on the roads and trees were downed as rain pounded fishing villages and rivers surged.

People walk with umbrellas in the rain ahead of Cyclone Amphan landfall, at Bhadrak district, in the eastern Indian state of Orissa, May 20, 2020. (AP Photo)

Footage from the Indian port city of Paradepp showed damage from fierce winds.

In Bangladesh, a junior minister for disaster management, Enamur Rahman, told Reuters that about 2.4 million people in the most vulnerable districts had shifted to more than 15,000 storm shelters.

“It has been challenging to evacuate people while maintaining distancing," Rahman told the news agency. "We have doubled the number of the cyclone centers to ensure safe distancing and hygiene."

A man covers him head with a box and walks in the rain ahead of Cyclone Amphan landfall, at Bhadrak district, in the eastern Indian state of Orissa, May 20, 2020. (AP Photo)

Areas at risk of landslides were stabilized with bamboo and concrete walls. But the combination of the virus and the cyclone could lead to a “new humanitarian crisis,” according to Manuel Pereira, deputy chief of mission for the International Organization for Migration in Bangladesh.

The promenade along the Bay of Bengal coast stands deserted ahead of Cyclone Amphan landfall, at Chandbali, in the eastern Indian state of Orissa, May 20, 2020. (AP Photo)

“We know that if people are forced to seek communal shelter, they’ll be unable to maintain physical distancing and run the risk of contracting or transmitting the virus," Pereira told The Associated Press.

Trees lie uprooted on a highway from heavy winds ahead of Cyclone Amphan landfall, at Chandbali on the Bay of Bengal coast in Orissa, India, May 20, 2020. (AP Photo)

Authorities in India reported that it was difficult to find places for thousands of evacuees because shelters were being used as coronavirus quarantine centers.

Police in West Bengal told Reuters that some people were unwilling to go to the shelters because they were afraid of being infected with COVID-19.

A man struggles to hold his umbrella and walk against high wind in Kolkata, India, May 20, 2020. (AP Photo/Bikas Das)

“We have literally had to force people out of their homes, make them wear masks and put them in government buildings,” a senior police official in Kolkata told the news agency.

A man covers himself with a plastic sheet and walks in the rain ahead of Cyclone Amphan landfall, at Bhadrak district, in the eastern Indian state of Orissa, May 20, 2020. (AP Photo)

Officials feared the storm will turn out to be the most powerful to strike the region since a cyclone killed 3,500 people in 2007.

Most of the deaths in that storm were due to storm surge, according to the BBC.