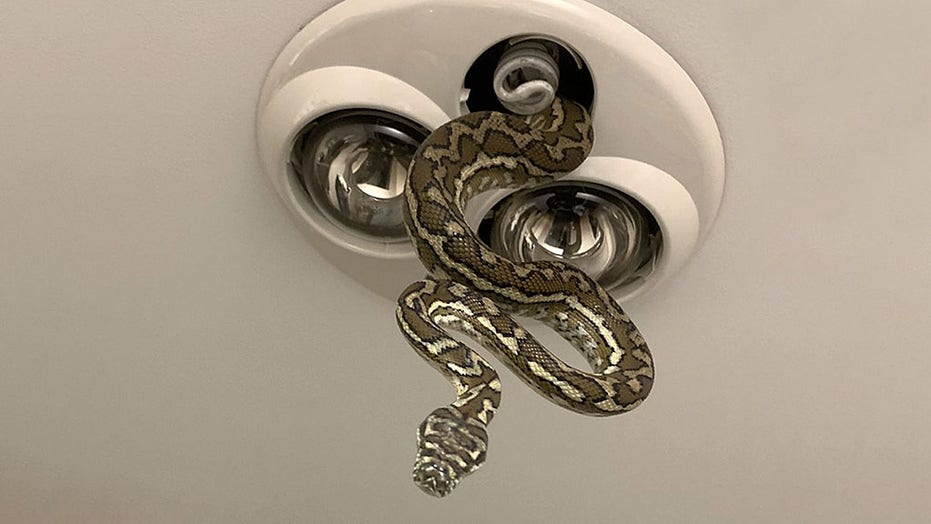 Two Australian children were brushing their teeth and getting ready for bed Monday when they were confronted by a 5-foot long python in their bathroom.

The snake had slithered its way into their Brisbane, Queensland home, eventually finding its way through a missing lightbulb fixture in the bathroom ceiling.

Snake catcher Bryce Lockett was called by the family to remove the reptile from their home, according to The Sun. He later released it into a local creek after taking some photographs for a keepsake.

The youngsters spotted the five-foot serpent dangling from the ceiling at their home in Brisbane, Queensland, on Monday evening. (Bryce Lockett/Mercury Press)

“I’ve been catching snakes for about 7 years now, I’ve seen them all in various situations," Lockett said.

“Carpet pythons are nocturnal and coldblooded, which is why this one must have slithered down to enjoy the heat of the lamp - they’re harmless but they don’t like to be disturbed.”

Lockett said it was surprising that the snake managed to slip through the light fixture, adding that one-third of Australian residents have snakes hidden in their roofs.

“People are generally quite terrified of them but I’ve owned snakes my whole life so I’m not too fazed.”