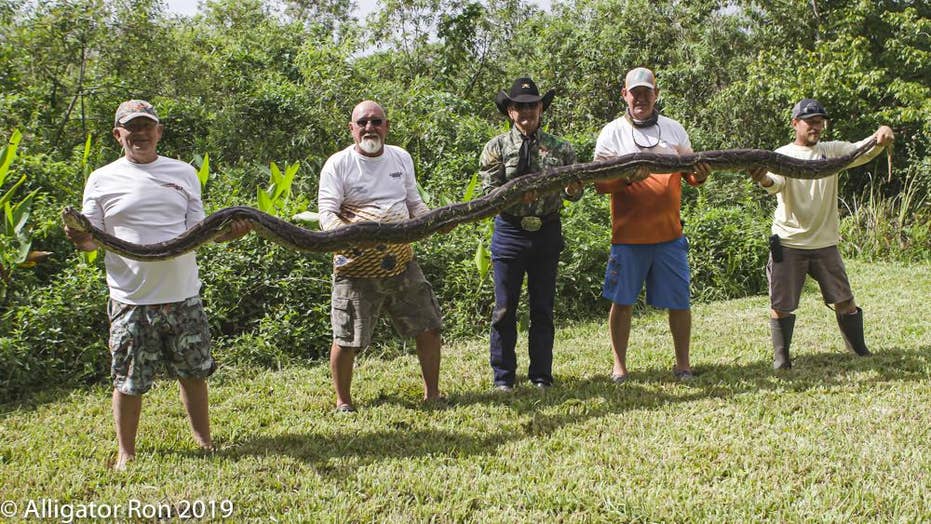 Massive 16-foot python with dozens of eggs in its nest was removed from Florida Everglades.

A female Burmese python that stretched 16 feet was found in the Florida Everglades over the weekend with its nest of nearly 50 eggs.

Ron Bergeron, an Everglades conservationist, removed the 165-pound snake from its nest beneath a home in Possum Head Camp, about four miles south of Alligator Alley. Some eggs hatched as Bergeron inspected the nest. Brian Van Landingham and Frank Branca assisted in the capture and destruction of the snake and its nest.

“The Burmese python poses a significant threat to the Florida Everglades by disrupting the natural food chain,” Bergeron, who goes by the nickname “Alligator Ron,” told the South Florida Sun-Sentinel. “With good fortune, we were able to find a large female, and remove her and an entire nest of up to 50 baby snakes which would have continued killing off our precious habitat.”

The Burmese python is an invasive species of snake that is damaging the natural ecosystem of the Everglades, experts have said. (Ron Bergeron)

Native to Southeast Asia, the Burmese python is one of the largest snakes and considered an invasive species. It began appearing in the Everglades more than 20 years ago when the reptiles were imported as pets, the U.S. Department of Agriculture states on its website.

The apex predator has caused severe declines in mammal populations in the Everglades, including endangered species, according to the Everglades Cooperative Invasive Species Management Area.

Bergeron said in a video posted online that the reptiles eat rabbits, possum, deer and bobcats. A Burmese python has previously been seen devouring a 7-foot alligator in the Everglades, according to National Geographic.

The python caught over the weekend measured 16 feet, 1-inch long. It was about 1 foot shy of the record length in Florida. (Ron Bergeron)

Wildlife officials encourage the removal or humane killing of the Burmese python to reduce its impact on the environment. The pythons can be killed at any time throughout the year and no permit is required, according to the Florida Fish and Wildlife Conservation Commission (FWC).

The snakes can reach a length of over 25 feet and weigh as much as 200 pounds. The average size of a python removed in Florida is usually between 8 and 10 feet, the agency said.

The Burmese python Bergeron helped remove was 16 feet, 1-inch long — about 1 foot shy of the record-setting length of the Everglades python captured in April.

Bergeron, a board member of the South Florida Water Management District, said he and Florida Gov. Ron DeSantis are working on a plan to “increase the pressure” on the pythons to preserve the Everglades.