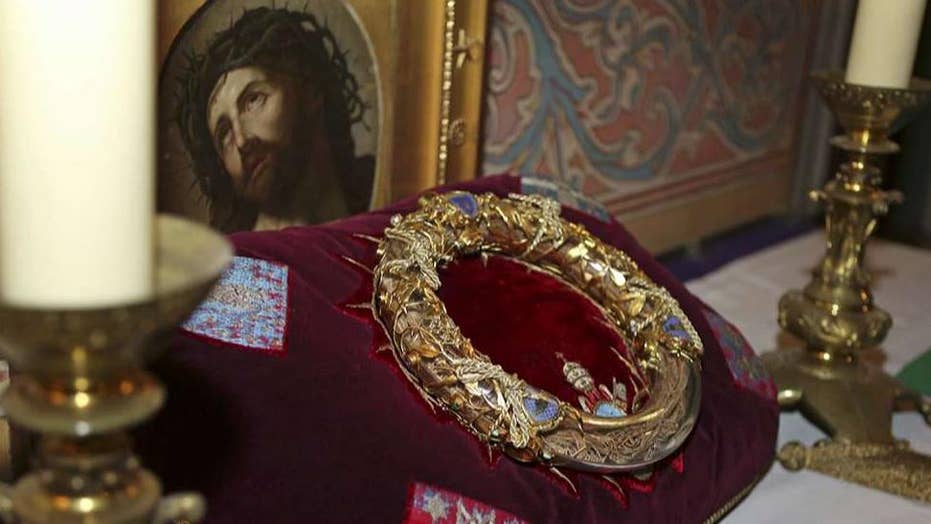 A French priest has been hailed a hero for saving the Blessed Sacrament and the Crown of Thorns from Paris' Notre Dame Cathedral during the blaze on Monday - but the fate of other precious treasures remains unknown.

The cathedral caught on fire Monday late afternoon amid renovations, threatening to destroy one of the greatest architectural landmarks in the Western world.

Paris fire chief Jean-Claude Gallet said the church’s structure had been saved after firefighters managed to stop the fire spreading to the northern belfry. The fire is being treated as an accident, with the Paris prosecutors’ office ruling out arson and possible terror-related motives.

PARIS, FRANCE - APRIL 16: Historical artifacts that were saved from Notre-Dame de Paris cathedral are stored in a room of the Paris City Hall on April 16, 2019 in Paris, France. A fire broke out on Monday afternoon and quickly spread across the building, collapsing the spire. The cause is unknown but officials said it was possibly linked to ongoing renovation work. (Chesnot/Getty Images)

Many people remain concerned about the possible permanent damage caused to the treasures inside the cathedral, including an iconic statue known as Notre Dame de Paris depicting the Virgin Mary and Jesus; and the Statue of St. Dennis.

The fate of the 17th-century portrait of St. Thomas Aquinas at the fountain of wisdom and the 1716 “Visitation” painting remain unclear.

At least three artifacts were confirmed to have been lost. Those include a separate fragment of the Holy Crown of Thorns, a relic of St Denis, and another relic of St Geneviève, the Guardian reported.

Jean-Marc Fournier, chaplain of the Paris Fire Brigade who also played a key role in supporting Parisians following the 2015 terror attack in Paris, saved the Blessed Sacrament and the Crown of Thorns (pictured) after he went in with the firefighters. (Getty)

But thanks to one French priest, there’s at least two artifacts that definitely avoided destruction.

Jean-Marc Fournier, the chaplain of the Paris Fire Brigade who also played a key role in supporting Parisians following the 2015 Bataclan terror attack, saved the Blessed Sacrament and the Crown of Thorns after he went in with the firefighters, Sky News reported.

“Father Fournier is an absolute hero,” an emergency services member said. “He showed no fear at all as he made straight for the relics inside the cathedral, and made sure they were saved. He deals with life and death every day, and shows no fear.”

The Crown of Thorns is believed to be a remnant of the wreath of thorns placed on the head of Jesus Christ at his crucifixion, which French monarch Louis IX brought to Paris in the 13th century.

The Blessed Sacrament, meanwhile, is a name for the body and blood of Christ in the form of consecrated bread and wine. It’s displayed on an altar in a monstrance.

Other artifacts that weren’t affected by the fire include the Rose windows, three round glass windows dating back to the 13th century. The Archbishop of Paris said all three have been saved. (Getty)

Other artifacts that weren’t affected by the fire include the Rose windows, three round glass windows dating back to the 13th century. The Archbishop of Paris said all three have been saved, BFM TV reported.

The Great Organ, originally built in 1403, has been saved as well as the Tunic of Saint Louis which said to belong to King Louis.

The True Cross and Holy Nails, the physical remnants from the cross upon which Jesus was crucified, were initially thought to have been lost in the fire, but French media reports say they were saved.