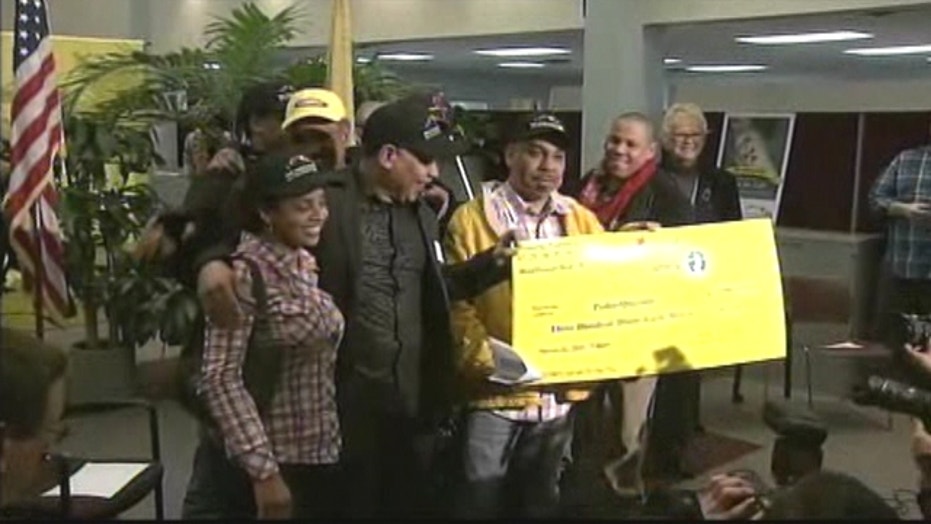 “I felt pure joy and happiness because I can help my family,” Dominican immigrant Pedro Quezada said at New Jersey lottery headquarters Tuesday afternoon to officially claim the prize.

Quezada showed up late Monday at the liquor store in Passaic, N.J., where he purchased the ticket to see if he was the winner. The ticket was validated at 4:17 p.m., giving him less than 24 hours to weigh his future as a multimillionaire before appearing at the news conference.

He and his wife, Ines, showed up dressed in jeans. Quezada moved from Jarabacoa, Dominican Republic when he was just 19 years old and has been in the country for 26 years. His wife is Mexican. He had owned a bodega in Passaic since 2006, working 15-hour days for the past six years, which he called “difficult.”

“You can only imagine. I would wake up every morning at 5 a.m. to open the bodega until 11p.m.,” Quezada said.

He said he had been in hiding since he won, and will remain under the radar.

“I went straight to a bank safety deposit box,” he said, as soon as he realized he had the winning ticket.

Quezada was initially asked questions in Spanish and answered in Spanish before they were translated. If Quezada takes a lump-sum payment, it would be worth $221 million, or about $152 million after taxes.

He’s still not sure whether he’s going to take the lump sum or not. It's the fourth-largest jackpot in Powerball history.

When asked whether or not he or his son would continue working at the bodega, he said no.

“He wants to, but he can’t,” Quezada said of his 23-year-old son who wants to continue working. “With all those millions, would you allow your child to continue to work at a store like that?”

Quezada, a father of five, described his family as “humble” and “poor.” He doesn’t know how he’s going to use the money, but he said he’d like a good car.

When asked what kind of car he drove now, Quezada responded: “My feet.”

He said he was unsure whether he will stay in New Jersey or move elsewhere.

When she got the call from him Monday, his wife of nine years said: "I had no words ... my heart wanted to come out of my chest."

Flanked by his brothers and his wife, Quezada spoke about playing the lottery two or three times a week. Sometimes he would choose his own numbers, other times he would do Quick Picks, like he did for the winning ticket. Despite winning the jackpot on Monday, the Dominican immigrant said he will continue to play the lottery.

“I’m searching for another win,” he said.

He jokingly said the number of cousins he has “keeps growing” since he claimed his prize.

“My life will change because it’s so much money,” Quezada said, “but it will not change my heart.”