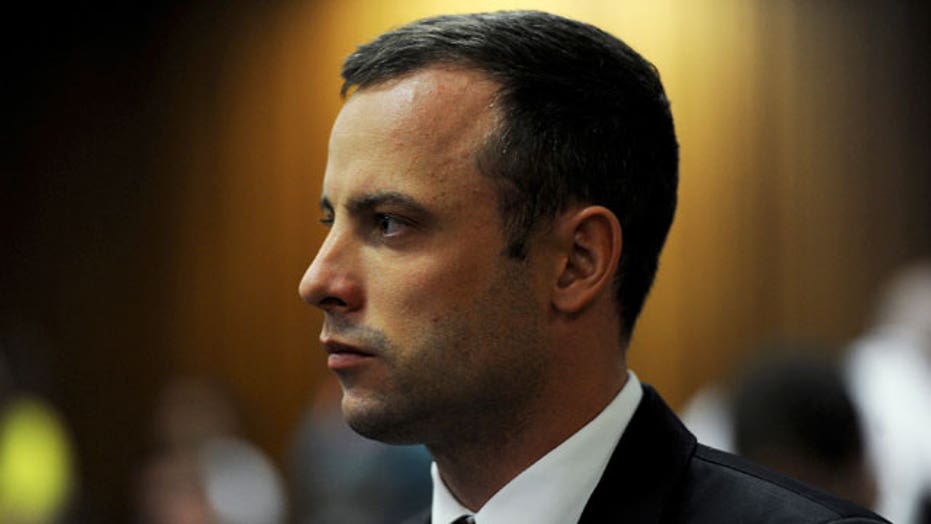 PRETORIA, South Africa – As the girlfriend he shot in the head lay dead or dying in his home, a weeping, praying Oscar Pistorius knelt at her side and struggled in vain to help her breathe by holding two fingers in her clenched mouth, a witness testified Thursday at the double-amputee runner's murder trial.

"I shot her. I thought she was a burglar. I shot her," radiologist Johan Stipp, a neighbor, recalled Pistorius saying. The worried neighbor had entered Pistorius' home after hearing screams. By that time, the celebrated athlete had carried Reeva Steenkamp's bloodied body downstairs following the fatal nighttime shooting in his bathroom.

A few minutes after he arrived, Stipp said, Pistorius went back upstairs -- the area where he had shot the 29-year-old model -- and returned. At that point, Stipp said he was concerned that the gun used in the shooting had not been recovered and that a distraught Pistorius was going to harm himself. The testimony did not address what Pistorius did when he went upstairs.

Stipp's account in a Pretoria court was the first detailed, public description of the immediate aftermath of the shooting in the pre-dawn hours of Feb. 14 last year. Pistorius is charged with premeditated murder after shooting Steenkamp three times out of four shots through the toilet door, with prosecutors trying to build a case that the Olympian intentionally killed Steenkamp after a loud argument.

At his bail hearing last year, Pistorius said in a statement read by his lawyer that after he realized he had shot Steenkamp, thinking mistakenly that she was an intruder, he pulled on his prosthetic legs and tried to kick down the toilet door. He said he finally gave up and bashed the door in with a cricket bat. Inside, he said he found Steenkamp, slumped over but still alive. He said he lifted her body and carried her downstairs to seek medical help.

On Thursday, as Stipp recalled the sometimes grisly details through questioning by the prosecutor, Pistorius bent forward on the wooden court bench and put his hand over his face. Clutching what appeared to be black rosary beads, Pistorius then moved his hands to cover both ears as Stipp described the scene at the athlete's villa sometime after 3 a.m.

Pistorius stayed that way for a while in the courtroom, even when one of his lawyers reached back and touched him on the head in an apparent gesture of reassurance.

"Oscar was crying all the time," Stipp continued. "He was praying to God, `Please let her live."'

"Oscar said he would dedicate "his life and her life to God" if she would live, Stipp said.

The chief defense lawyer, Barry Roux, asked Stipp if he thought Pistorius' emotions as the runner knelt next to Steenkamp were genuine. Stipp said he thought they were.

"He looked sincere to me," Stipp said of observing Pistorius minutes after he'd fatally shot his girlfriend. "He was crying. There were tears on his face."

Prosecutors contend that a person who has just killed someone might immediately feel remorse.

Stipp, whose house is behind Pistorius', said he had initially been woken by what he described as a woman's screams. After calling private security at the gated community, he said he decided he should go and try to help.

When he arrived at Pistorius' home, he saw that two other responders were already there -- a man standing outside and a woman near the front door as he walked in. He said he rushed right past them and went inside to see if he could be of assistance.

"At the bottom of the stairs ... there was a lady lying on her back on the floor," Stipp said of his first observations.

"I went near her and as I bent down, I also noticed a man on the left kneeling by her side. He had his left hand on her right groin, and his right hand, the second and third fingers in her mouth."

"It was obvious that she was mortally wounded," Stipp said. "She had no pulse in the neck, she had no peripheral pulse. She had no breathing movements that she made."

As a radiologist, Stipp is a medical doctor with years of study, and he said he used his expertise to try to save the woman -- even though he was fairly sure his efforts would be in vain. He noticed a wound in the woman's right thigh, in her upper arm and in the right side of the head, and there was brain tissue around the skull.

Stipp didn't know the man was Pistorius until later, he said. He had mistakenly thought Pistorius lived in a different house in the gated community.

Echoing the assertions of two other state witnesses in the trial, Stipp also maintained that he heard a woman's screams before and around the time of the gunshots.

That is a significant issue in the case. Prosecutors say there was a fight between Pistorius and Steenkamp and that she was screaming before and perhaps during the shooting. Pistorius says he was the only one to scream, mainly after realizing he'd shot his girlfriend by mistake.

Roux, the defense lawyer, described the head wound as "terrible, serious, devastating," arguing that Steenkamp could not have screamed during the gunfire because she would not have been able to.

"What I'm saying to you, when you heard screams, it could not have been the deceased," Roux said to Stipp. "It's medically impossible."

It is unclear, however, which of the four shots struck Steenkamp's head.