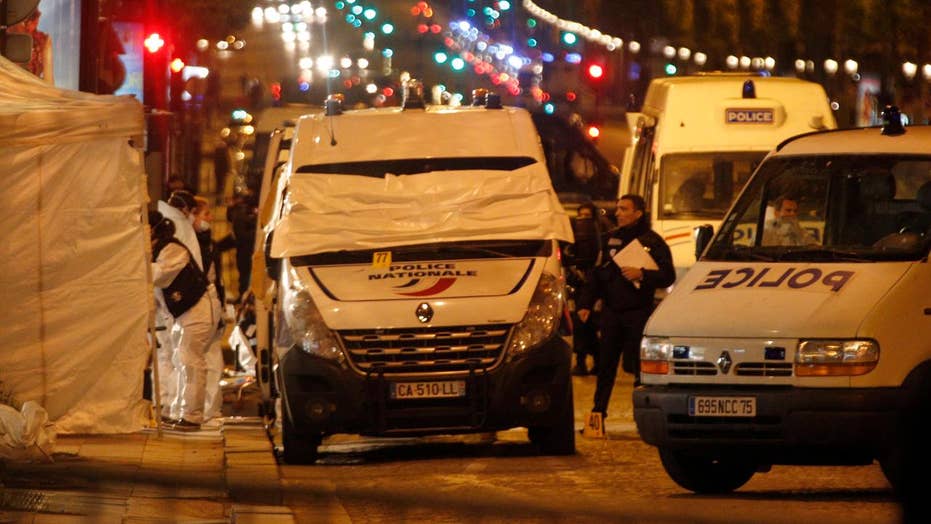 One police officer dead, two others and a bystander wounded

Investigators in Paris on Friday searched a home believed to be linked to the attack on police on the Champs-Elysees that resulted in the death of one officer.

The gunman, whom police shot and killed after he launched his attack, had been detained in February for threatening police but then freed, two officials told The Associated Press on Friday. He was also convicted in 2003 of attempted homicide in the shootings of two police officers.

The shooter, identified as 39-year-old Frenchman Karim Cheurfi, apparently acted alone in killing a police officer and wounding two others and a German tourist on Thursday night, a French official who discussed details of the investigation with the AP said on condition of anonymity.

The Islamic State group claimed responsibility for the attack and gave a pseudonym for the shooter, Abu Yusuf al-Beljiki, indicating he was Belgian or had lived in Belgium. The attacker opened fire on a police van on the avenue before he was killed.

The claim of responsibility came unusually swiftly for the group, which has been losing territory in Iraq and Syria.

Police found a pump-action shotgun, knives and a Quran in the car that the attacker used, and a handwritten note praising ISIS turned up nearby, The Guardian reported citing local media.

Searches were conducted in at least one suburb east of Paris after Thursday's attack. Police tape surrounded the quiet, middle-class neighborhood in Chelles early Friday, and worried neighbors expressed surprise at the searches.

Paris' iconic Champs-Elysees boulevard was back open and picking up its usual early morning routine Friday. Delivery trucks were making their rounds. Traffic was going up and down the famous tree-lined street and police barriers have been taken down.

France's presidential candidates have expressed their solidarity with police forces.

The 11 candidates were appearing on a television program ahead of the first round of voting in the two-part election when the attack occurred.’

The first round of the presidential race is scheduled on Sunday. The two top contenders will advance to a runoff on May 7.

U.S. Vice President Mike Pence said the shooting was the "latest reminder that terrorism can strike anywhere, anytime." He added that the U.S. "will not relent in our effort to end terrorism."

Australia's prime minister has offered his country's prayers for police officers who were shot in Paris and urged Australians in Europe to be wary.